China: Guangxi pollution spill may be worst in decades

20 tonnes of poisonous metal dumped into tributary of Pearl River

Disaster has struck again. Water supplies to millions of city residents have been put in jeopardy by yet another pollution scandal, this time on the Longjiang River in Guangxi province. The crisis began on 15 January, when several factories dumped cadmium and other industrial waste into the river. Cadmium is a carcinogen which can seriously harm the kidneys, bones and respiratory system. Due to bureaucratic bungling and suspected cover-up attempts, the 100-kilometer long toxic slick is still not under control despite clean-up efforts.

Rescue workers have tipped chemical agents into the water to break up the harmful metals, but this has only succeeded in neutralizing some seven tonnes of cadmium, according to Xu Zhencheng from the task force sent to the area by the Ministry of Environmental Protection. This leaves around 13 tonnes of the heavy metal still undissolved in the rivermore than two weeks after the disaster was first reported. Concentration levels of cadmium in the affected area remain more than 25 times above the official limit at the time of writing. 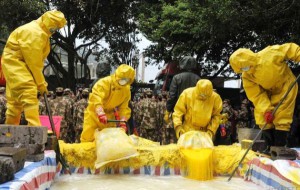 The chemical slick is flowing in the direction of Liuzhou city, home to 3.5 million people. The city has witnessed panic buying of bottled water, with supermarkets reporting sales of water at ten times normal levels, despite government assurances that the city’s tap water is safe for now. To dampen the growing anger among locals including fishermen, the government has closed a number of polluting factories along the river and arrested seven company executives. But this still falls far short of a comprehensive solution to the crisis.

Some experts say this could be the worst case of river pollution to have occurred in China for decades. Ma Jun, a Beijing-based environmental expert, described the pollution as serious because cadmium cannot dissolve naturally and may last a long time. Anger is growing among local inhabitants who are understandably skeptical to government assurances that water supplies are safe. As in previous cases of toxic dumping, the government is being criticised for lax enforcement of environmental checks and obsessive secrecy. Questions are being raised about why the Guangxi authorities have not yet identified the exact source of the contamination.

“It is apparently a glaring failure by local authorities to let the massive spill happen in the first place, not to mention the embarrassing fact that they cannot even pin down the pollution sources after two weeks,” said Professor Dai Tagen, an expert on metal pollution from Changsha.

Worsening environmental crisisThe Longjiang River disaster is the latest wake-up call showing the reckless methods used by many companies in China. The collusion of capitalists and government agencies to maximize profits while ignoring environmental laws has had catastrophic results. An estimated 980 million of China’s 1.3 billion people drink water on a daily basis that is partly polluted. Over 600 million people drink water contaminated with human or animal wastes and 20 million drink well water contaminated with high levels of radiation. Water pollution has been linked to China’s high rates of liver, stomach and esophageal cancer.More than four of ten rivers monitored by the government are so polluted they’re unsuitable for human contact, according to a recent central government report. There are also widely held misgivings about the accuracy of government figures. A February 2010 study by China’s Environmental Protection Agency (since upgraded to a ministry) found that water pollution levels were double what the government acknowledged them to be. This is mainly because agricultural waste was not included in the government figures (farm fertilizer is a bigger source of water contamination than factory effluent). 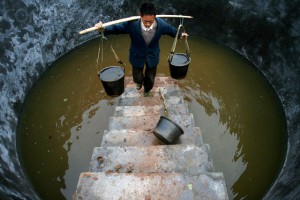 Concern is growing among ordinary people who fear that foodstuffs are poisoned, air quality is deteriorating from bad to terrible, and industrial policies disregard the environmental or social impact. In one study by the Lowy Institute for International Policy and the MacArthur Foundation, 75 percent of Chinese people said environmental problems such as climate change were a major threat to China’s security, a much higher proportion than those who thought the US posed a security threat (50 percent), and Japan (45 percent).

The last year has seen a series of massive protests against polluting factories or construction projects, such as the 14,000 who marched in Dalian in August and over 20,000 who demonstrated for three days in Haimen in December. The central government is so anxious about environmental protests and their potential to become political, including raising demands for democracy, that they no longer issue detailed statistics for pollution-related ‘mass incidents’. However, Chinese media report there was a 30 percent upturn in such protests last year, and the total number of protests must surely be counted in thousands.
Socialists and the chinaworker.info website call for full democratic control over industry, land and natural resources, by elected committees of workers and poor farmers, with full freedom of activity for political parties and groups and an end to one-party dictatorship. Workers need to build independent unions to fight for control over workplace health and safety, and to secure investment in safe and environmentally sustainable production methods. Only a socialist mass movement to reorganize the economy in the interests of the majority, shifting to clean energy alternatives under a democratic plan of production,can end today’s worsening environmental crisis.
Share
Facebook
Twitter
WhatsApp
Print
Telegram