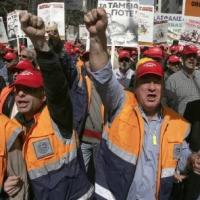 Anger spilling over against troika austerity

After Tuesday’s 24-hour general strike in Greece, the situation has escalated rapidly. While the capitalist politicians, after some token hesitation, have signed up lock stock and barrel to the Troika’s second ‘bailout’ and brutal austerity attached to it, the working class is lining up for a battle.

Unions have called a further 48-hour general strike to take place on Friday and Saturday 10 & 11 February, combined with mass rallies at the Greek parliament. Under intense pressure to organize action, even those union leaders aligned with the government parties, including PASOK, have supported the action. Even the leader of the union linked with the right-wing New Democracy government has resigned his membership of the party and adopted an anti-government position.

These developments all point to the growing popular opposition to Troika policies and the determination of working people to resist them. More reports and material to follow…