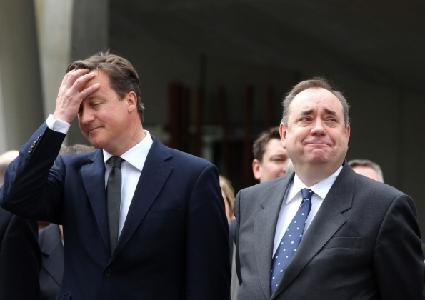 Scottish National Party’s version of independence a nightmare for workers

The following article by a Scottish CWI comrade gives a good example of how Marxists approach the national question. It has lessons for the situation in Taiwan, China and Hong Kong. Even in the oldest capitalist states the national question is far from resolved and can erupt into new conflicts as a result of the capitalist crisis. This is a crucial question in Scotland, where support for independence from Britain is now significant, including among big sections of the working class, as a result of neo-liberal attacks over many years.

National tensions over the issue of Scottish independence were raised significantly following the blundering intervention of David Cameron, the British Prime Minister, and the Conservative & Liberal Democrat (ConDem) coalition government this week.The UK Westminster government attempted to force the hand of the Scottish National Party (SNP) Scottish administration into holding a referendum within the next 18 months, rather than SNP First Minister Alex Salmond’s preferred option of late 2014.

Crucially, the ConDem’s have insisted that a single yes or no question on the issue of Scottish independence form the basis of the referendum. This is also counter to the SNP’s current desire for a multi-option poll including a choice of “devolution max”.

The ConDem’s also oppose the idea that 16 and 17 year-olds be given a vote in the referendum, which the SNP government support. Ironically, the Lib Dem’s official policy is for votes for 16 and 17 year olds. The Socialist Party Scotland fully supports the right of 16 and 17 year-olds to vote in all elections, These three sticks or “strings” as Salmond has described them were wrapped up in the carrot of allowing the Scottish government to carry-out a “legally binding” independence referendum. Rather than the consultative one that the current devolutionary arrangements permit.

The SNP leadership lost no time in describing Cameron’s intervention as being “Thatcher-esque”. The Tories were operating in a “London knows best fashion, trying to dictate the rules for a referendum for which they have no mandate”.

Cameron and his LibDem Scottish secretary Michael Moore quickly dropped the insistence that a referendum had to be held within 18 months, but by then the damage, from their point of view, had been done. In fact Moore’s statement to the Westminster parliament described the SNP’s proposal’s as “unlawful” and still leaves open the possibility that the Westminster government could organise an independence referendum over the heads of the Scottish parliament. Such a “nuclear option” would result in a ratcheting up of national tensions as well as a likely boycott of such a poll.

As it is the crass intervention by the ConDem’s has boosted the standing of Salmond and the SNP and probably support for independence as well. Burned deep into the Scottish national consciousness, and particularly among the working class, is the memory of the brutal anti-working class Thatcher regime. The hated poll tax and her government’s refusal to recognise the rights of the Scottish people to self-determination resulted in the obliteration of the Tories electoral base. Today the Tories have only 1 MP in Scotland, outnumbered by the two Giant Panda’s recently gifted by the Chinese government and currently residing in Edinburgh zoo.

The ConDem attempts to dictate the terms and rules for the referendum have been a gift for the nationalists in Scotland, who will have gained at least temporary credit for “standing up” to the Tories. Of course Salmond’s refusal to bow to the pressure over the referendum does not extend to refusing to implement the ConDem cuts in Scotland.  To a penny, all £3.7 billion of Tory/Liberal cuts have been inflicted on the people of Scotland by the self-proclaimed “Scotland’s party”.  Salmond and John Swinney’s opposition to the mass strike on N30 when the SNP leadership crossed the picket lines is also an indication of the role the SNP will play in any future independent Scotland in defending the interests of big business.

It is nevertheless possible that the SNP and Cameron will come to an agreement. This could include that the powers will be transferred to Holyrood to allow a “legal” referendum. The major difference is likely to be over the timing, which Cameron and co will probably have to live with, and the SNP’s preference for a multi-option referendum.

Lying behind Cameron’s intervention is the calculation that an independence referendum would be defeated if held now or soon. That’s why both the Tories and now Labour have come out for a “quick resolution to this issue”. They hope that the SNP can be defeated over independence and a stabilisation of the national question can be achieved.

Salmond and the SNP also understand that with independence currently supported by around one-third of the Scottish people, it is better to delay a referendum until late 2014. They hope that the impact of the economic crisis and the savage cuts will be blamed on the ConDem’s and the lack of powers for the Scottish parliament, bolstering public support for more decisive constitutional change.

It’s for this reason that the SNP are still holding-out for the prospect of a multi-option referendum. In fact they are the only party in Scotland who support a question being asked on extended devolution. They believe that even if independence was defeated, the current overwhelming public support (68% in the most recent poll) for a major extension of powers over tax, benefits, the minimum wage etc would see them in a win-win situation. “Devolution max” or “independence lite” is a safety net for the SNP which they would claim as another step towards independence at a future stage.

“Civic Scotland”, including the voluntary sector, a number of trade unions and the churches are to establish a body to define “devolution max” and push for this to be included as an option on a ballot.

Ironically despite Cameron, Milliband et al’s insistence on a single question on independence, a multi-option referendum could also be benificial for the British ruling class as well. By allowing a question that would draw support away from outright independence it could help avoid the instability and loss of prestige that the break of the UK would mean for British capitalism.

If the run-up to 2014 saw a significant rise in support for independence even the Westminster parties could back a third option, to act as a lightning conductor, in an effort to avoid a majority for independence.

The SNP leadership, pro-capitalist to the core, have long accepted a “gradualist” path to independence. They would happily settle for a form of extreme autonomy, within a newly designed federal UK state. Salmond has already made clear that an independent Scotland would maintain the Queen as head of state and keep the Pound as the Scottish currency, with a pledge to hold a referendum on joining the current crisis-ridden Euro at a certain stage. Salmond wants to use powers over corporation tax to reduce the “burden” on big business and encourage a low tax haven for inward investment. Their vision of an independent Scotland would be a nightmare for the majority of working class people and their families.

It is essential that a working class alternative is urgently built to the capitalist and cuts consensus among Scotland’s political elite, including the SNP. Any attempt to block the democratic rights of the Scottish people by the ConDem’s should be opposed, if necessary using the full power of the trade union and labour movement as witnessed on November 30th. A multi-option referendum is a genuine democratic right which the Socialist Party Scotland fully supports and cannot be traded as a bargaining chip by either government in Westminster or Holyrood.

The Socialist Party and our forerunner Militant have a long history of defending the democratic rights of the Scottish people. We supported the setting up of a parliament (Assembly) in the 1979 referendum and again in 1997, despite the lack of substantial powers. Today we fight for a parliament with full powers. A parliament that could nationalise the major sectors of the Scottish economy including oil, the power to increase the minimum wage to end poverty pay, increase benefits to provide a living income for all as well as tackling the obscenity of nuclear weapons by removing Trident from the Clyde.

However, with the SNP and the rest of the political establishment committed to defending the interests of capitalism we also need to build a new mass party of the working class to fight for a socialist majority in the parliament. prepared to use the powers in the interests of the working class. The Socialist Party Scotland has played a leading role in the setting up of the Scottish Anti-Cuts Coalition which will be standing candidates across Scotland in May.

A socialist Scotland is the only sustainable answer to the nightmare of cuts and austerity. Central to this task is the need to stand implacably for the maximum unity of the working class across Scotland, England, Wales and Ireland and to oppose any attempts to divide the workers’ movement on national lines. A voluntary and democratic socialist federation of these states as a step towards a socialist Europe to end the nightmare of austerity, cuts and capitalism once and for all.