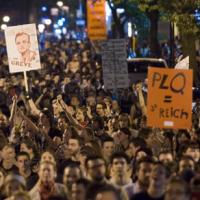 “Students have been striking for over 110 days.”

Joshua Koritz, first published in “Justice”, paper of Socialist Alternative (CWI supporters in the US)

Joshua Koritz traveled to Montreal, Quebec to witness the student struggles firsthand and report for Justice. Here we interview Julien Daigneault, a member of Alternative Socialiste (CWI Quebec) about the student strike, politics and perspectives.

Tell us about the student movement in Quebec. Why are students fighting?

The basic demands are: the students won’t accept any tuition hikes at all. The previous round of tuition hikes from 2007 is still being enacted and will finish in 2013. The government wants to raise fees on top of those hikes by 75% in 2012.

People are angry because they want accessible public education, and are willing to fight to ensure it is accessible to everybody. They don’t want money to create separate education for the rich and for the poor.

In the last student fights against the hikes of tuitions fees in 2005 and 2007, the government successfully divided the movement on the basis of the combatively of the national federations. They were able to get concessions from FEUQ and FECQ.

How or why has the movement been able to last this long?

The unity of the coalitions has made it possible. CLASSE linked this struggle with the other austerity measures from Prime Minister Charest’s Parti Libéral du Québec (PLQ) government, which is very unpopular. Charest’s government has been completely intransigent and refuses to make any concessions.

The example of the 2005 student strike, which up until this year the largest student strike in Quebec history and was a semi-victory, showed the power students have in strike action. In the face of the intransigence of the government, struggle is the only option available.

There have been four or five attempts at negotiations with the government, all of which have failed. The tactics of the government in negotiations has only energized and united students further. The government tried to divide the movement and get FEUQ and FECQ to compromise by proposing concessions to their demands relating to the management of universities, which the government would cynically use to pack administrations with businessmen to further corporatize education.

How has Law 78 affected the movement?

The new Law 78 is a response by the government to the constant demonstrations and constant pressure including hundreds of demonstrations and activities. It forbids people from “preventing people from attending their classes.” So if you picket or demonstrate in a place that could prevent a person from going to class, you will be fined thousands of dollars. For unions and official spokespersons, the fines are hundreds of thousands of dollars.

At the moment, the government is using Law 78 to attempt to crush demonstrations and to brutalize people. The birth of the casserole movement represents a direct challenge to the government being able to enforce this law. Every night, for over 40 nights in a row, at 8pm people bang on their pots and pans and demonstrate on the street.

What is the attitude of workers in unions (not students)?

From the beginning, all the major unions have supported the student strike and have positions against the tuition hikes. The FTQ (Fédération des travailleurs et travailleuses du Québec), the biggest federation in Quebec, is even for free education.

CLASSE, for its part, consistently reaches out to broaden the struggle. On April 14, they organized the first demonstration with the slogan “It’s a student strike, and a popular struggle.” This strategy worked, leading to huge rallies with unions.

At the beginning of the strike, unions gave mainly financial and logistical support. Building on April 14, further demonstrations have been organized, such as on May 22, the biggest demonstration ever in Quebec. However, the trade unions mostly give moral support rather than real support for the struggle by helping mobilizations.

Law 78 is changing things a bit. It reactivated the debate around a general strike in the labor movement. Workers were sympathetic to the students, but they didn’t see it as their struggle. Now, with Law 78, it becomes their struggle more and more every day. But at this point, there is not an organic struggle together between students and union workers.

How is Québec Solidaire (QS) interacting with the movement?

In Quebec, there is no working-class party, there is no union party. Alternative Socialiste argues that Québec Solidaire should take steps to become a party by and for working people. It is already a left-wing challenge to the pro-austerity parties and has one member of the Quebec parliament.

There is a fear among social movements to be co-opted by a political party. This shows the anarchist influence in the movement. They don’t want to have anything to do with the political sphere, instead believing that “the power is in the street,” and that’s it. So they confine themselves to that role and it is sufficient for them.

It is ridiculous that in this coalition against austerity, which is composed of over 100 associations, most of the spokespersons are members of QS – yet they all argue that the movement can’t be affiliated to a political party and yet they already are!

What tactics and strategy would be necessary for students to win?

In August, students must refuse to return to class and continue to build mass demonstrations involving the larger trade union movement.

A general strike should be organized to pose the question of power and who has the legitimacy to have this power. This could bring down the government and force early elections, which would be seen as a referendum on the tuition hikes.

Everything must be done to point out that we must get this government out. This will of course lead to the question of what party will lead the next government. Only Québec Solidaire is firmly against austerity and it should present itself as the political force that can be our voice in parliament.