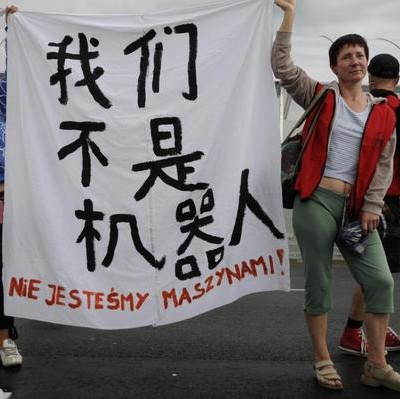 chinaworker.info is a campaign website for independent trade union and labour rights in China. We have heard from the union, Inicjatywa Pracownicza, that the factory of Chung Hong Electronic (Poland) , a supplier of LG Electronics Polan, in  Biskupice Podgórne in the Special Economic Zone near Wroclaw is abusing labour rights and attacking workers’ union  Inicjatywa Pracownicza (Workers’ Initiative).

We have known that the Chung Hong workers and their union,  Inicjatywa Pracownicza, have been in labour dispute with the employer for over two months. Workers are demanding for wage increase, restoration of the social fund, reduction of the annual overtime limit, restoration of free transport for workers, and better arrangements of workplace and work shift. Workers also demand that the employer recognize the union and offer the union office.

However, the employer refuse workers’ demand and further negotiation. In mid of June, the workers hold several meeting, and most of workers voted for strike on June 28th’s referendum. A few days later, the worker’s representative,  Krzysztof Gazda, was sacked by the employer illegaly. Then, dozens of workers have launched the strike from that day for their demands and reinstatement of  Krzysztof Gazda to worker. On July 10th, another twenty four workers, who have been involved in the strikes, were also collectively dismissed. They have been violently driven away by the security guards.

The employer, Chung Hong Electronic Company, is rampantly in breach of Polish labour and union law. It also brutally attack freedom of association and basic democratic rights. We also believe that LG Electronic (Poland) and the Polish government should also be responsible for these anti-workers activities.

Chinaworker.info expresses great concern about current situation of the workers and would like show solidarity with them. We urge the employer immediately reinstate twenty five workers,  and meet their demands for wages, social funds, working condition, trade unions and etc. We also urge all unionists and socialists globally to support Chung Hong workers’ struggle. 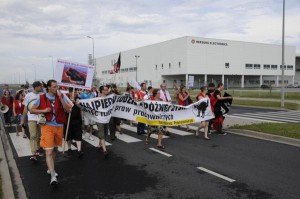 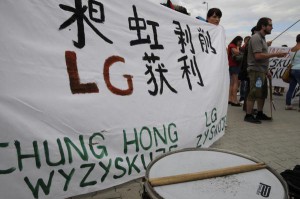