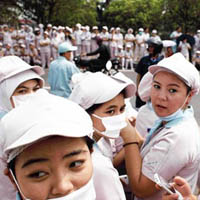 “Workers unite! We can’t be defeated!”

Indonesia, Southeast Asia’s largest economy, was hit by a massive a one-day strike on Wednesday October 3. A joint statement issued by several union organisations said a total of 80 industrial estates in 24 cities were impacted by the strike, in which almost three million workers participated. Tens of thousands joined street marches to protest against outsourcing and to demand increases in the minimum wage. A sharp rise in the hiring of temporary contract workers has been used by the capitalists to hold down wages and cheat workers out of job protection.

“Workers unite! We can’t be defeated!” was one of the chants taken up by an estimated 200,000 workers marching in the huge industrial region of Bekasi, outside Jakarta. There were also demonstrations in Medan (Sumatra), Tangerang (West Java) and Surabaya (East Java).

The workers’ demands include an increase in the minimum wage, health insurance and social security for all employees, and a change of the laws allowing companies to hire temporary contract workers.

“Outsourced workers get nothing,” protested Ridwan Pandjaitan, a shop steward for the United Federation of Indonesian Metalworkers at carmaker Mitsubishi in east Jakarta. “Too many companies don’t want to take on permanent employees because they have to pay pensions and give workers other rights,” he told the Financial Times.

The president of the Confederation of Indonesian Workers Union, Said Iqbal, said unions had given the government of president Susilo Bambang Yudhoyono a deadline of 15 October to ban outsourcing. An earlier union deadline over outsourcing has not been met despite a high court decision supporting the unions’ demand.

There are 16 million outsourced workers in Indonesia, which is roughly 40 percent of the labour force according to the Jakarta Globe (October 4). Capitalism, especially its neo-liberal variant, demands that workers forego permanent contracts, pensions, wage rises and welfare benefits in order to get jobs. Meanwhile, the wealth of Indonesia’s capitalist elite has increased dramatically.

Indonesia’s Gini index, a measure of inequality used by the United Nations, has risen from a reading of 0.31 in 1999 to 0.43 today (the higher the reading, the more unequal society has become). Except for the rich, all layers of the population – the middle class as well as the poor – have suffered a declining share of gross domestic product.

The hiring of contract workers and outsourcing has exploded around the world in the past two decades as the capitalists look for ways to maximize profits, squeeze labour costs and weaken the power of workers’ unions. China is a case in point, with ‘the world’s factory’ built upon outsourced and non-union migrant labour. But a similar two-tier labour force is a feature even of advanced economies like Japan, where 40 percent of the workforce is now made up of irregular contract workers. The struggle against this practice – to bring all workers under union agreements and permanent contracts – has become a major battleground in many countries as shown by recent strikes in the motor industry in South Korea.

The results can be seen in workers’ pockets. Indonesian workers are now known as one of the cheapest labour forces in Asia. According to the Asian Development Bank monthly wages in Indonesia average US$113, less than half the level in Thailand and a third of the level in China. Under capitalist globalisation this process is described as a race-to-the-bottom. Indonesia has the dubious honour of winning this race!

So much so that even Taiwan-owned Foxconn, whose factories in China have been hit by riots, strikes and worker suicides, recently announced plans to build a plant near Jakarta with a US$5 billion investment. Foxconn is the main global supplier of iPhones and other electronic gadgets to Apple, the world’s richest company.

Workers are feeling the pain in Indonesia. Inflation and especially higher food prices have eroded living standards. There is no statutory unemployment insurance and the jobless rate is officially 6.6 percent. The demand for an increase in the minimum wage was a major issue in Wednesday’s strike action. “In Jakarta, to have a decent living, a worker must get a minimum wage of 3,750,000 rupiah a month, but we only get 1,529,150 rupiah,” one worker told Australia’s ABC.

It is no surprise that Indonesia has seen a rising tide of strikes this year. This may grow into even bigger struggles following the success of this one-day strike. Clearly, workers have a sense of their collective power. This is especially so after last year’s groundbreaking three-month strike at the Freeport gold and copper mine in West Papua, which resulted in big wage rises for the workers.

The struggle against outsourcing has even led to contract workers taking permanent employees hostage, as happened at Japanese-owned company JST in Bekasi in September. Over 400 were taken hostage, including eight foreign employees, in an action organised by the metalworkers’ union to press its demand for 500 non-regular workers to be upgraded to permanent employees.

The Financial Times (October 4) interviewed a striker at the Yamaha piano factory in Pulo Gadung, East Jakarta, who explained “many employees can work for five years without being given any proper rights.”

The government appeared to offer concessions after Wednesday’s strike, although at this stage these are conspicuously short on detail. The Minister of Economy, Hatta Rajasa, said the government would draft regulations to raise wages and improve conditions for workers lacking fixed contracts. Only sustained mass pressure can force the government to turn words into deeds.

“Yesterday was only a foretaste,” declared Obon Tabroni, a metalworkers’ representative in Bekasi. “If the new regulation fails to address our demands then we will strike again.”

At the same time the capitalists and their politicians are warning that strikes and worker militancy will “scare away” foreign investment and jobs. Right-wing think-tanks like the Organisation for Economic Co-operation and Development (OECD) complain about the ‘rigidity’ of Indonesia’s labour law (a relatively soft reform implemented under president Megawati a decade ago) and call for greater ‘flexibility’ in the labour market – read: more outsourcing!

The Wall Street Journal (October 3) quoted the head of Indonesia’s investment board, Chatib Basri, saying “wages in Bangladesh are one-fifth of wages in Indonesia, which means there’s no way Indonesia can produce competitive garments by comparison.”

This is an example of how the capitalist race-to-the-bottom works: placing workers in different countries in a vicious downward auction. The capitalists will continue to play this game unless workers get organised and defeat them at their own game, by linking up and uniting across national borders. This shows the need for an international socialist workers’ movement and for democratic public ownership and control over the economy, to be run in the interests of the majority not the few.