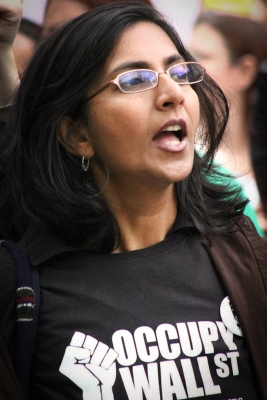 Press release of Socialist Alternative (CWI supporters in the US)

Kshama Sawant, the Occupy-inspired Socialist Alternative (CWI supporters in the USA) candidate for Washington State House, scored 27% against Democratic incumbent Speaker Frank Chopp. With half the votes yet to be counted, Sawant is predicted to win over 20,000 votes – the highest vote for an openly Socialist candidate in Washington in decades, and Frank Chopp’s strongest challenge during his entire 18 years in office. This follows the historic lawsuit by Sawant that compelled the Washington Secretary of State, the Attorney General, and King County to print her party preference, Socialist Alternative, on the ballot.

“We achieved this election result as an openly Socialist campaign that was largely ignored by the corporate media, with no corporate donations, on a shoe string budget,” explained Sawant. “Occupy gave a voice to working people’s rage at Wall Street, and our campaign gave voice to mass anger at the corporate politicians. It shows the potential to build a powerful left electoral challenge to the two corporate parties.”

“This vote sends a clear message to Frank Chopp and the political establishment – we are coming after you. We are reaching out to other progressive forces to form a united left slate of independent working-class candidates to run a vigorous campaign for Mayor and every open City Council position in 2013,” Sawant stated. “Wall Street has two parties – working people need a party of our own.”

The Democrats who control the state government are likely to implement further budget cuts to social services next year while they allow corporations such as Boeing and Microsoft to get away without paying barely any taxes. Sawant, a professor of economics at Seattle Central Community College and union activist, commented: “Alongside left electoral challenges, public sector unions like mine need to prepare for strike action against cuts. Ordinary people need to be ready to occupy City Hall and the Olympia state capitol building against attacks on our living standards.”

Election night saw mass celebrations erupt in the streets of Seattle after the passage of Referendum 74 upholding marriage rights for same-sex couples. Speaking from atop a make-shift sound truck, Sawant addressed a crowd of over 2,000 people: “If you think that the Democratic Party politicians did this for you, let me tell you it was us that won this! The fight for LGBT rights has just begun, we still need to fight poverty, homelessness, and workplace discrimination.”