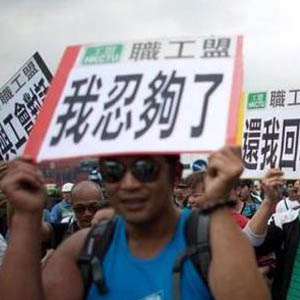 Fifteen years without a pay rise – “We are like slaves of the company!”

A very determined strike by 450 Hong Kong dockworkers at the Kwai Tsing container terminal has partly paralysed the world’s third-busiest container port. This is the biggest labour dispute for six years in China’s richest city and has exposed the sharp class divisions that the ruling establishment tries to deny. What the Wall Street Journal describes as a “crippling strike” shows the potentially awesome power of the working class when it acts and takes the road of collective struggle. Ships headed for Hong Kong, the gateway to southern China’s manufacturing heartland, are facing delays of up to 60 hours, which will “ripple across the global supply chain, adding to costs as ships are forced to reroute”, reports the New York Times.

The workers’ demand for a pay increase of around 20 percent, after 15 years in which wages have not increased while inflation has eroded their ability to provide for their families, has resonated with wide layers of the public. Groups of workers, youth, students, and ordinary citizens, have flocked to support the strike donating money and food. The strikers’ union, the Confederation of Trade Unions (HKCTU), has so far received over 3.5 million Hong Kong dollars (US$451,000) in donations for the strike. Socialist Action, the supporters of the Committee for a Workers’ International (CWI) in Hong Kong, have so far collected HK$36,000 (US$4,600) for the strike through our street meetings and public collections.

“We can no longer tolerate the exploitation,” striking dockworker Mr Po told us. “The employers are using blackmail to try to discredit our strike. We are only asking for a reasonable salary. Their offer of only five percent increase is an insult to us.”

The port owners who are reporting losses of 5 million Hong Kong dollars a day (US$644,000) have refused until now to enter negotiations. The first negotiations will reportedly take place on 10 April – day 14 of the strike – a sign that the port operator, Li Ka-shing’s Hutchison Whampao, are feeling the pain and must abandon their previous stance that the strikers are outsourced and have “no relationship” with Hutchison and its subsidiary Hong Kong International Terminals (HIT).

The strikers account for 40 percent of the workforce at HIT’s five terminals and the strike has halved the volume of port cargo, according to local media. The breakthrough in forcing HIT to come to the negotiating table should also be viewed with some reservations, however, as the company clearly wants to try to play off the strikers’ union HKCTU against members of HKFTU and HKFLU who have not joined the strike and whose union officials have a record of collaboration with the management. The FLU last week announced its members would work to rule, undoubtedly a sign that these workers sympathise with the strike and share its concerns over reduced wages and bad conditions.

Since 1995, when the outsourcing system was introduced, Hong Kong dockworkers’ wages have fallen in real terms, as the graphic below shows.

8th wealthiest in the world

It is of particular significance that the striking workers are fighting tycoon Li Ka-shing, who with a personal net worth of US$31 billion according to Forbes is the world’s eighth richest man. HIT is a subsidiary of Hutchison Port Holdings, the world’s largest port operator handling over 8 percent of global cargo. HPH is in turn a subsidiary of Hutchison Whampao, which is Li’s flagship conglomerate spanning from telecom companies to property. Li not only owns 70 percent of Hong Kong’s port, but also large slices of the city’s property market (Li’s Cheung Kong Holdings built one in seven homes), plus hotels, telecom, news media, energy, retailing and transportation, making his business empire an easy target for solidarity actions. Already student groups have begun targeting Li’s supermarket chain ‘Park n Shop’ for boycott protests. CWI supporters in Sweden staged a solidarity action against Li Ka-shing’s 3 mobile phone network. Hutchison also own ports in more than 20 countries including Australia (Brisbane and Sydney), Britain (Felixstowe and Harwich), Germany (Duisburg), Belgium (Willebroek), Malaysia and China.

One strategy HIT/Hutchison is now using is to re-route more business through nearby Shenzhen port, in which it also has an ownership stake. While extremely complicated due the total lack of union rights and democratic rights in mainland China and the ever-present risk of repression, the HKCTU should appeal for solidarity action from the Shenzhen dockworkers, not to handle re-routed cargo, pledging in return to energetically seek international protests in the event of sackings or repression against such action by dockworkers in China. The Hong Kong port strike has already received significant international solidarity including from the International Transport Workers’ Federation (ITF). Further messages of support can be sent to the address below.

HIT/Hutchison’s deceitful methods have been exposed time and again during the strike. News reports show that Yim Lui Fai, managing director of HIT, is also a director of one of the port subcontractors embroiled in the strike – a fact the company did its utmost to conceal. Despite HIT claiming it is not party to the dispute, it was HIT that went to court to obtain an injunction banning striking workers from ‘trespassing’ in the terminal area. Hong Kong’s British-originated legal system has demonstrated its true class bias, with grossly overpaid High Court judges (making HK$210,000-per-month) helping the bosses to undermine workers’ legitimate right to strike.

The pro-establishment Federation of Trade Unions (HKFTU) has exposed itself to further shame in this conflict. The strike erupted after FTU negotiators went over the heads of the dockworkers and brokered a ‘deal’ with management for a desultory five percent increase. A further incident exposes the degree of collaboration between the port bosses and the FTU bureaucracy: it transpires that Yau Mei-kwong, a leader of FTU’s Container Transportation Employees General Union is also a manager of Global Stevedoring Service, one of the port subcontracting companies involved in the dispute. The FTU is the local affiliate of the Chinese dictatorship’s puppet union federation in mainland China, and notorious in Hong Kong as a company union. The striking dockworkers are mostly members of the HKCTU, allied with Hong Kong’s pan-democratic (Beijing critical) political parties.

Hong Kong port is known as one of the world’s most efficient. But this is based on increased exploitation through the system of outsourcing and contract work, which has been used by bosses to undermine pay, conditions and job protection. Hong Kong dockworkers toil long hours without a break sometimes for days at a time. Crane drivers are normally not allowed to leave their control cabins high above the ground even for toilet breaks. They relieve themselves above ground. Workers told us that even when typhoon signals have been sounded they have been ordered to keep working until their work is finished. Overtime is paid only at normal rates. “We are like slaves of the company”, exclaimed Mr Po.

Resentment over working conditions runs deep. A tally clerk called Guo told us: “The lounge has no air conditioning, no running water, and is infested with rodents and insects. The environment is worse than [underneath] the flyovers.”

CWI supporters and the strike

Socialist Action comrades have been active from the start, with our own tent at the strike and daily participation in strike activities and discussions. There are also a number of student organisations and NGOs playing an active role in the strike. While all support is to be welcomed, unfortunately some of these groups have prefered to dominate discussions and activities, not sufficiently engaging the striking workers or allowing them to speak for themselves. Socialist Action has stressed the importance of regular mass meetings of strikers, which can be used to attract non-striking workers into the strike. Such meetings with democratic participation of all striking workers are also the key to keeping a high level of active participation which is a precondition for success.

Socialist Action fully supports the workers’ demand for a 20 percent pay rise – for the full claim and not a cent less! We call for an end to outsourcing and the contract labour system – for workers to be upgraded to direct employees. We also demand legal recognition of union collective bargaining rights, which were abolished in 1997. Kick out the Hutchison Group – for public ownership and democratic control by the working class of the terminal business. 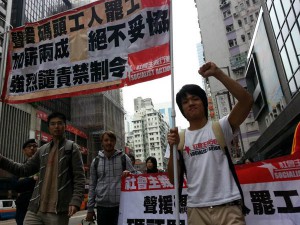 Kindly also send a copy of your solidarity message to Socialist Action/CWI for our own reference: