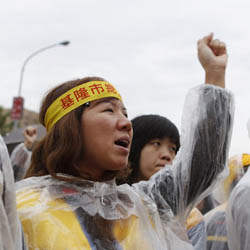 Around 20,000 Taiwanese workers used this year’s May Day to rally against austerity and cuts to the pension. Workers weaved through the central Taipei city streets today , despite the cold weather and pouring rain, chanting ‘defend the pension!’ and ‘stop corruption!’.  A CWI Taiwan contingent also marched in the demonstration today in central Taipei.

Laid-off workers – ordered by the government to repay retirement payments given as loans 16 years ago – began a hunger strike earlier this week outside the Council of Labor Affairs. Today they attended the May Day march in wheelchairs, weak from deprivation. These workers are symbols of the horrors of austerity, in which bankers destroy lives and get bonuses but the poorest are constantly ordered to pay more. They were strongly supported by other workers today.

Many workers were pleased with the involvement of the CWI in the day’s events. The CWI Taiwan contingent got a particularly warm response from members of the Taiwan Radical Nurses Union, who are battling against long hours and out of control nurse-patient ratios.

The government demonstrated its nervousness about workers’ response to its attacks on the pension by erecting giant military-style barricades around certain buildings. These and riot police added a strong feeling of menace to the day’s events, and reminded protestors that the days of the Kuomintang military dictatorship were not so long ago.

The government needn’t have worried. Union leaders kept the mood low and broke up the march almost before it had finished. Despite the presence of wheelchair-bound hunger strikers and older workers furious at attacks on their standard of living, union leaders abruptly ordered the demonstration to disperse.

A small number of youth came to support the protesting workers. A school student comrade made the point that many more youth in Taiwan will have to mobilise in the future to fight capitalism and achieve social change.

This week has seen the government step up its bold and violent attacks on workers, pensioners, students and communities like that in Miaoli (scene of a long and bitter struggle by textile workers last year). Fighting for an end to attacks like these means fighting against capitalism. This system insists on exploitation and austerity, and can’t handle the sort of democracy demanded by workers today. Any struggle for workers’ rights must be linked with the need for an end to capitalism!