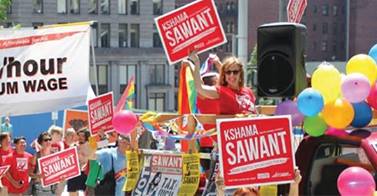 Two Socialist Alternative candidates sent historic shock waves through the United States on 6 November. Both candidates, Kshama Sawant, in Seattle, and Ty Moore, in Minneapolis, mounted the strongest election campaigns by open socialists in a major US city in many decades.

Only initial results have been announced, and more ballots are being counted in the next couple of weeks. At the moment, both races are too close to call. Moore is down by only 130 votes. Sawant is down by only 4% in the initial count of an estimated 38% of the total ballots expected, with the remaining ballots likely to trend strongly in Sawant’s favour.

Regardless of the final count, the votes for these firebrand socialist candidates illustrate clearly the vacuum in US politics and the anger at the corporate-controlled Establishment.

Rooted in the Great Recession and the shallow economic recovery, there is a tremendous distrust of the political establishment, which fuelled both campaigns. The government shutdown also stoked a popular rage that allowed the socialist campaigns to strike a real chord with working people. During the government shutdown, the approval rating for Congress slumped to a historic low of 5%. In a Gallup poll, a record-high 60% said that a new party was needed in the US, and a record low of only 26% said the two parties were doing an adequate job.

Many people in the US often feel discouraged and demoralised by the rigged pro-corporate electoral system. However, these campaigns demonstrated, beyond a shadow of doubt, that independent candidates and working-class people can challenge the Establishment without taking a dime of corporate money! Ty Moore raised more money than his main corporate-backed opponent, and Kshama Sawant raised approximately $110,000, compared to her opponent’s $238,196.

Socialist Alternative’s campaigns showed clearly that it is possible for ordinary people and young people to organize together and fight to change the world. Socialist Alternative wants to build on this momentum for future campaigns of the 99%, like the “Fight for a $15/hour minimum wage and a union”, and the struggle to tax the super-rich to pay for a green jobs programme and mass transit.

As cuts to popular government programmes, like Social Security, are likely coming, possibly in the next few months, both corporate parties will probably see their support further undermined. Going into the 2014 mid-term elections, these socialist campaigns have shown the huge opening for independent working-class politics. Coalitions of fighting union leaders, socialists, Greens and civil rights groups should be built in every city across the country to organize movements and mount independent candidates.

These election results, along with the ‘Arab Spring’, the Wisconsin labour uprising, and the Occupy movement, have made possible what seemed impossible. They are ushering in a whole new process in society. Not only are these electoral campaigns leading to the growth of a new vibrant socialist movement in the United States, but they will also serve as a model that will contribute to the eventual inevitable rise of a new party that will fight the richest 1% – a mass party of working people.

Socialist ideas on the rise 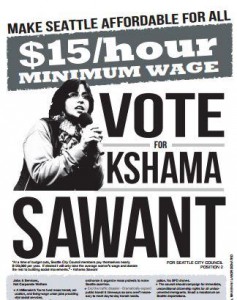 Many people on the left argue that socialist ideas cannot gain mass support in this country; these campaigns show that they are dead wrong. Pew Research Center Polls show over and over that a majority of young people and people of color now prefer “socialism” to “capitalism.” Obviously, this consciousness is confused, but it illustrates that people are fed up with growing inequality, the unbearable rises in the cost of living, and capitalism itself.

Sawant and Moore’s opponents barely bothered to resort to “red-baiting” against socialist ideas. Instead, incumbent Richard Conlin, in Seattle, used thinly-veiled anti-immigrant and sexist arguments against Sawant, while Alondra Cano, in Minneapolis, shied away from negative campaigning, preferring to rely on her support in the real estate industry and the political establishment.

Socialist ideas are clearly back on the agenda, and Socialist Alternative is uniquely positioned to help build a new socialist movement. This needs to be done by socialists being the most effective fighters for the needs of working-class people, such as a $15 an hour minimum wage and a tax on the super-rich to fund jobs and services. Socialist Alternative has stood out on the left for our ability to connect with politicized workers with understandable language. At the same time, we honestly explain that reforms in our society can only be fully sustained if power is taken out of the hands of big business and a new socialist system based on democratic public ownership of the top 500 corporations is established.

Ty Moore’s campaign in Ward 9 of Minneapolis was built alongside important high-profile housing justice campaigns led by Occupy Homes Minnesota. Moore and Socialist Alternative helped co-found this organization, which successfully defended many homeowners from being evicted by big banks and the police. The center of Occupy Homes’s “Foreclosure and Eviction-Free Zone” was in Ward 9, a diverse, working-class community, and both Occupy Homes and the Moore campaign mutually reinforced each other.

Likewise, in Seattle, Sawant’s campaign helped put the “Fight for 15” – strikes and protests of low-wage workers for a $15/hour minimum wage – at the centre of political debate. Socialist Alternative energetically built this movement, aiding victimised striking workers and countering arguments against raising the minimum wage. When labour organisations placed an initiative on the ballot to raise the minimum wage to $15 in the suburb of SeaTac, the Kshama Sawant campaign energetically supported this movement, contributing to the ballot initiative’s historic success.

Eventually, both mayoral candidates, who had not mentioned the minimum wage at the beginning of their campaigns, came out vaguely in support of a $15/hour minimum wage. Sawant’s success at shifting the political debate prompted the Seattle Times, the largest newspaper in Seattle, to say before the election that “the winner of Seattle’s election is already the socialist Kshama Sawant.”

These independent working-class electoral campaigns have important lessons for the labor movement, which is facing a serious crisis. The labor movement is under attack from big business, and the Tea Party Republicans are trying to destroy union rights altogether. However, Democratic politicians are often the ones proposing cuts, privatization and other attacks on unions, too. In this situation, the labor movement needs to regain its fighting traditions and run more of its own independent working-class candidates.

Instead, labor leaders often back Democrats either out of fear of Republicans, habit, or the fact that many labor leaders live lives of luxury that have more in common with politicians than their own members. However, the Moore and Sawant campaigns demonstrate that workers are increasingly fed up with politics as usual, and labor support can be gained by credible independent campaigns with concrete demands. Moore obtained the active support of the SEIU State Council in Minnesota which played an instrumental role in the campaign. Meanwhile, Sawant won endorsements from six union locals, and a majority of the King County Labor Council voted in favour of endorsing Sawant (narrowly missing the super-majority necessary for an endorsement).

In the coming months and years, union members will face continual attacks on their rights and living conditions. In the course of these fights, we will need to use protests, pickets, strikes and direct action to defend ourselves. Workers will have to struggle to win democratic control of their unions and elect leaders who are actually willing to resist the corporate onslaught. These battles will show the need for workers to have their own independent political representation. The Moore and Sawant campaigns show that unions can run very successful independent candidates, which should be a step towards forming a new party of the 99%. 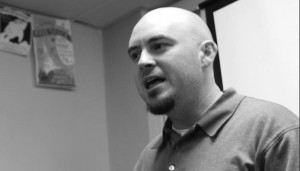 Many people who supported Moore and Sawant are breaking from the Democratic Party, but are not ready yet to fully make the break. Socialist Alternative will continue to argue within social justice movements and coalitions that the Democrats are fundamentally a party of big business, and that working-class people should not give any support to them, even candidates on their “left wing.”

We urgently need a party of working people, connected to social movements, fighting unions, community organizations, Greens and socialists. As a concrete step to get there, we should form coalitions throughout the country with the potential to come together on a national level to run 100 independent working-class candidates in the 2014 mid-term elections. The unions who supported the Moore and Sawant campaigns and many others should run full slates of independent working-class candidates in the mid-term, state, and local elections.

United States capitalism is in a deep economic and social crisis. The political establishment is discredited, and their system of government appears broken. Deep anger is growing against inequality, racism, sexism and homophobia. Environmental destruction is worsening. The situation is crying out for an alternative.

If socialists, Greens and union leaders do not capitalise on this opening, then the right wing will. For instance, a Libertarian candidate for Virginia governor won over 145,000 votes in this election. Even worse, reports show that openly racist, far-right groups are growing.

This is an urgent situation. We need to actively build the socialist movement along with broader coalitions of the 99% to challenge the agenda of big business. The incredible election results of Ty Moore and Kshama Sawant are shining examples of the way forward.