Paula Mitchell (edited version of an article in this week’s Socialist,paper of the Socialist Party – CWI England & Wales)

The plight of Kurds and others living in Kobane, in the Kurdish area of Syria, surrounded and besieged by the Islamic State (IS), fills everyone who sees IS’s brutal methods, including mass executions, beheadings, torture and rape, with horror. Over 150,000 refugees have fled Kobane. The resistance put up by Kurdish fighting forces in Syria, a third of who are women, is extremely courageous.

Kurds are a stateless nation, divided, since the 1921 post-war agreement between imperialist powers to carve up the Middle East, across Iraq, Iran, Syria and Turkey. As instability swept the Middle East as a result of Western imperialism’s wars, Kurds have been able to develop autonomous areas in both Iraq and Syria. 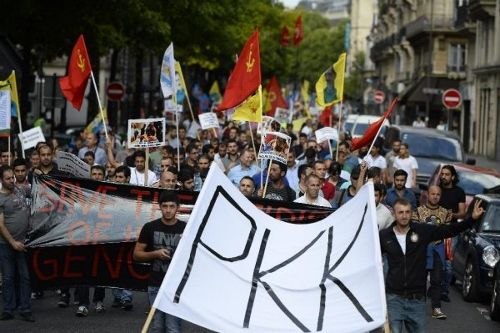 The three Kurdish enclaves in northern Syria are known as Rojava (West Kurdistan). In a region dominated by repressive regimes including suppression of women, Rojava is something of a beacon to Kurds, with its reported attempts to involve people of all faiths and nationalities in secular cantons. Its standing has grown further in comparison with the corrupt capitalist regime of Barzani in the Kurdish area of northern Iraq.

The dominant organisation in Rojava is the PYD (Democratic Union Party), linked to the Kurdistan Workers Party (PKK), a guerrilla organisation with mass support based in the Kurdish areas of Turkey. It was the PKK that entered Iraqi Kurdish areas when the Yazidi (Christian) community were under attack and played a large part in repelling IS from Sinjar.

The population of Kobane faces the possibility of a massacre. Many Kurdish organisations have, in desperation, called for action by Western powers, in particular for heavy armoury to back up the bombings. 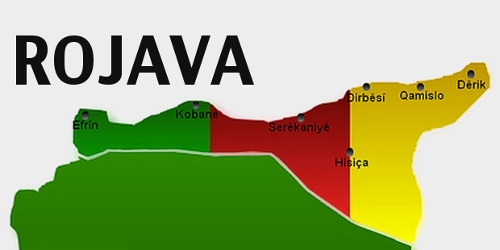 But any involvement of the US, UK and other Western capitalist powers will only ever be in pursuit of their own interests. Western imperialism has a long record of standing by while populations are slaughtered – including Kurds themselves – and intervening to inflict their own carnage when it has served their interests.

Western powers want the involvement of Turkey, and the Turkish government has now agreed to join the campaign against IS. However it does this for its own reasons. It is suspected of having colluded with IS against the Kurds in Syria. It has allowed jihadists to cross its border in big numbers. The Turkish government now fears it has created a monster – or in fact two: IS itself, which now threatens Turkish borders, but also an armed and roused Kurdish population.

A ’peace process’ is meant to be in place between the PKK and Turkish state but depending on how events develop, it could be sweept aside. Appallingly, the Turkish state has mobilised troops and used teargas against Kurds and Turks gathering on the border and wanting to get through to join the resistance.The Turkish regime’s aims in Syria include setting up a buffer zone in Rojava and replacing Kurdish fighters with their own forces. Following Turkish President Recep Tayyip Erdogan’s statement that Kobani was “about to fall”, street clashes took place between protesting Kurds and police across Turkey on 7 October, with at least nine people killed and dozens wounded. Kurds and right wing Turkish nationalists also clashed in Istanbul.

The  Socialist Party (CWI England & Wales)  offered its support to a statement by Turkish and Kurdish community organisation, Day-Mer, which stands clearly against Western imperialist intervention and correctly says:

“The crocodile tears of Western imperialist countries, led by the USA, in an attempt to appear to be bombing IS, should not deceive anybody. The blood bath in the region is their creation. For this reason, the way forward to get rid of IS barbarism is not a new imperialist intervention that provokes conflicts between different beliefs and peoples to plunder the region’s natural resources; on the contrary, it is only possible through termination of these countries’ interventions in the region and the realisation of regional people’s right to self-determination of their future.”

The Socialist Party supports the right to armed resistance by people under attack and facing the possibility of slaughter. This should be under the control of democratically-elected, non-sectarian defence committees, which would enable the mass of ordinary people to take an active role, including in deciding the course of action. We support the right of Kurdish people to self-determination.

Both Islamic State and imperialism can be repelled in the Middle East but because of the ethnic and national divides in the region this would have to take the form of a non-sectarian workers’ defence force with democratic controls. It would require an appeal to workers and poor people across the region, including in Turkey, across Iraq and Syria and beyond, with a programme to defend the democratic rights and national aspirations of all peoples. It would mean campaigning for the vast wealth of the region to be owned and controlled democratically in order to provide a secure standard of living for all working and poor people. A voluntary socialist confederation of the Middle East would enable all peoples to freely and democratically decide their own fates. 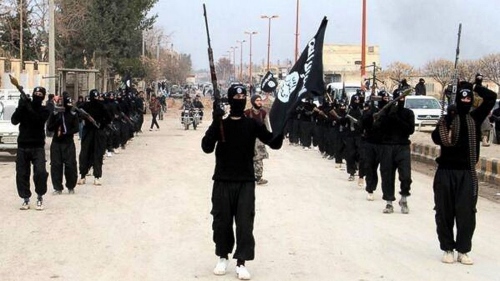