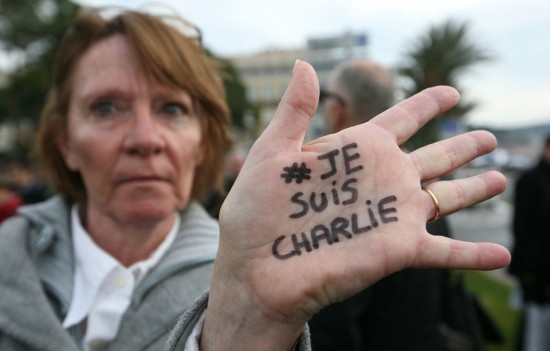 Unity against racism and capitalism!

Nearly four million people marched in the streets of France on the weekend of 10-11 January to express their disgust and their grief against the attacks in Paris which killed seventeen people last week. This is an unprecedented mobilisation on this kind of issue. It is clear that a large majority wanted to be united in the face of the violence of terrorism, to reaffirm the right to freedom of speech and expression, but equally, to a large extent, their rejection of racism and division.

The manoeuvres of the right and the extreme right to benefit from the emotion and the anger have failed. The racist Front National (FN) was unable to muster more than a thousand demonstrators in Beaucaire dans le Gard. What was most impressive in the huge demonstrations of the weekend was the refusal to fall into the trap set by the terrorists and racists.

When we hear talk of “national unity”, there is always a danger. On the one hand government figures use it to cut across the opposition of workers and the population to their policies; on the other hand, journalists and politicians outbid each other with nationalism as if the country was going to war. This was the complete opposite of the feeling that dominated the marches in all the cities, often calm and silent but above all fraternal.

Some preferred, in view of the world leaders who were participating, to boycott the Paris demonstration. The presence of the king of Saudi Arabia, where the crime of expressing an opinion is punishable by flogging or the Israeli Prime Minister Netanyahu, whose army has caused the deaths of thousands of Palestinians, or the Turkish Prime Minister, Erdogan, who is a leading supporter of ISIS in Syria, and many others who are the worst war-mongers and gravediggers of freedom in their own countries, repelled a large part of the demonstrators. This is understandable, but for our part we did not want to give up the street to the gestures of Prime Minister Manuel Valls and we preferred to be with the millions who were expressing their rejection of hatred and terrorism. We participated in the marches wherever we were, distributing our special supplement and not encountering any hostility, on the contrary.

Unity against racism and capitalism!

A significant proportion of the population in France chose this unity but certainly without many illusions in those who were at the head of it. It is certain that a large majority continues to have as main worry for 2015 the risk of unemployment as indicated in the polls on 3 January.

We have to fight against racism in all its forms from anti-Semitism to Islamophobia. And some politicians are stirring up hatred particularly against Muslims. According to a poll taken on Saturday, 10 January, 66% reject the amalgam between “Muslims who live peacefully in France” and Islamists.

After the dramatic events of 7 and 9 January, the mass mobilization of this weekend, its massive and fraternal nature, things mustn’t be allowed to fall back. Meanwhile, Valls along with politicians of the UMP and the FN will continue to raise the specter of terrorism to hide their inability to solve social and economic problems of the majority of the population and continue to justify wars in Africa and the Middle East are yet precisely the cause of the emergence of these terrorist groups which produced these three madmen who murdered 17 innocent people.

Workers, young people must be united to fight against racism, whatever their origin. For this, we cannot count on Valls, Holland and Sarkozy! We must organize together to attack the root of the problem, the capitalist system, exploitation and impoverishment of the majority for the benefit of a small minority on which the system rests.