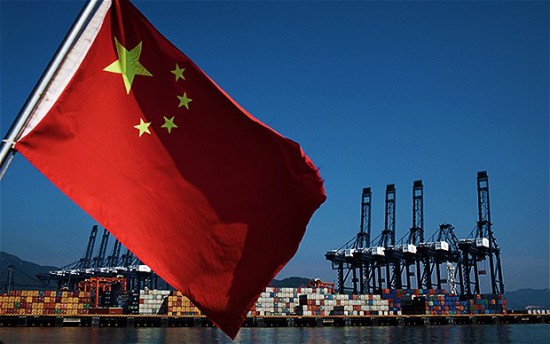 The release this week of official 2014 GDP data confirmed expectations that China’s economy recorded its slowest pace in 24 years. Most economic forecasters point to even slower growth in the coming years as China grapples with deflation, overcapacity, a surge in debt levels, and the increasing “zombification” of overinvested economic sectors including the housing market which has been the economy’s main engine of growth for the past decade.

The Chinese regime is expected to take further measures in coming months to loosen monetary policy in order to stimulate the economy and counter deflationary pressures (in common with the central banks in Europe and Japan) by easing the flow of credit to struggling local governments and companies. But this will require an extraordinarily difficult balancing act if the government is not to trigger a new upsurge in already unsustainable debt levels.

Last year’s full-year GDP growth was 7.4 percent, the National Bureau of Statistics (NBS) announced on Tuesday, undershooting the government’s 7.5 percent target. This was the first time since 1998, in the midst of the Asian financial crisis, that Beijing missed its growth target.

The figures mean that the former ‘miracle economy’ has slowed by 30 percent in the past five years, from an expansion rate of 10.4 percent in 2010, the last time it achieved double-digit growth, to 9.3 percent in 2011, and 7.7 percent in 2012 and 2013. The latest figures signal “the end of a high-growth heyday,” concluded The Wall Street Journal. China’s state news agency Xinhua concurred with this view. “The country’s period of miraculous breakneck growth is over – but let’s get over it,” it said.

China’s headline GDP growth figure still ranks as one of the fastest in the world. But nobody who grasps the real condition of the Chinese economy will find reassurance in this fact. The Chinese government has long been accused of manipulating GDP statistics and even Premier Li Keqiang some years ago famously described the country’s GDP data as “man made”. Other indices suggest the economy may have suffered a more abrupt slowdown than suggested by the official figures. China’s total power generation – widely seen as a more accurate gauge of economic growth – increased by just 3.2 percent in 2014 according to the NBS. This was the slowest expansion in 16 years. While final statistics are not yet published, it seems highly probable that China’s steel consumption fell last year for the first time since 1995. Steel is another important indicator of wider economic performance.

The government’s message is that the economic slowdown is good news and a deliberate policy. In the media the formulation “new normal” is repeated over and over. In fact, at its news conference to announce the GDP figures the NBS used this term eight times! But as Jamil Anderlini pointed out in the Financial Times, “In China’s authoritarian political system, the ‘leadership of the Communist party’ is always ‘entirely correct’ and so bad news, such as the slowest growth in nearly a quarter of a century, is either the fault of ‘external forces’ or actually good news.”

Capitalist economists are now taking an increasingly dark view of the Chinese economy, with the latest GDP figures seen as heralding an extended slowdown with serious implications for the crisis-stricken global economy.

“We should expect growth numbers starting with a 6 to come through in 2015 – we expect 6.8 percent growth in 2015, slowing to 6.5 percent in 2016,” Fitch Ratings said in a research note. The International Monetary Fund, normally considered “bullish” on China, has also lowered its forecast for Chinese growth to 6.8 percent this year, and 6.3 percent in 2016. “The housing slowdown is more serious than we thought earlier,” confessed IMF chief economist Olivier Blanchard. The Fund predicts India will experience faster GDP growth than China in 2016.

Like many other parts of the world economy, China is now grappling with deflation (falling prices). In China’s case this is mainly the result of unprecedented levels of overcapacity. “The ratio of output to capacity in many sectors – for example, steel, plate glass, construction materials, chemicals and fertilisers, aluminium, shipbuilding, and solar panel and wind turbine manufacturing – has fallen sharply. Last year it was about 70-72 per cent, and it is likely to have dropped further since,” noted the Financial Times (24 December 2014).

The frenetic pace of construction especially following the monster stimulus injection of 2008 has resulted in a multitude of ‘ghost towns’ and a huge debt overhang. China’s consumer inflation rate has fallen to 1.5 percent, from 6 percent five years ago. But producer prices have been in negative territory for 34 consecutive months, falling by 10 per cent since 2011. Deflation, which makes debt repayments more expensive in real terms, is now seen as the biggest danger facing the global capitalist economy. This is shown by the ECB’s formal announcement on January 22 of a substantial ‘quantitative easing’ programme. Copying the US central bank’s previous policy, the European Central Bank will electronically print around 60 billion euros a month over the coming two years. The aim of this policy is to shake the economy out of deflation, which currently afflicts nine of nineteen Eurozone members.

Beijing’s interest rate cut last November followed a similar logic. But it proved to be counterproductive, having little effect on loosening credit conditions for struggling companies, but instead triggering a stock market bubble with share prices surging by 36 percent in the eight weeks following the rate reduction. The housing market was heavily driven by speculation in the past, with one percent of the population said to own more than one-third of China’s urban housing. Now, with the real estate sector in the doldrums, some of this speculative capital has poured into the stock market.

The government is attempting to “defuse debt risks” as Premier Li promised last year’s session of the National People’s Congress. Initially, it has attempted to rein in the riskiest forms of shadow banking, concentrating on the rapidly growing trust sector. But despite new government curbs in 2014, assets in the shadow banking sector as a whole grew a further 14 percent to US$9 trillion [source: Nomura Securities]. The growth of shadow banking, a phenomenon previously associated mostly with ultra-deregulated Anglo-Saxon capitalism, is heavily linked with the most speculative branches of the Chinese economy such as real estate, which are now suffering from overcapacity and heightened default risks.

According to J.P. Morgan, local government debt almost quadrupled to 21 trillion yuan (US$3.4 trillion) in 2014, from 5.6 trillion yuan in 2008. Local governments have engaged in colossal debt-driven construction programmes in cohorts with developers and private investors with the aim of outstripping neighbouring regions and achieving impressive GDP figures. This construction binge has also fuelled the corruption epidemic that ‘paramount leader’ Xi Jinping has publicly admitted could bring about the collapse of the CCP (Chinese Communist Party) dictatorship. Last year’s slowdown in the housing market, with a ten percent decline in new housing starts, has increased the pressures on local governments who report a 10 percent decline in land sales over the full year 2014. Land sales are the most important source of local government revenues.

Beijing’s dilemma is that further stimulus measures risk inflating a new credit bubble, increasing the odds of a financial crisis in the future, while cutting the flow of credit could trigger a sharper slowdown and even outright recession, thus reducing the ability of companies and local governments to repay their debts.

According to Anne Stevenson-Yang, a bourgeois economist who has long warned about the potential for a banking crisis in China, “China is sinking into a deflationary recession that’s increasing in speed and may take some time to run its course. Investors have lost faith in the property market, which alone comprises about 20 percent of GDP, when taking into account the entire supply chain, from iron ore production to construction to related financial services and appliance sales… There’s even an outside possibility that China’s economic miracle could end up in a fiery crash landing, if a surge in banking system loan defaults outruns government regulators’ attempts to contain such a credit crisis and restore financial confidence.”

The government has so far proceeded with extreme caution in attempting to defuse the debt time bomb. Last year saw a number of ‘near misses’ with corporate defaults narrowly averted out of fear these could trigger a wider crisis throughout the financial system. Beijing is expected to announce a deposit insurance scheme for the banks in coming months, similar to other countries, which it hopes will provide a ‘firewall’ against wider financial panics in the event of individual bankruptcies and defaults. At the same time it has ordered local governments to ‘reclassify’ their debt obligations in order to remove the implicit government guarantee that today applies to all government-linked companies, investment vehicles, and applies de facto to the shadow finance instruments linked to them. Once these steps are completed, it is widely believed that Beijing will allow defaults to take place on a selective basis as a means to instil ‘discipline’ on credit markets and to protect the core banking system from the excesses of its shadow-banking arm. The government clearly anticipates some ‘localised’ banking crises but hopes to contain these and prevent them from spreading. This, however, entails enormous risks and developments could slip beyond the control of the government and its regulatory agencies.

The Chinese economy is therefore entering unchartered territory in 2015. The Chinese dictatorship’s mix of neo-liberal capitalist reforms (“let the market play a decisive role”) together with increased state repression and political control are leading society deeper into economic crisis and political turmoil. The working class must forge its own alternative to this bankrupt regime, based on democratic self-organisation and international socialism.