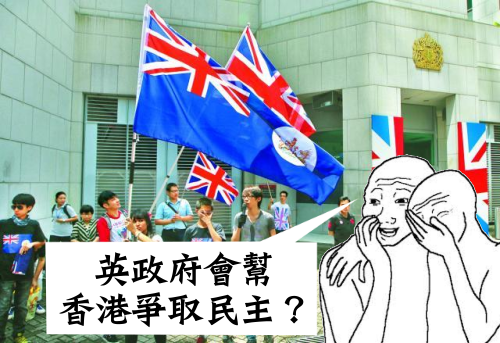 After last autumn’s ‘youthquake’ in the shape of the Umbrella Revolution there are few people on the planet who do not know that Hong Kong’s so-called ‘democracy’ is a fiction. It is noticeable that Hong Kong’s former colonial rulers, the British government, belong to this stubborn minority.

In a recent statement to a parliamentary committee in London, the British Foreign Office claimed that the Iran-style electoral system proposed for 2017, which is limited to three regime-vetted candidates, offers Hong Kong voters a “genuine choice”. This might well be the biggest lie heard in the British parliament since a certain Mr. Blair told us there were weapons of mass destruction in Iraq. Foreign minister Hugo Swire conceded that “proper democracy” was not on the table in Hong Kong but despite this he had urged Hong Kong’s pan democratic legislators not to vote down the proposals. “Something is better than nothing,” Swire told the committee. Even a fellow politician from Swire’s ruling Conservative Party, John Baron, said the Foreign Office position seemed to be “intentionally ambiguous”.

The comments of Swire and the British government will delight Hong Kong’s pro-government camp, which will recognise these as a mere parroting of its own arguments. These statements, and an imminent report from the British government that endorses the much-criticised Hong Kong Police Force over its handling of the 79-day long protest movement, will disappoint and anger many democracy activists in Hong Kong. This is especially true of those ‘nativist’ diehards who cling to the illusion that the British ruling establishment can be an ally in the democracy struggle. Some nativist-inspired youth even staged an occupation outside the British Consulate in December, during the final stages of the Hong Kong Umbrella Movement, urging the British government to take a stronger line. The Foreign Office has given its answer.

Britain seized Hong Kong from China in 1842 after the first Opium War, which was waged over the “freedom” of British traders to make drug addicts out of the Chinese population. Even as recently as the 1930s the British navy, along with other foreign powers, sailed gunboats along the Yangtze river. Today’s turnaround in fortunes, with China’s economic power dwarfing Britain’s, was highlighted when a delegation of British parliamentarians was refused entry to Hong Kong on December 1. The group was planning to monitor the implementation of Britain’s 1984 agreement with China for the 1997 handover of Hong Kong. This incident passed without a diplomatic protest from Britain’s side or so much as an angry letter to the Chinese ambassador in London. Nonetheless the Foreign Office has rejected accusations it has bent the knee to Beijing. “I would refute the suggestion that we have in any way kowtowed to the Chinese government,” Swire told the British parliament.

Recently, Ming Pao newspaper mentioned a government internal document revealing that Britain wanted to bring a business team for the signing of the Joint Declaration with China in 1984, to rustle up deals covering nuclear power technology and weapons export to China. The plan was dropped following opposition by the then governor of Hong Kong who warned it was “too obvious”.

David Cameron’s government has made little attempt to hide its increasing desperation for trade and investment deals with China. Britain’s investment (FDI) in China rose by 28 percent in 2014, while investment from the European Union as a whole fell by 5.3 percent. In fact, British investment in China is set to quadruple over the next five years according to The Telegraph (19 January). On the converse side, Chinese companies now own stakes in North Sea oil, Heathrow and Manchester airports, cereal manufacturer Weetabix and Pizza Express. Britain signed US$30 billion worth of deals with the Chinese government last June, which include Chinese investments in banking, railways and nuclear power. “I think I can sum up the foreign policy of the British government in three words: more China trade,” declared Democratic Party veteran Martin Lee Chu-ming.

The British government’s timid response to December’s humiliating entry ban (there is no visa requirement for British nationals to visit Hong Kong) and its subsequent support for Beijing’s anti-democratic election plan, demonstrate clearly which side its has taken in relation to the Umbrella Movement. Nor is it surprising that its upcoming report on the mass protests endorses the stance of Leung Chun-ying’s government and finds the police “response has been proportionate” [Half-yearly report from British Foreign Office on Hong Kong, January 2015]. It was Britain after all that sold the tear gas to the Hong Kong police! But these diplomatic contortions also answer the lies from China’s state-run media that the Umbrella Revolution and demands for democracy are part of a “colour revolution” incited by Western powers.

A key factor behind the Cameron government’s latest round of kowtowing (denials aside) to the Chinese dictatorship is the planned visit by President Xi Jinping to London later this year. The last time China’s top leader made such a visit was 2005, by Hu Jintao. At that time, China was the fifth largest economy in the world and Britain was fourth. Now China is the second largest economy (some including the IMF put it in first place) and Britain is sixth. With Beijing promising to liberalise its financial system and further internationalise the use of its currency, the yuan, the British capitalists are desperate to make London the major offshore centre for China-related financial deals. For capitalism this stuff is important – much more important than airy-fairy talk about ‘democracy’.

Xi’s pending state visit is clearly a reward to the Cameron government for its self-censorship and competence in the bootlicking department. “I think Xi’s reasons for visiting Britain may be partly due to the fact that Beijing was not too displeased by the British reaction to the Hong Kong Occupy Central [sic] issue,” exclaimed Chen Zhimin, a mainland commentator on international relations. In May 2012 Cameron met the exiled Tibetan religious leader Dalai Lama in London, which brought forth an 18-month diplomatic freeze by Beijing. Since then the British government, with its eyes on business contracts, has studiously avoided antagonising the Chinese regime.

Socialist Action has consistently argued against Beijing’s “colour revolution” propaganda, showing that this is a largely theatrical diversion to hide the dictatorship’s close economic and political ties with foreign capitalist governments. Likewise, we have warned that it would be disastrous for the democracy movement in Hong Kong and in China to believe in any support or shared interests with Western capitalism and right-wing anti-working class governments of the Cameron type. To succeed, the struggle against authoritarian rule needs to be international, against the lying and deceitful capitalist elites and instead linking up with grassroots workers and youth across China and around the world.