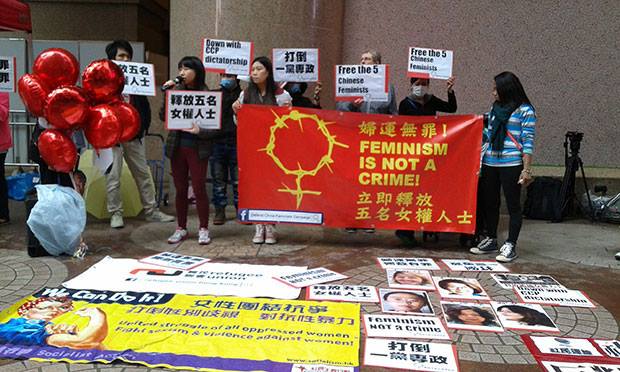 “Feminism is not a crime” rang out across Hong Kong’s Times Square, along with chants of “free the five” as several campaign groups came together to protest in support of the Chinese feminists arrested one month ago.

The Hong Kong manifestation on Saturday 11 April, organised by Defend China Feminists Campaign, was one of many protest actions lined up for the weekend. Groups from the US to Australia have taken up the case of the five women activists whose “guerrilla art” style of raising awareness has drawn a fierce response from the Chinese dictatorship. The global character of this campaign was evident in the Hong Kong protest, with women participants from half a dozen different nationalities.

The five – Wu Rongrong, Zheng Churan, Li Tingting, Wang Man and Wei Tingting – have been held for over a month amid reports that at least two of the women have suffered worsening health problems in detention (Wu Rongrong suffers from Hepatitis B while Wang Man has a heart condition). The case has thrown a spotlight on the vindictive treatment that is widespread in China when security officials try to extract confessions from dissidents and social activists. Zheng Churan, who has poor eyesight, has reportedly had her glasses confiscated. Court cases in China rely heavily on confessions and therefore an attempt to break down the women’s resolve is what is taking place.

After one month’s detention, the police have made a tactical switch with the charges changed from “picking quarrels and provoking trouble” to “gathering a crowd to disturb order in a public place”. Both charges can carry up to five years imprisonment. Xi Jinping, who wants to demonstrate he is China’s ‘strong man’, has presided over the most intense crackdown for two decades with around 1,000 regime critics rounded up last year. Media controls and policing of the internet have been massively stepped up. In several high profile cases, dissidents have been given long jail terms under the same “public disorder” charge. This was the case with New Citizens’ Movement founder Xu Zhiyong who last year was jailed for four years.

Reports from the women’s lawyers suggest they have been heavily interrogated with the focus shifting from the original ‘offence’ – their plans to hand out flyers against sexual harassment on International Women’s Day (8 March) – to investigate earlier activities. Liang Xiaojun, a lawyer helping with the women’s case, said that Wu Rongrong had been questioned intensively about the 2012 “Occupy Men’s Toilets” campaign, an activity designed to showpiece the unfair allocation of facilities in shopping malls and other public places. Some of the other women were interrogated about the “Bloodstained Bride” campaign against domestic violence, which took place in 2013 and 2014.

It is clear from the direction the case is taking that the security apparatus wants to make an example of the five women, to show zero tolerance towards any form of public awareness campaign or protests. In Chinese, this is called “killing the chicken to scare the monkey” – high-profile and severe punishment to deter other groups from taking part in struggle. Especially with the economy now hitting the lower range of government ‘safety limits’ and the risk of a much deeper slowdown, the dictatorship fears movements among the millions of sweatshop workers and even a potential Hong Kong-style Umbrella Movement breaking out in mainland China. Therefore even activists like the five feminists who are considered to be ‘moderate’ and do not call for an end to one-party rule are suffering the heavy hand of state repression. The women have also been singled out because their message – against sexual violence and harassment – poses a challenge to the increasingly conservative Confucian ideology that Xi Jinping stands for, as shown in his Chinese New Year speech, which focussed on “family values, family education and family traditions”.

The likelihood therefore is that the struggle for the women’s release will need stamina and determination – to keep going and step up the pressure on the Chinese regime. This weekend’s protests should be a springboard to more action.

In Hong Kong’s Times Square the protesters drew attention to the crackdown in China, which is now in the global spotlight because of these arrests. Vanessa from the Philippines, representing the Refugee Union in Hong Kong, spoke about the global problem of violence against women. Women and children make up 80 percent of the world’s refugees.

Leung Kwok-hung, better known as ‘Long Hair’, the chairperson of the League of Social Democrats demanded the release of the five and called for more campaigning for free speech and against repression in China. Sally Tang Mei-ching of Socialist Action (CWI) said the Chinese dictatorship was trying to outlaw feminist struggle and pointed out that the wage gap is widening between men and women in China as a result of the dictatorship’s capitalist market reforms.