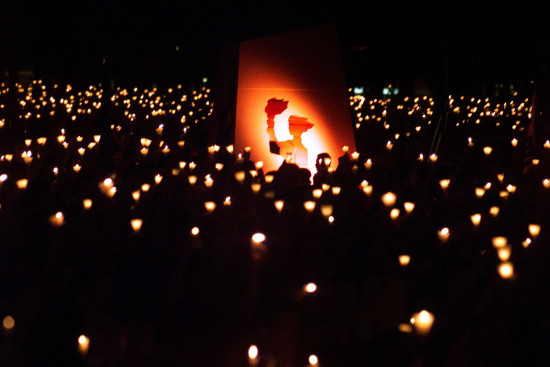 End the monopoly of the ‘moderate’ pan-democrats! Transform June 4 into a platform to mobilise for mass struggle

Hong Kong has been the only city in the whole of China that allows mass demonstrations against the one-party dictatorship since the massacre of June 4, 1989. The June 4 candlelight vigils have in the past few years seen nearly 200,000 people attending, a record high since 1990. The number of mainland Chinese visitors taking part has also increased year by year. The turnout each year can be seen as a reflection of public anger towards the government. The former Secretary of Justice and prominent pro-Beijing politician Elsie Leung Oi-sie recently warned that those demanding the “vindication” of the 1989 protesters and an end to one-party rule may face prosecution once Article 23, the security bill, is passed. The CCP has always seen the annual June 4 manifestation as a thorn in its side.

The Hong Kong Alliance in Support of Patriotic Democratic Movements in China (‘The Alliance’ is the main organiser of the June 4 vigil) has been under heavy criticisms over the last few years for turning the commemoration into a mere ritual which doesn’t fight for anything and has no connection to the democracy struggle today. The ‘moderate’ pan-democrats treat the June 4 event as their own political instrument, turning this into a display of emotion and tears without providing any real answers and perspectives on how to end the CCP dictatorship. Due to the lack of organised combative alternatives the masses have felt increasingly powerless as to overthrowing the CCP dictatorship. This has led some to turn towards the illusion of “separating the democratic movements in Hong Kong and China, that Hong Kong can survive on its own.”

In face of such challenges the Alliance this year published a ‘June 4 pamphlet’ to respond to the criticisms, but their arguments are either incredibly weak or wrong. The Alliance justifies the call for “building a democratic China” on the grounds of “patriotic sentiments towards the Chinese nationality”. Yet the idea of a “Chinese nationality” has always been a political tool used by the CCP dictatorship to rule, stressing the need for stability in the name of nationalism. Since Xi Jinping came into power in 2012, he has increasingly attempted to become a ‘strongman’ on the international arena and internally has increased the regime’s efforts to “maintain stability” i.e. repression. With its Chinese nationalist outlook, the Alliance does not support the right of self-determination for the ethnic minorities in China, not even paying lip service to the rights of the Tibetans and Uighurs who suffer heavy oppression.

Since the British colonial period, the bourgeois pan-democrats have always believed that Hong Kong will inherit the British “rule of law and liberal democracy” and that the city can slowly reform towards democracy. In its pamphlet, the Alliance claims, “we can still play an important role… that is to fight for the establishment of liberal and constitutional democracy in Hong Kong, and using its successful experience as an example to mainland China.” The Alliance shares the same viewpoints with the liberals in China, denying the need to overthrow the CCP dictatorship and instead hoping for gradual reform.

Moreover, the Alliance has long been controlled by ‘moderate’ pan-democratic politicians, lacking basic internal democracy. A scandal from two years ago revealed that many ‘organisations’ within the Alliance only exist in name – in order to allow the conservative leadership to continue its control. These ‘organisations’ sound as if they come from different backgrounds, yet in reality they are all controlled by the ‘moderate’ pan-democrats, while on the other hand other more radical groups are barred from joining the Alliance.

Socialist Action stands for replacing the ‘moderate’ pan-democrats at the head of the democracy struggle by more radical and revolutionary forces. However, the nativists’ idea that it is “none of our business to build a democratic China” represents a step backwards even from the pan-democrats’ position. This is not a moral question but a question of political reality. Under the one-party dictatorship there is no way that the CCP will allow more autonomy for Hong Kong. Whether one is fighting for an independent Hong Kong or a democratic China, one must overthrow the entire CCP regime, and to such end those who want change in Hong Kong must link up with mass struggles in mainland China. Struggles for democratic rights and against repression have much greater chances of success if they are spread as widely as possible, not isolated to one city or country where it is easier for those in power to suppress them. The need for grassroots solidarity across borders is shown by many recent struggles including the Hong Kong dockworkers’ strike in 2013 and the release of five Chinese feminists earlier this year.

The June 4 vigil should be transformed into an open platform to mobilise for mass struggle, allowing different groups and organisations to speak and put forward proposals – ending the monopoly of the ‘moderate’ pan-democrats. Finally, only with a programme to overthrow the CCP dictatorship and capitalism can the real fighting legacy of the 1989 movement be continued until victory.