On 23 September, during the visit of president Xi Jinping, Seattle council member Kshama Sawant of Socialist Alternative (CWI), led a protest action to draw attention to abuses of workers’ rights in China, including by US multinationals. We publish here the open letter submitted by Kshama Sawant and several other Seattle social activists.

We note that during your visit to the United States, starting here in Seattle, your itinerary is monopolized by discussions with representatives of big business such as Uber, Boeing, Microsoft, Starbucks, Amazon, Apple, IBM, Cisco, Dow Chemical, DuPont, GM, Pepsi and Berkshire Hathaway.

We believe the problems facing working people in both China and the US should be given attention, instead of being pushed to the side by politicians and corporate leaders, with their sole focus on maximizing profits.

We strongly protest the systematic violation by your government of democratic rights, human rights in general, and workers’ rights in particular. We are deeply concerned about the global race to the bottom, pitting workers and environmental standards in each country against each other. Throughout the US and here in the Seattle region we see a constant loss of unionized, well-paid jobs and a proliferation of low-wage jobs where poverty pay is enabled by the brutal denial of democratic rights such as the right to organize and go on strike. We urge Mayor Murray and Governor Inslee to publicly discuss these important issues with President Xi, in support of workers and the environment globally.

It is the workers of China who have been the source of its rapid economic expansion. But Chinese workers still enjoy few of the benefits, instead working long hours for low wages and with minimal safety or welfare protection. US-owned multinational corporations are among the most egregious violators of workers’ rights as shown by scandals involving Apple, Nike and New Balance. 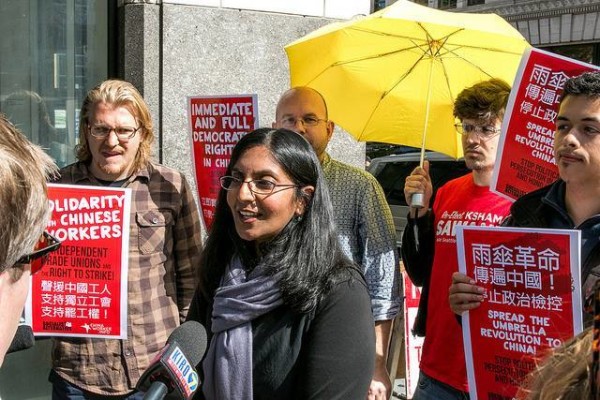 Drivers working for the Uber multinational corporation are being exploited both in Seattle and in China. Seattle’s Uber drivers are pushing the City Council to enact pro-worker legislation. Their success will be of significance to Uber drivers worldwide.

According to official figures, in 2013 only 242 million workers, out of China’s total workforce of around 770 million, had a basic pension. Last year 68,061 workers were killed in workplace accidents. This included 146 workers killed in an explosion at a supplier to General Motors. The majority of the manufacturing labor force is made up of migrants who are deeply discriminated against when it comes to healthcare, schools and housing in the cities where they live and work. These conditions have led to 1,622 strikes so far this year in China – of which 1,211 were over non-payment of wages.

Union rights are under attack around the world, including in the US. In China, workers are not allowed by law to join an independent trade union or to organize freely. The All China Federation of Trade Unions, which is controlled by the Chinese government, has a very poor record of either being silent or siding with the employers during labor disputes.

We are completely opposed to all anti-immigrant rhetoric, and condemn right wing and racist statements that seek to pit workers in one country against workers in another. We defend the rights and dignity of ALL workers, regardless of ethnicity or national origin.

We stand in solidarity with the workers of China in their struggle for democratic rights, including the right to organize in independent trade unions. Multinational corporations exploiting the present sweatshop conditions in China, enforced by your government, will be confronted with our opposition and resistance.

For these issues not to be raised during your visit, President Xi, would only add further injustice.

*for identification purposes only 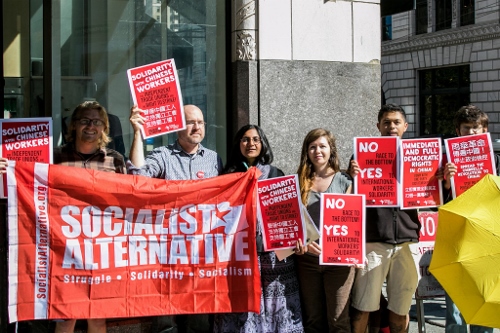