Snowden movie: US ‘deep state’ in the spotlight

“It’s not about terrorism,” says Edward Snowden in Oliver Stone’s latest movie, “Terrorism is just the excuse. It’s about social and economic control.”

The movie Snowden has already angered representatives of America’s ‘deep state’ by rubbing salt in a wound inflicted three years ago when Edward Snowden’s leaks of classified documents revealed the monstrous scale of state surveillance activities. This includes the collection of 200 million text messages every day. In the film, Snowden says he can understand why US agencies are hacking computer systems and monitoring phone calls in China and Russia, but Austria?

Former National Security Agency (NSA) deputy director Chris Inglis slammed the movie as “preposterous”. Well he would say that, wouldn’t he? Edward Snowden is currently living in Russia (he has not sought or been granted asylum there, as some reports claim). He faces a possible 30-year jail term for ‘espionage’ should he step back on American soil.

The movie doesn’t teach us anything new, but its presentation – in not-too-geeky language – of the awesome global scale and pervasiveness of modern surveillance technology is truly disturbing. If the movie succeeds in spreading this awareness to a broader public then it will have served an important purpose.

As the movie demonstrates, any mobile phone or laptop anywhere in the world can be taken over and turned into a spying device. Snowden counters this by placing mobile phones in the microwave oven and sticking a Band-Aid over his web camera (true to life, apparently). Under Bush’s presidency and the ‘war on terror’ the legal restrictions on the use of such mass surveillance methods were swept aside, with the creation of a system of secret courts. Snowden became more and more horrified by a system beyond any democratic checks or control.

The film shows graphically with computer generated imagery how the NSA has co-opted day-to-day technology like Facebook and Google to spy on anyone it chooses. This is shown in a presumably fictional scene when Snowden is shown how to hack into a teenage girl’s Facebook account and extract information, which leads her to attempt suicide. Snowden himself served as an unofficial technical advisor to the film team and has since confessed he feels “uncomfortable” because the movie is so near the mark.

In this sense it is the state, and agencies like the CIA and NSA, that are the stars of this movie – real-life super-villains. Marxists such as Fredrick Engels described the state as special bodies of armed men, with prisons etc., for the oppression of all other classes by the economically dominant class. In our time, the ‘special bodies’ have acquired mountain bunkers stacked full of cyber-technology.

This is why the CWI and its US co-thinkers Socialist Alternative call for the NSA to be disbanded and for anti-democratic legislation like the Patriot Act to be repealed. Workers and young people need to fight for full democratic control over government and state agencies to dismantle the existing undemocratic elite-controlled system.

Oliver Stone is known for making movies critical of the US establishment and especially its military policies. This includes such films as Wall Street, Born on the Fourth of July, and Salvador. Snowden is an impressive addition to this list. Stone’s project faced opposition in the US movie industry. “Every major studio passed,” he said. “It was dead. It was basically a fear, a fear of telling that story.” The director turned to Germany and France to raise funds for the film.

In the lead role, Joseph Gordon-Levitt is excellent as the slightly paranoid computer wizard – an “alpha geek” – who is more Mark Zuckerberg than Jason Bourne. The movie covers the years 2004 to 2013, from when Snowden became part of the national security apparatus (he was employed at different times by the CIA, NSA and private security contractors) until his fateful decision to flee to Hong Kong with thousands of pages of classified documents.

Zipping from Virginia to Switzerland to Hawaii the film traces Snowden’s remarkable political journey from pro-war Bush supporter to whistle-blower who grew disillusioned with Obama’s failure to change anything. The film shows embarrassing real news footage of Obama claiming to stand for “transparency” in government. In 2004, Snowden enlisted in an Army Special Forces program believing this was a way “to help free people from oppression”. Inside the security apparatus he discovers that his own government is doing precisely the opposite to its own people. Snowden has described the NSA’s activities as “an existential threat to democracy.”

Snowden’s political ideals are hard to pin down. According to Luke Harding’s book on Snowden, he sympathises with libertarian right winger Ron Paul, even donating to Ron Paul’s 2012 presidential campaign, although that predates Snowden’s decisive break with the US security establishment.

Much of the film was shot in a hotel room in Hong Kong’s Mira Hotel, the very location where Snowden handed digital documents to Glenn Greenwald (played by Zachary Quinto) and Ewan MacAskill (Tom Wilkinson) of the Guardian newspaper. Stone’s movie is built on the award-winning documentary ‘Citizenfour’ by Laura Poitras (played by Melissa Leo), which was shot entirely inside the Mira Hotel in 2013.

In Hong Kong the movie has just had its premiere and Socialist Action organised to take a group of refugees to the event, to highlight the role of eight asylum-seekers who provided safe houses for Snowden to stay in. Once the Guardian had published its first extracts from Snowden’s leaked files he was forced to sneak out of the Mira disguised as a TV cameraman and seek refuge among the city’s very poorest inhabitants – the refugees. This is also portrayed in the film.

Attending the Hong Kong premiere were Vanessa from the Philippines, a member of Socialist Action, and Ajith from Sri Lanka, two of the refugees who sheltered Snowden. Nothing has changed for Vanessa or Ajith, or their families, since their act of civil heroism in 2013. “Like Edward Snowden they are stateless,” said Edward Snowden’s lawyer in Hong Kong Jonathan Man who also attended the premiere.

Not only has Snowden spoken out publicly in support of the Hong Kong refugees, but so has Gordon-Levitt, who posted on his Facebook and Twitter accounts in support of our Hong Kong demonstration for Snowden and for refugee rights. As a footnote, Socialist Action’s banner is also shown in the closing stages of the film. This footage is from the June 2013 demonstration calling for Snowden to be granted asylum in Hong Kong, which Socialist Action co-organised. 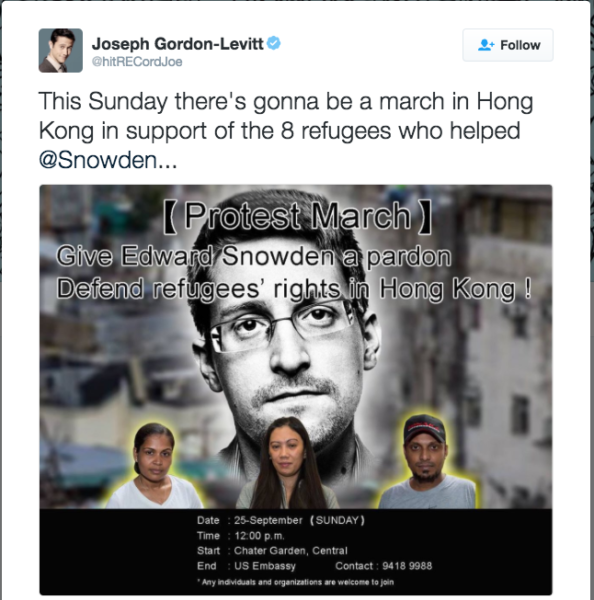 The movie’s release coincides with a campaign for a presidential pardon for Snowden when Obama vacates the White House. This is an issue the CWI has raised many times, including in the European Parliament by former MEP and current TD (Member of Irish Parliament) Paul Murphy of the Socialist Party. The movie will surely increase public awareness on this issue too. Of the current US presidential candidates only the Green Party’s Jill Stein supports a pardon.

Donald Trump has claimed his good relationship with Russia’s president Putin would help clinch a deal to get Snowden extradited and tried for espionage. Under pressure from the radical tide that drove Bernie Sander’s campaign, Hillary Clinton toned down her stance somewhat, saying Snowden must, “face the music”(?). Three years ago she claimed Snowden was a “traitor” with “blood on his hands”.

This issue also exposes the capitalist establishment’s double standards. Former presidents have pardoned some real villains such as Richard Nixon (pardoned by Gerald Ford) and Lewis ‘Scooter’ Libby (given a commutation from a 7-year jail sentence for perjury by George W Bush). Marc Rich, the billionaire illegal oil trader who founded the company Glencore, was given a pardon by Bill Clinton. At the time, Rich was wanted in the biggest tax evasion case in US history.