The decision by the National People’s Congress (NPC) in Beijing – China’s unelected ‘legislature’ – to pass judgement on the oaths dispute in the Hong Kong legislature (Legco) represents a new and serious attack on the fragile democratic rights of Hong Kong people.

This is the latest in a wave of authoritarian attacks on political freedoms, media freedom, the “independence” of the courts, basic democratic rights, and using economic manipulation. It is imperative to call for mass demonstrations as a starting point. The only force that can pressure the so-called Communist Party (CCP) dictatorship to step back is a powerful mass movement which must also strive to get an echo inside China – “in the belly of the beast” – if it is to have any chance of success in pushing back the attacks of the dictatorship.

The current crisis started with the oath-taking ceremony in the Legco on 12 October. The two legislators-elect from localist group Youngspiration, Sixtus “Baggio” Leung Chung-hang and Yau Wai-ching, used the racist name “Shina” instead of “China”, and their oaths were rejected. The Hong Kong government and the conservative pro-establishment camp went into rapture, accusing the two of being in violation of the Basic Law of Hong Kong. They have taken advantage of this issue to mobilise thousands of people “to protest against the insult to China”, and to step up their propaganda offensive. Their aim is to suppress the opposition movement as a whole and provide a justification for more autocratic rule.

Not only is the pro-Beijing establishment now determined not to allow the two Youngspiration politicians to take their Legco seats (the government already plans to hold by-elections), it sees an opportunity to dominate the political debate – “to prevent political chaos in the Legco” and “defend national unity” – and to strike a blow against the whole opposition. Furthermore, for reasons that go far beyond Hong Kong politics, the CCP dictatorship has now also seized on this issue to advance its positions in nominally ‘autonomous’ Hong Kong by intervening through the NPC’s Standing Committee (to interpret Article 104 of the Basic Law).

This will be the NPCSC’s fifth intervention in Hong Kong to give a legal ruling. The NPC is officially, under the dictatorship’s rule-book, the highest legal authority and takes precedence over Hong Kong’s Western-modelled court system. The Youngspiration duo, therefore, with their counter-productive political stunts, have walked into a trap set by the CCP, affording it an excuse to increase its control over Hong Kong.

This is the first such pronouncement by the NPC Standing Committee on Hong Kong issues since the summer of 2014, with its infamous ‘white paper on one country two systems’ which declared that Beijing has “full sovereignty” over Hong Kong, which was followed by the 31 August ruling insisting on a screened, undemocratic, election system. With the Legco elections out of the way, Beijing feels no pressure to show restraint and wants to use this intervention as a demonstration of strength by the central authorities under the newly anointed “core leader” of Xi Dada (Xi Jinping).

This power demonstration is not only to strike a blow against the Hong Kong localist forces, nor even against the Hong Kong masses as a whole, but to assert the power of the centre over lower-level governments. It may also reflect the ongoing power struggle of elite-level factions and vested interests in China, who are competing to strengthen their positions ahead of next year’s reshuffle of the dictatorship’s leading structures. Be that as it may, all factions of the CCP have a common interest in asserting the central government’s authority over Hong Kong.

Furthermore, within this much bigger picture, this episode has given a helping hand to CY Leung, who is facing a concerted campaign by sections of the Hong Kong ruling elite to find a replacement candidate – “Anyone but CY” – for his job as Chief Executive in the upcoming small-circle ‘election’. CY’s popularity rating has fallen to a record low in four years with widespread poverty and other social problems continuing unabated. This, and increased repression, led the establishment camp to suffer setbacks in September’s Legislative Council elections. To outmanoeuvre his conservative “Anyone but CY” opponents, CY has gone on the offensive over the oaths issue with an aggressive “fight the humiliation of China” campaign. This allows him to present himself as the “best defender of China” – i.e. CCP rule – in Hong Kong, and in this way he hopes to win his bosses’ approval for re-election (by a committee of 1,200 ‘electors’) next year. 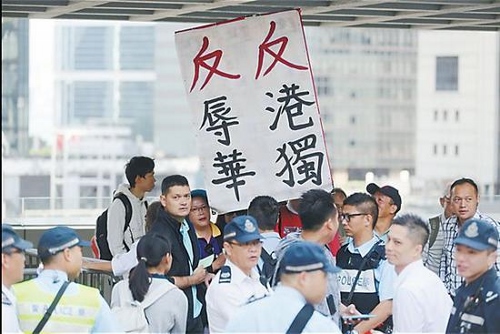 How did Youngspiration get elected?

The Legco electoral defeats for the pro-government camp were the result of mass anger against CY Leung and the worsening social and political crisis. The screening out of several candidates from the “Hong Kong independence” movement by the government acted as a lightning rod for popular discontent against the government especially among young people. This has risen to record levels with the spate of kidnappings of regime critics, and other repressive measures, and has resulted in increased support for independence from China. The government’s undemocratic exclusion of these candidates painted the localists – a very mixed set of groupings – as the main enemy of the government in the elections. Some remaining localist candidates like the Youngspiration duo were able to profit from this wider mood of discontent, because a vote for them was seen as the easiest and most effective way to punish the government.

The Umbrella Movement in 2014 did not succeed in forcing Beijing to make any concessions, as a result of the bankrupt leadership of the moderate pro-democracy politicians (pan democrats) and their limited reform strategy, which is only capable of inflicting political pinpricks on the world’s most powerful dictatorship.

The resulting political vacuum, with the masses looking for a genuine radical alternative that has not yet been created, meant that the various localist groups were able to gain, despite their small real numbers and lack of an alternative. They were able to cash in on the mass turn towards finding new young faces as their representatives, and the perception – actually false – that the localists stand for more militant methods of struggle. Youngspiration in particular are supreme “opportunists” who just happened to be in the right place at the right time i.e. still in the Legco election race while other localists were disqualified. The two legislators actually played a minimal role in the Umbrella movement – Yau admits she was not involved at all!

Socialist Action has explained with hard facts that the localist groups do not propose any programme for the struggle against the dictatorship and rely only on the incitement to racism and anti-immigrant sentiment. This makes them a major hindrance to democratic struggle, which needs to build maximum solidarity and unity of the grassroots layers against the CCP dictatorship. Many who voted for localist candidates as a “radical” and “new” force are not aware that they stand for reactionary anti-working class ideas, including rejection of a basic pension scheme, and opposition to building more public housing, among other positions. In addition, although their support rests on pro-independence feeling more than any other issue, these groups have deliberately blurred this issue, just shouting empty slogans with no clear explanation or plan of how to fight for Hong Kong independence.

Due to the widespread fears among Hong Kong people that the CCP is moving to deprive Hong Kong of its autonomy and limited democratic freedoms, pro-independence sentiment is likely to increase even more in future. But ironically, as the Youngspiration pair have shown, the localists have no understanding of the national question. The use of the racist and colonial term “Shina”, which originates from the Japanese occupation of China and Hong Kong in the 1930s and 40s (the term is banned in Japan since 1946), was a gift to the CCP propaganda machine to distort the truth about the democracy struggle in Hong Kong and weaken the anti-dictatorship struggle inside China. These speeches couldn’t have been more useful to Beijing if they had been written by the Liaison Office (the Chinese government’s agency in Hong Kong)!

Nationalism is being exploited by the rulers everywhere as their capitalist economic system slips deeper into crisis. At root nationalist ideas play on fear and the nationalists’ aim is to blur class differences – to prevent the 99% rising against the power and privileges of the 1%.

The oath controversy highlights the fatal political weakness of the localist groupings, which are unable to articulate a clear programme and methods for the anti-authoritarian movement and therefore rely on crude abuse and gimmicks!

Lessons of the Hong Kong Umbrella Movement – How to move forward?

Crucial lessons need to be drawn from this episode in order to rebuild a mass movement against the dictatorship and its increasing interventions in Hong Kong. This movement needs democratic bottom-up structures and a fighting leadership. The fiasco of the Legco oaths shows there is no room in a successful anti-dictatorship struggle for clownish stunts. In a bitter struggle against a dictatorship which is increasing its repression on every level, acts of defiance and calls to resistance are necessary, but on the basis that these acts strengthen and facilitate the organisation of the masses and raise political awareness. The use of offensive racist phrases has not assisted – but rather complicated – the struggle in Hong Kong.

What’s needed is a united mass movement numbering millions, and stretching to China, above all to its huge working class which is growing restless over wage and pension cuts and rising unemployment. A serious strategy to fight for democracy in Hong Kong and resist Beijing’s control must consciously try to answer and smash the lies of CCP’s giant propaganda machine – not assist this machine by using language and actions that make it more difficult to build sympathy for the Hong Kong struggle. Socialist Action fights for such an alternative – based on a new working class party to break the grip of the tycoons and the dictators. 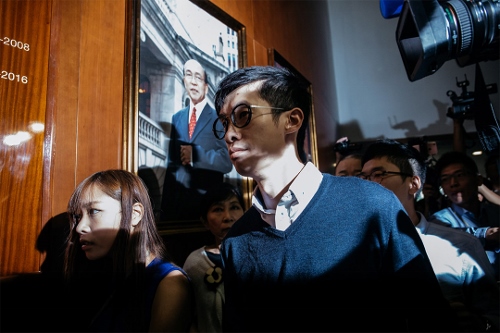