February 8 marks the anniversary of the Mong Kok riot

The first riot in Hong Kong for 50 years is yet another monument to ‘CY’ Leung Chun-ying’s disastrous misrule. The riot on February 8 last year, Lunar New Year’s Eve, was sparked by hardline police methods, and this is partly confirmed by the very different and more cautious approach adopted by the police this year during the Lunar New Year festivities.

Last year’s crackdown on ‘illegal’ street hawkers completely backfired given the prevailing atmosphere of explosive social tensions and also the deep frustration following the failure of the mass Umbrella Movement of 2014 to shift government policy on the issue of democratic elections. The prospects for young people in particular have become bleak. A 2015 study showed median monthly income for the city’s fresh university graduates had fallen to HK$10,860 in 2013 from HK$13,158 in 1993 – a fall of 20 percent over 20 years. Housing in Hong Kong has become an absolute nightmare with the least affordable house prices of 367 leading cities according to a global study. 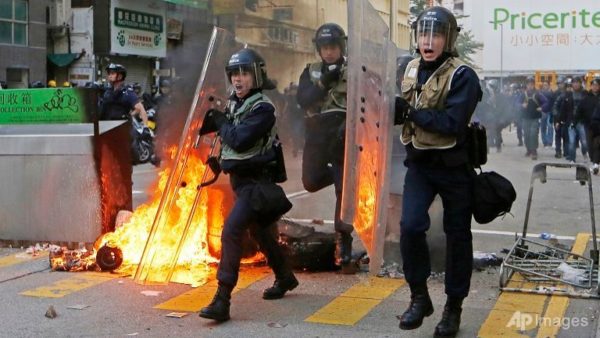 Clashes between youngsters and police raged through the night of February 8-9, leaving 130 people injured. 800 policemen were dispatched to the scene during the night and more than 2o fires were set in dumpsters and trash cans. So far, 90 arrests have been made and court proceedings have been started against 57 people.

For most people in Hong Kong, the riots symbolised the slide into political crisis and polarisation under its hardline pro-Beijing government. CY Leung, having created the conditions that led to the riot, tried to squeeze political and propaganda capital from it. The government has moved even further in the past year to militarise the police – expanding manpower, creating more elite units, and investing in new ‘public order’ weaponry such as more advanced rubber bullets. The politicisation of the police – as a more open tool of government – has continued.

But the government’s attempt to whip up public outrage over the riot to criminalise protest and to paint the anti-government camp as ‘violent’ has largely failed. This message has probably encountered even greater rejection in Hong Kong than in other countries – US, Britain, France – where riots have erupted.

From the outset, so unpopular is CY Leung’s administration, that its message fell flat. Underlining the size of the gap separating the government from the people, a ‘riot leader’ and member of the localist organisation Hong Kong Indigenous won 66,000 votes in the Legco byelection (New Territories East) just three weeks after the riot.

The localists (Hong Kong ‘anarcho-racists’) glorified the riot as an example of a new type of ‘heroic’ struggle. It’s ironic that one year later the fighting talk has been replaced by the darkest defeatism. They were wrong last year and they are wrong again now. Lacking ideas, organisation and connections to the working class, the localists weren’t prepared for the arrests, disqualifications and persecution that has been unleashed against them. To win, more is needed.

Socialist Action does not believe riots can achieve political change. We understand why they happen and we hold the government responsible. But different methods and ideas – based on the historic traditions of workers’ struggle – are needed to effectively challenge a dictatorial regime. A year ago, we said, “To change the system you need to get organised and offer a real political alternative to the current dictatorial capitalist system. A riot doesn’t do that.”