Seven weeks ago most of Britain’s elite were hopeful that May would succeed in dramatically increasing the number of Tory MPs, thereby buttressing her government to be able to weather the storms of economic crisis, to carry out vicious austerity against the majority in society and to implement a Brexit in the interests of the 1%.

Instead she is now a ‘dead prime minister walking’, only able to temporarily cling to power by leaning on the reactionary, sectarian Democratic Unionist (DUP) MPs, describing them as her ‘friends’ on the steps of Downing Street.

The DUP, founded by Ian Paisley, are anti-abortion, anti-LGBT rights and deniers of climate change. However, it will not only be the Tories who are dirtied by this new ‘coalition of chaos’.

The DUP’s base is mainly among a section of the Northern Irish Protestant working class who are badly affected by Tory austerity.

It seems that the DUP have already demanded the dropping of May’s plans to abolish the winter fuel allowance for the majority of pensioners as a condition of co-operation. 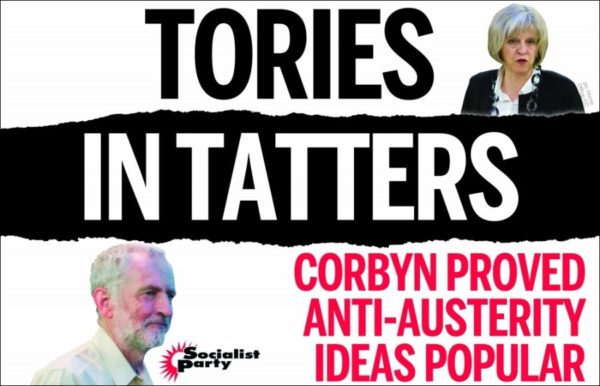 Tories Out! There is no mandate for May

The Tories are split down the middle and now have a leader with no authority inside or outside the party.

She is only remaining in place because the Tories can find no other alternative for now, and fear falling apart if they attempt a leadership contest.

Jeremy Corbyn and John McDonnell have rightly called on May to resign and pledged to put their programme to parliament and challenge MPs to support it.

Now we need to build a movement for the implementation of their policies, whatever the parliamentary arithmetic.

The general election result was a complete vindication of Jeremy’s anti-austerity stance. On 18 April, the day the election was called, the Socialist Party declared that: “If Corbyn fights on a clear socialist programme – for a Brexit in the interests of the working and middle-class – he could win the general election.” At the time that was met with derision by many including the right wing of the Labour Party: who wrongly thought a general election would give them the opportunity to unseat Corbyn.

Let’s not forget that just last September arch-Blairite Peter Mandelson told the press that he ‘prayed every day for a snap general election’ as it would mean the end of Corbyn’s leadership. 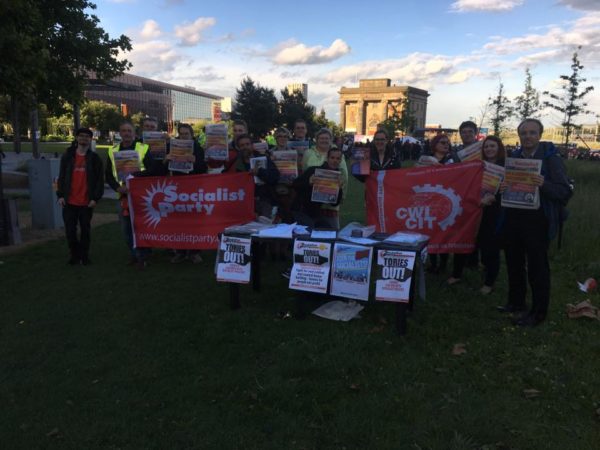 Instead this general election has enormously strengthened Jeremy Corbyn’s position in the Labour Party and potentially in society.

Labour got over 40% of the vote compared to just over 30% in 2015, the biggest increase in the vote share for any party since the Attlee government in 1945.

This was against the background of a phenomenal increase in the popular vote of 3.5 million, from 9.3 million in 2015, to 12.8 million this time.

This was almost entirely accounted for by the streams of young people that flooded to the polls. The very opposite of apathetic young people participated in a mass electoral revolt to demand a future.

Some estimates suggest that as many as 72% of young people on the electoral register voted, compared to 43% in 2015.

Two thirds of them voted for Corbyn. The Liberal Democrat’s hope of winning young, middle class voters by claiming to be the ‘true remainers’ largely fell flat.

Instead Nick Clegg finally got his just deserts for increasing tuition fees in 2010. Corbyn’s programme of a £10 an hour minimum wage, abolition of tuition fees, rent controls, and council house building inspired young people to take a stand.

The resulting politicisation of young people will not be reversed, and lays the basis for the development of mass support for socialist ideas.

The support for Corbyn among young people was widespread among both the working and middle class; demonstrated by Labour’s victory in Canterbury, which didn’t elect a Tory for the first time since 1918.

This reflects the increasing radicalisation of middle class young people who, as a result of low pay and astronomical housing costs, are increasingly being pushed down into working class living conditions.

It is wrong and scandalous, however, as some in the capitalist media have done, to paint this election as ‘young versus old’. This is a conscious attempt to divide the working class which both generations should consciously attempt to overcome by standing in solidarity with each other, whether over tuition fees or winter fuel allowance.

Many older workers, disillusioned with Blair’s Labour, put a cross next to a Labour candidate for the first time in decades in order to support Jeremy Corbyn. In Wales, despite the Tories dreaming of gains at the start of the election, Labour made significant gains.

The figures are not yet fully clear, but the UKIP vote did not simply collapse into the Tories as May had hoped.

Among some who voted UKIP in 2015 (undoubtedly including some ex-Labour voters) May’s false posturing as being ‘tough on Brexit’ meant that they voted for her this time.

Had Jeremy Corbyn not made an early concession to the Blairites by reluctantly agreeing to campaign for ‘Remain’, and instead stuck to his own historic position (and that of the Socialist Party) of calling for exit from the EU bosses’ club, on an anti-racist, internationalist basis, May would never have been able to make the gains she did among working class voters.

Nonetheless, the position Jeremy adopted during the election campaign – of explaining he would fight for a Brexit in the interests of working class people – was able to win over a section of workers including some who had previously voted UKIP.

Even Nigel Farage had to admit that Corbyn had ‘pulled off’ winning the support of both young ‘remainers’ and working class UKIP voters.

The fundamental reason that Jeremy Corbyn started the election campaign so far behind was that the majority of the population had not heard what he stood for.

Of course, this was partly because of the inevitable hostility of the big-business media, but that was – if anything – stepped up in the course of the election campaign, yet support for him soared.

The difference was that, instead of staying quiet in a vain attempt to appease the Blairites, the Corbyn wing of the party took their programme to the country.

The right tacitly accepted this, hoping that Jeremy would then ‘own’ the defeat – instead he ‘owns’ the highest Labour vote since 1997.

This would have been even higher if Jeremy had earlier and more clearly stated he supported the right of self-determination for the people of Scotland, including a new independence referendum if they so wished.

As it was, increasing disillusionment with the SNP’s implementation of austerity in Scotland, meant that Corbyn was able to win increased votes in some working class Scottish heartlands, but it was far less than could have potentially been achieved.

At the same time the Tories made considerable gains in more affluent areas of Scotland, largely by mobilising a certain ‘anti-independence’ vote. (For more information see Socialist Party Scotland article: May Must Go! – Build mass struggle to drive out the Tories).

Jeremy Corbyn’s success now needs to be urgently built on. The trade union movement should call an immediate national ‘Tories Out’ demonstration against austerity – calling for the scrapping of the Tory attacks on the NHS and schools, and for the abolition of tuition fees.

Such a demonstration could be millions strong and the springboard for a 24 hour general strike. This in turn could force May to call a new general election.

At the same time Jeremy Corbyn and the Labour left should make a clear call for Labour councils to stop implementing Tory cuts.

In a short campaign very impressive numbers were convinced to vote for Corbyn despite their initial scepticism about whether he would implement his programme.

This scepticism is a result of the betrayals of New Labour in office, and the experience of Labour councils at local level that have presided over 40% cuts in services since 2010.

To consolidate the enthusiasm that was generated for Corbyn in the election it is necessary to now make clear that he opposes any more council cuts, and that this Tory government is too weak to force Labour councils to implement them.

This is particularly important in urban areas, where the surge to Corbyn was strongest, and where every council in England has elections next year. 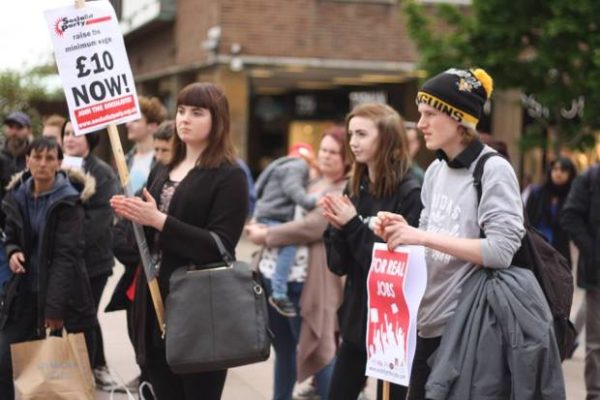 “Big up Jezza for reviving so many ppls hope in politics. If Labour was united behind Corbyn this past year he coulda won this outright!” said Riz Ahmed of the hip-hop trio Swet Shop Boys (one of the many musicians who supported Corbyn) – stating what is obvious to many Corbyn supporters.

Jeremy has not only faced the relentless hostility and sabotage of the capitalist elite, but also from the Blairites – the representatives of capitalism inside the Labour Party.

In the immediate aftermath of this election they will not dare to try and launch another coup against him, but we can’t be fooled into thinking that they are reconciled to his leadership. Labour remains two parties in one.

For the capitalist class Jeremy Corbyn’s policies, and even more the hope they are creating for millions, are a real threat.

Therefore their representatives in the Labour Party will search for a new way to defeat Corbyn. Even in the week of the election right-wing Labour MP Joan Ryan openly attacked Corbyn and banned Labour canvassers from using leaflets which mentioned him! Now in the aftermath of the election Blairite Hilary Benn has poked his head above the parapet to mutter about how ‘Labour must learn from its third electoral defeat’.

Even those Blairites who temporarily make statements supportive of Jeremy cannot be trusted. They will do so in order to try and surround him and force him to retreat from his radical programme.

What else does the ultimate Blairite and would-be assassin of Corbyn, Peter Mandelson, mean when he talks about Corbyn needing to ‘show respect’ to all wings of the party? It was the rights attempts to gag Jeremy which were largely responsible for most people not knowing what he stood for before the election.

We cannot allow this to happen again. Instead a campaign needs to be immediately launched to transform the Labour Party into a genuinely anti-austerity, democratic party of workers and young people.

This requires the introduction of compulsory reselection of MPs. The next general election could be at any time and Labour must not face another election with the majority of its own candidates opposing Jeremy Corbyn.

This should be combined with the democratisation of the party, including restoring the rights of trade unions, and welcoming all genuine socialists in a democratic federation.

These measures could create a party which was genuinely able to bring together all the young people, socialists, workers and community campaigners who are inspired by Jeremy Corbyn into a powerful mass force.

This general election campaign has introduced socialist ideas to a new generation. That is enormously positive.

It has also given a glimpse, however, of how far the capitalists would go to try and sabotage any attempts to introduce policies in the interests of the many not the few.

The hostility Jeremy Corbyn faces in opposition is only a pale shadow of how they would attempt to derail a Jeremy Corbyn led government.

To prevent this will pose the need for far-going socialist measures including nationalising the 100 or so major corporations and banks that dominate Britain’s economy, in order to be able to introduce a democratic socialist plan.

This would allow a socialist government to begin to manage the economy in a planned way under democratic workers’ control and management – that really would be “for the many, not the few.”