Editorial from Socialist magazine (Journal of the CWI / Socialist Action)

Beijing is pushing for greater political control and to quell Hong Kong’s culture of mass democracy protests. Most recently it has been cranking up the volume with calls for Article 23, a national security law that would criminalise opposition to the Communist Party (CCP) regime.

Growing pro-independence sentiment among young people in Hong Kong has rattled the regime. Repression inevitably creates a backlash, but the dictatorship doesn’t learn and believes force and intimidation are the solutions to its problems.

Support for Hong Kong independence has only gained mass support in the past three or so years – as a direct result of Beijing’s heavier hand: mass frustration after the failure of the 2014 Umbrella protests, and the authoritarianism of former Chief Executive Leung Chun-ying. Not for nothing did Leung become known as the “father of Hong Kong independence”.

It is said that insanity is doing the same thing over and over again and expecting a different result. The dictatorship’s answer is to crack down harder. Its henchmen in Hong Kong, like Leung and his successor Carrie Lam, have ejected the pro-independence localists from the Legco and persecuted many activists, driving some into exile. This then became the template for a wider attack on the democracy movement.

Because the localists had no real idea of how to mobilise, to organise a serious political struggle, and were handicapped by a right-wing and racist ideology, they proved a very easy target for Beijing to suppress. The organisational collapse of localism however did not mean the end of pro-independence ideas. On the contrary, among youth in particular, anti-China sentiment is becoming even stronger. Who can be surprised by this?

The government’s response is to ‘rinse and repeat’ – more repression, more threats. On 1 October, China’s pseudo-parliament, the NPC, passed a new National Anthem Law imposing stiff sentences on acts of ‘disrespect’ – up to three years in prison. The law will be copied onto Hong Kong’s statute books just as soon as the NPC can amend the Basic Law.

The right-wing pro-Beijing establishment – politicians who have openly called for pro-independence advocates to be “killed like pigs and dogs” – want the law imposed retroactively. This is so that old “offences”, mostly cases of Hong Kong football fans booing the Chinese anthem at games, can be filmed enabling police and prosecutors to press charges under the new law when it is introduced. More police and undercover police agents are being sent to the Hong Kong team’s matches to record these “criminal” acts.

This is a monstrous waste of public money and police resources. At the same time real crime involving the theft of billions and the manipulation of government contracts to enrich a corrupt elite at the public’s expense are going unpunished.

With Xi Jinping’s control within the Chinese regime now apparently cemented, Beijing is in triumphant mood – to the point of hubris. The economy, we are told, has ‘stabilised’ and China’s global political influence is expanding. Hong Kong has therefore become a test ground for Xi’s regime, which represents China’s billionaire elite, to demonstrate its resurgent power.

The current raft of undemocratic measures aims to break the democracy movement in Hong Kong by attacking its more struggle-orientated and radical sections such as ‘Long Hair’ and the League of Social Democrats (LSD), while pressuring the moderate pan-democrats to kowtow – to accept that full democracy is ‘non negotiable’ and further distance themselves from mass protests.

The pan-democratic leaders have been a major brake on the democracy struggle with their blind insistence on reaching a compromise with an uncompromising regime. They fear mass struggle and take part in democracy protests mainly to hold back the movement and prevent ‘radicals’ from gaining a bigger foothold.

But even those pan-democrats who want to call off the struggle and accept Beijing’s terms, understand that this would lose them all support among the masses. These pressures can come to a head in the next period with the regime’s renewed drive for Article 23. 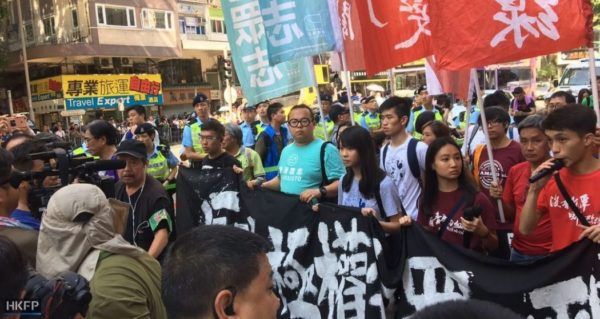 A succession of mainland officials and pro-Beijing politicians have joined the chorus calling for Carrie Lam’s government to relaunch Article 23, which was spectacularly defeated in 2003 due to massive public opposition. Rao Geping of Beijing’s Basic Law Committee recently said moving ahead with this legislation was a “matter of urgency”.

Lam’s public comments show she is less than enthusiastic, insisting she will bring in Article 23 legislation when a “suitable social atmosphere” exists. She is mindful of Hong Kong’s history, the explosive movement of 2003, even if Beijing is dismissive of such ‘details’. That movement ended the career of her predecessor Tung Chee-hwa.

As Beijing pushes for more repressive measures the pan-democratic leaders are forced to offer verbal opposition while offering no lead, no strategy, and no programme to fight back and defeat these unprecedented attacks on democratic rights.

On 20 August, when 140,000 people turned out to protest the jailing of 16 young activists, the moderate pan-democrats were forced to join the march – but they had not called it. This huge march was initiated by four smaller and more radical groups including the LSD and Northeast New Territories land activists. This example shows how a mass movement can quickly improvise new organisations and a new leadership, in the heat of events. What is most needed is a clear idea of what to do.

It was similar in 2014, when the Umbrella mass occupations broke out from below, initially by youth and students ignoring the ‘leaders’ such as the Occupy Central campaign, who wanted to postpone and limit the struggle. Occupy Central was set up by moderates and liberal intellectuals close to the pan-democratic leaders to give them control and cut across more radical alternatives. Occupy Central leaders refused to support the student strikes and protests, which were what sparked the Umbrella movement.

In order for the democracy movement to reorganise and effectively resist Beijing’s attacks it must take stock of these lessons. There is no shortage of fighting spirit among Hong Kong people for this struggle. But a fighting leadership is needed that can offer a clear strategy, rather than continually demobilising and lowering expectations.

The pan-democratic leaders, with their attachment to capitalism, a system that needs the Chinese dictatorship and blocks any attempts to ‘destabilise’ its power, reject such a fighting approach. They always opt for ‘compromise’ as opposed to struggle.

A new democratically-controlled movement is needed, based on the working class and appealing to the masses in China – whose discontent is growing – to make common cause against the dictatorship.

A mass workers’ party, attracting the fighting layers of the democracy struggle to its side, could link this to the struggle against slave-like work hours, low-pay and dead-end jobs, for affordable housing and more investment in public services such as healthcare and education.

The same undemocratic elite – the capitalist tycoons and CCP officials – are what blocks any solutions to all these problems. Socialist policies, linked to immediate and full democracy, are the way to win.

July 2017 Carrie Lam sworn in with talk of “reconciliation”.

August 2017 Two retrials of ‘umbrella’ and land rights activists send sixteen to prison for terms of 6 to 13 months, overturning lighter sentences that have already been served.

August 2017 Mass demo of 140,000 people against the jailings and the government’s manipulation of the courts.

October 2017 National Anthem Law passed in NPC. To be introduced in Hong Kong.