No peace with Kim and Trump

Despite all the commotion, the actual outcome of the Singapore summit was very limited. The agreement signed by President Donald Trump and North Korea’s leader Kim Jong-Un contains few concrete commitments and there is no timetable to reach the goal of peace and a complete nuclear disarmament on the Korean peninsula. Instead, only new negotiations are agreed, although this at least means a temporary freeze on the dangerous war rhetoric.

It is not the first time that the US and North Korea have signed agreements that were initially described as “historic” but quickly lost significance. The likelihood is that this agreement will go the same way.

In a world characterised by increasing rivalry between imperialist powers, steps towards trade war and militarisation, each treaty and agreement between countries and governments tends to be temporary, unstable and unsustainable. In the absence of lasting solutions, the motivation instead becomes to win time, prestige, potential popularity and, as in this case, a means to get out of the corner that the Trump administration had painted itself into. 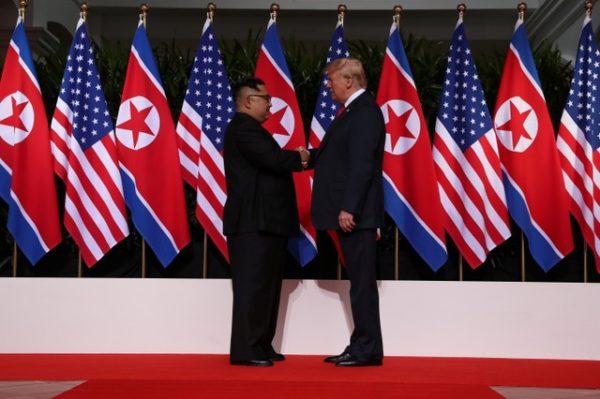 Trump went to Singapore after the Group of Seven (G7) meeting in Canada ended in a historic and open conflict with former allies and after disavowing the joint statement Trump had initially endorsed. (The G7 is the US, Canada, Japan, Germany, Britain, France and Italy with the EU as observer)

“The G7 summit once again made it clear that Trump is intent on treating America’s allies worse than its enemies. Europe must draw the consequences and seek to isolate Trump on the international stage,” Germany’s Der Spiegel wrote in an angry comment afterwards.

Before the G7 meeting, Trump had fired the first shots in what could be a trade war, cancelled the nuclear energy deal with Iran, and taken the US out of both the Paris Climate Treaty and the Trans-Pacific Partnership (TPP).

Trump’s politics can be summed up in “America first”, which also reflects the type of agreements, preferably bilateral, that US imperialism wants to replace its previous international agreements with.

But after coming into collision with even its oldest allies and with important elections approaching in the US, the Trump administration needed a deal that would give the impression there is still some substance in the recurring boast, “I’m a good, successful negotiator”.

In addition, the Trump administration had painted itself into a corner with its many warlike noises against North Korea last year, and needed to find a way to pull back from the Armageddon that would result if Trump was ever to make good on those threats. Furthermore, a deal with the Pyongyang regime could help reduce the influence of China, the main rival of the US, in North Korea. The latter is a wish that Kim Jong-Un shares.

North Korea’s ruling elite sees nuclear weapons as a means of securing its future, gaining international recognition and access to the world market. After testing one, according to its own report, hydrogen bomb and carrying out several missile tests, the dictatorship was ready for talks, diplomacy and a meeting with Trump, who saw an agreement with North Korea as an opportunity to play the role of a great peacemaker and, if possible, turn attention away from the crisis and militarism of US imperialism.

An agreement reached on this basis does not open the door to peace or real nuclear disarmament on the Korean peninsula.