The fuse for today’s unprecedented protest movement in Hong Kong was lit a long time ago by the Chinese regime with its attempt to perpetuate an elite-manipulated and undemocratic form of brutal capitalist rule.

On Saturday it will be five years since the infamous August 31 ruling by the Standing Committee of China’s pseudo parliament, the National People’s Congress. The NPC’s ‘831’ ruling became the trigger for the 2014 Umbrella Revolution of mass protests and 79 days of continuous street occupations. That movement too, like today’s even bigger and now even longer lasting (today marks the 80th day) protests against the extradition law, was propelled forward by police violence against youthful protesters.

The NPC Standing Committee’s ruling exploded like a bomb in Hong Kong where many, but especially the city’s pan-democratic opposition parties, had taken at face value the Chinese regime’s earlier vaguely-worded promises to accept a transitional timetable towards one-person-one-vote elections (universal suffrage) for choosing Hong Kong’s leader (Chief Executive) and Legco (Hong Kong’s largely powerless parliament). The ‘831’ ruling made clear this will never happen – not on the dictatorship’s watch!

Socialist Action, the CWI in Hong Kong, and chinaworker.info, the voice of our mainland Chinese comrades, warned long before this that the notion of the dictatorship tolerating a form of ‘Western-style’ democracy in Hong Kong was a cruel deception. The dictatorship’s earlier soundings on the issue had largely been playing for time – a filibuster. 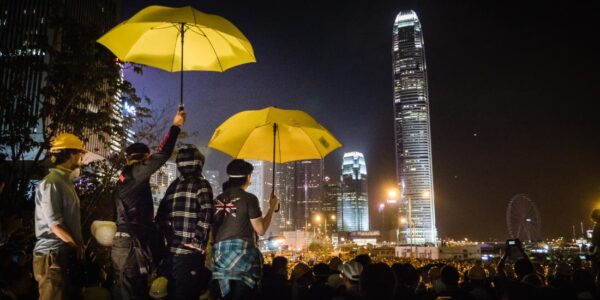 Chinese capitalism, the rule of a ‘Communist’-linked industrial and financial oligarchy, requires a dictatorial machine complete with the world’s biggest police state to keep the populace and especially the working class, whose blood and sweat produces China’s wealth, in chains. It has become part of the DNA of the ruling group, reinforced since Xi Jinping’s rise to power, that “democracy” and “Westernism” are plots to destroy China, to unleash social chaos, possibly ripping the country apart.

Rather than lessening, the regime’s authoritarian features have increased. Vetoing any democratic “reform” in Hong Kong five years ago has been followed by vicious repressive laws, a purge of elected opposition lawmakers, election rigging, and political show trials against democracy activists. Processes inside China have followed a similar pattern with multiple crackdowns on labour activists, left-wing students, human rights lawyers and radical bloggers. This has culminated in the regime’s refusal to allow its puppet Carrie Lam to make even small concessions to the current Hong Kong mass movement for fear of losing face.

Not only this, the Hong Kong capitalist tycoons who with the CCP’s blessing wield the real power in the territory, are equally antagonistic and fearful towards democracy, which would threaten their cosy world of lucrative secret business deals, tax haven privileges and super-profits. The real position of the tycoons is shown by their public declarations of loyalty to the government in recent weeks and their calls for the mass protests to end.

How was democracy won?

Understanding how democracy has been achieved throughout history, as a result of mass revolutionary struggles in which workers’ organisations such as trade unions and socialist parties have played the most important role for more than 100 years, with the capitalist class standing for counter-revolution and dictatorship, socialists were able to predict and warn that the Chinese regime’s democracy ‘pledge’ was fake.

This bottom-up view of how democratic rights have been won – the only historically accurate view – totally contradicts the ideas of the pan-democratic politicians and academics who hold to a top-down conception: that “enlightened” capitalist governments are somehow the guardians and promoters of democratic rights. Seeing the real historical picture allows us to point out the folly of calling upon right-wing (and far from “enlightened”) Western leaders like Trump, Johnson and Merkel, or the US Congress, to “save Hong Kong”.

The CCP’s political fraud was in turn what was used for almost three decades by the leaders of the pan-democratic parties in Hong Kong to justify their faith in political reform: seeking deals with the CCP dictatorship and its Hong Kong representatives and applying the brakes to one mass struggle after another, lest these become “too radical”, because this was supposedly the only “realistic” road to achieve democratic rights under a powerful dictatorial regime. ‘831’ put an end to this charade and stripped the pan-democrats of their “political reform” clothing.

Here we reprint Socialist Action’s statement from five years ago analysing the meaning of the ‘831’ ruling:

This offers important insights into how events have subsequently developed in Hong Kong and not least the powerful explosion of protest we are now witnessing.