Oppressed People of the World, Unite!

On 8 November, supporters of Socialist Action (CWI in Hong Kong) and the League of Social Democrats, including wrongly disqualified legislator Leung Kwok-hung staged a protest at the Chilean Consulate in Hong Kong, against police violence and in solidarity with the mass struggle. This statement was presented to representatives of the Chilean officials.

As the people of Hong Kong are fighting against authoritarianism in an historic movement, the Chilean masses have also risen up in an incredible mass struggle. We are here today to express our international solidarity to the Chilean masses. 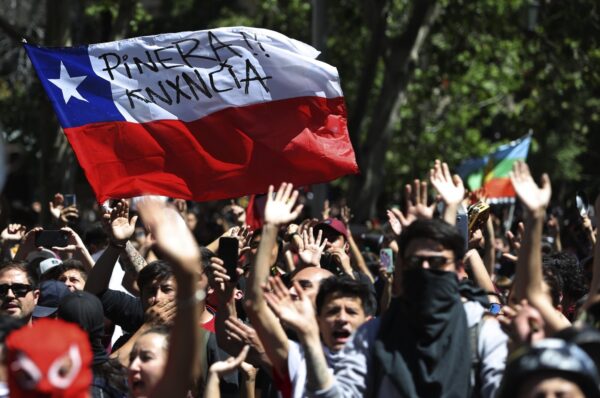 The movement in Chile broke out initially due to a price hike of the Santiago subway. High school students led the first protests, jumping over turnstiles and later escalating into occupying train stations. On Oct 26, 1.2 million took to the streets, which became the largest protest ever in Chile. The movement has since transformed into a struggle against the country’s unfair political and economic system as a whole, as well as the brutal and violent repression by the police and military. More than 30 unions called for a two-day strike, which included the main dockworkers’ union, the miners’ union and the teachers’ union.

Chilean President Sebastián Piñera sent 8,000 soldiers into the capital in a “military takeover”, and announced the first curfew in 32 years. The Chilean police, like the Hong Kong police, violently attacked the protests, firing tear gas canisters and rubber bullets at armed protesters. The Chilean struggle reminds us that we are not alone in this fight.

President Piñera was later forced to make concessions. He promised to raise the minimum wage and state pension, freeze the cost for electricity, and increase the tax for the rich. But as one of the slogans of the Chilean protests stated, “It’s not about 30 pesos, it’s about 30 years”. The people did not back down, they were not prepared to accept small concessions only, they were fed up with the whole system. The protesters are now calling for the President to step down, a complete withdrawal of the military, and to convene a new constituent assembly in order to completely get rid of the current “capitalist first” constitution, which is a legacy of the Pinochet dictatorship.

Hong Kong and Chile are both “market economy laboratories” of Asia and Latin America respectively. Both governments over the last 30 years have been privatising public services from education, utilities to transportation. The domination of private capital means that prices are higher than ever, while corruption has become worse and worse. The people have been deprived of their basic living needs. The so-called “economic miracle” in Chile, as with the “freest economy in the world” of Hong Kong, are both based on super-exploitation.

With public utilities being controlled by crony-capitalists, social inequality has got worse and worse. The Chilean President himself is the third richest man in the country, his family has interests in the finance, telecommunications and media industries. His policies favour the military and the corrupt. His pro-capitalist regime must go!