MTR has become a new hate symbol within the mass anti-government struggle. MTR management closely collaborate with the CCP-led police crackdown, closing stations and services in coordination with police operations and with no regard for the traveling public who the company is supposed to serve. 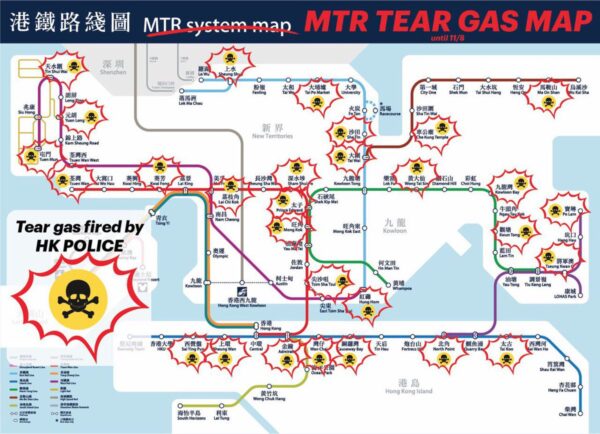 Consequently, the MTR has been targeted for destruction by some protesters. Over 40 percent of stations have suffered some level of vandalism, at a reported cost of over HK$50 million.

When MTR closed the airport express as part of a police operation against the airport protests, even a stockbroker put the blame on the MTR management: “I really blame the MTR for starting the airport fiasco. Many people had to walk for hours to get out of the airport, like refugees. I think that was irresponsible,” he told the South China Morning Post.

“This is the price the company is paying for acting like a sub-branch of the police force. Riot police use gas and rubber bullets inside MTR stations in violation of strict safety laws,” said Jackson of Socialist Action.

Vandalism is never a good method to win support. Strike action by workers would be a more effective way to prevent the public transport system being hi-jacked as a tool of the repression. But the anger and frustration of young protestors after much blood has been spilt is understandable.

MTR is a government-owned company. But it has never been under democratic public ownership or control, which is why even before this year’s mass revolt its policies have been extremely harmful to Hong Kongers:

Socialists fight for democratic control of big companies like MTR. The boards of these companies should be elected by workers and ordinary voters, and should receive regular workers’ pay instead of today’s fat salaries and bonuses. Workers’ unions should have day-to-day control of the running of services, with management elected and supervised by the public at large along with unions.

The mass struggle needs to take up these issues to win and maintain support. Most people make allowances for vandalism which grows from anger against the brutality of the system. But vandalism cannot become a long-term strategy or support will begin to fall away and this can be exploited by the government. A worker-orientated strategy is needed for the movement, focused on strike action and friendly appeals to ordinary workers in all sectors, including the MTR, to try to build unity in the struggle. The power of big undemocratic corporations needs to be broken. Socialist Action stands for democratic public ownership and working class control as the only way to end big business tyranny.