Jasper Tsang is one of the founders of DAB and a pillar figure within Hong Kong’s establishment camp, albeit one known for a measure of independent thinking. His interview with French scholar Jean-Philippe Béja published in HKFP reveals the full extent of the splits within the ruling class.

Tsang says there are four main protagonists in the current crisis: The protesters, the public, the government and Beijing. In the interview, conducted in October just after the government passed the anti-mask law, Tsang has no doubt that a “large part of our population” supports the protests.

“Our biggest problem is that the weakest of the four players is our government. There is no strong decision-making mechanism. The CE listens to the hardliners, and there is no politician who could take responsibility.”

Tsang agrees that this is “the largest movement in the history of Hong Kong” and says that, with the benefit of hindsight, nobody should have been taken by surprise. The politicians “should have known” people in Hong Kong, especially young people, were angry with the government over economic equality and the lack of democracy.

As a student Tsang participated in the Maoist-led revolt against British rule in the 1960s. His brother was jailed for 18 months by the British. Like many former Maoists in Hong Kong, Tsang and the rest of the DAB have marched in lockstep behind the CCP’s transition into a regime that defends capitalism but with the methods of an ultra-repressive “party” state. The DAB is effectively the CCP in Hong Kong, because the CCP itself does not operate legally in the territory.

Tsang admits the pro-CCP establishment – himself included – sowed the seeds of the current crisis with their white terror against the democracy movement after the Umbrella Revolution of 2014:

“In the last five years, the Hong Kong government and many of my colleagues in the pro-government camp thought that we were winning victory after victory; but every time, people became angrier.” 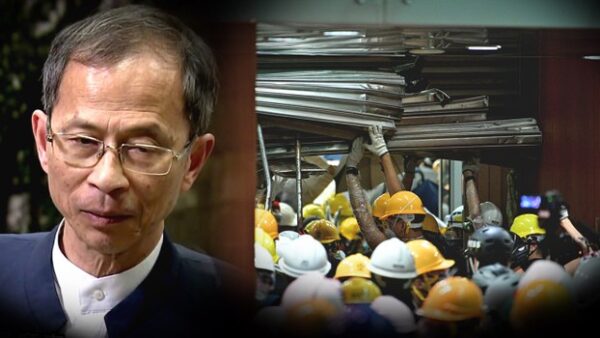 Pro-establishment argue for an independent commission

Tsang argues for political concessions to defuse the protests, especially for the government to accede to an independent commission to investigate the police. But this is being blocked by “hardliners” – a euphemism for the CCP regime.

“Almost everyone” he says, including the DAB leadership – but only in private – have been urging Carrie Lam to adopt this approach. This is “the only demand that could be met” says Tsang, who of course regards the demand for free elections as utopian.

In reality, the CCP regime now views any questioning of the police as a red line. The police have become its Pretorian Guard to implement a Tiananmen-in-slow-motion, forestalling the need to use mainland troops. For this reason, despite a majority of the local capitalist establishment wanting to meet this demand, of course in a very watered down form, it has been killed off by Beijing.

That the ruling elite in Hong Kong is in crisis and more divided than ever does not mean we can put any hope in them to have a change of heart or deliver solutions. Real democratic change can only come about by the working class organising itself and fighting to take the power away from the capitalists and the authoritarian regime that defends them.