The Korean film Parasite caused a sensation at the 2020 Oscars ceremony taking 4 awards including the first non-English language film ever to win “best film” . The film contrasts sharply with the Hollywood standard because it portrays class differences in modern neo-liberal society. 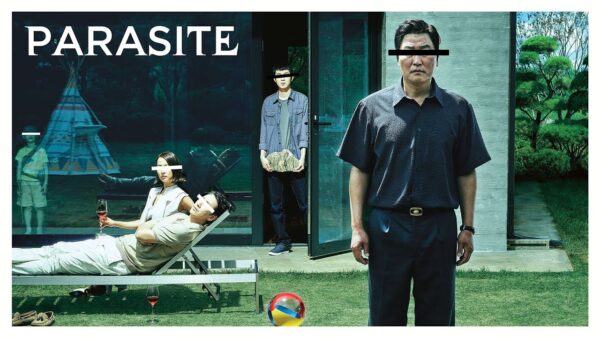 “They all smell the same,” says Da-song, the son of the rich Park family, about the four members of the Kim family who crept into the villa of the Parks as domestic servants under false names and claiming not to know each other. They can’t get rid of the smell of poverty, the cellar-like smell of their eternally damp basement apartment.

Through the recommendation of a good friend, the son of the Kim family, Ki-woo, gets a job as an English tutor in the household of the Park family. He, his sister and his parents live a precarious life and are mostly unemployed. They have their talents, but they fail almost every time. Like the family’s artistically gifted daughter Ki-jeong, who repeatedly fails the art academy and can only develop her talents by forging documents.

Ki-woo succeeds in accommodating all the members of his family into the Park villa. Ki-jeong becomes “art therapist” for Da-song, who had been traumatized in early childhood, their father, Ki-taek — chauffeur and mother, Chung-sook — housekeeper. Ki-taek explains to his children that they shouldn’t make plans, because if they go wrong, they will be bitterly disappointed. Soon it becomes clear that even without plans everything can go wrong.

Director Bong Joon-ho depicts the wealthy family Park without any sympathy. The characters are hollow, you can’t even feel any sympathy for the children. One hopes that Kim’s family will succeed at least in something. They are a bit broken, but living people with solidarity holding them together.

Bong leads us to the question “who are the real parasites?” The Kim’s have lied and are trying to get hold of the Parks’ alcohol supply, but they work for their money every day, cooking, driving, teaching or playing, jumping on command, with the threat that any time they will be fired because their boss doesn’t like their smell.

As in many of his films, such as “The Host” or “Mother”, the director lets the losers and the maltreated collide with the rich and powerful, with a lot of empathy for the poor, with humor, outbursts of violence and some theatrical blood. Bong Joon-ho illustrates the sharp class differences and competitive pressures of South Korean society in a language accessible worldwide.

Keynesianism and the crisis of capitalism

Book Review: Revolutionaries they could not break, by Ngo Van