US: We Won’t Die for Wall Street

This pandemic has laid bare how rotten and brutal capitalism is. It doesn’t have to be like this.

In recent weeks, the bankruptcy of global capitalism has been exposed to millions as its representatives have failed to take the measures needed to stem COVID-19’s spread.

This has been no accident. As scientists and health care professionals shouted themselves hoarse over the need for an urgent response, Trump and the political establishment were slow to act out of a desire to defend business-as-usual and Wall Street profits.

The horrifying count continues to rapidly rise. There is little doubt that many millions are now infected around the world. And while this has been concentrated in countries with developed economies, the biggest human toll is likely to come in less developed economies with weaker health infrastructures.

In areas that have taken more proactive steps, such as with South Korea’s mass testing program of 10,000 people daily, or in Seattle, Washington, which saw the U.S.’s first recorded case of novel coronavirus and where social distancing and other measures were adopted sooner, the curve of contagion has been somewhat flattened.

In Seattle, these measures, while still limited, were driven by pressure from social movements. Seattle’s socialist City Councilmember, Kshama Sawant, urged immediate action at the beginning of the outbreak and organized working people to make a series of demands on the political establishment, including free testing and treatment, guaranteed paid sick leave, ability to work from home, suspended rent and mortgage payments, while emphasizing the crucial need for mass testing. Though the measures taken were very far from enough, they show that when we fight, we can win gains, even in the conditions of a pandemic. 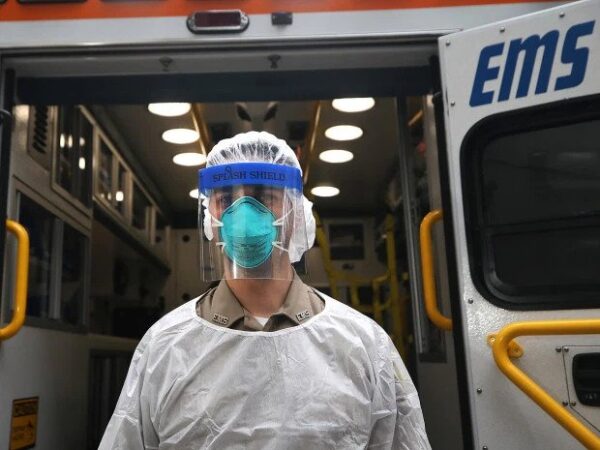 At the same time, Trump has been the world’s poster child for recklessness in his absolutely criminal approach to the crisis.

Trump’s initial response was to dismiss the threat of the virus (“This is like a flu.” he said.) and a month was lost. He then failed to take the stepsneeded to step up the supply of protective gear or tests for frontline workers,including the nurses and doctors. Local governments report acute shortages of facemasks, personal protection equipment, test kits and ventilators.

The U.S. is the new global epicenter of the pandemic with projected deaths of between 100,000 and 240,000. New York State has over 83,000 confirmed cases, more than in Hubei province in China.

In spite of the horrific human costs, Trump and the U.S. ruling class are itching to reopen the economy, in an attempt to restore profits and stock prices.

On March 24, Trump vowed to lift coronavirus restrictions by Easter, saying “You’ll have packed churches all over our country … I think it’ll be a beautiful time.” Under intense pressure to back down, he adjusted his message, calling instead for April 30 for a general return to work.

But well before Trump’s Easter proclamation, the Wall Street Journal editorial board declared, “This won’t be popular to read in some quarters, but federal and state officials need to start adjusting their anti-virus strategy now to avoid an economic recession.”

Most brutal have been the right wing pundits like Glenn Beck who have called for “economic patriotism,” particularly by older Americans, to immediately go back to work and die as needed, to get the economy back on track.

The difference between the “economic patriotism” of right-wing pundits and the wider elite is mainly in the degree of directness, not intent.

The mainstream view of the ruling class was summed up by Dick Kovacevich, an executive at Cisco and Cargill: “We’ll gradually bring those people back and see what happens. Some of them will get sick, some may even die, I don’t know … Do you want to take an economic risk or a health risk? You get to choose.”

It is true that an economic catastrophe is underway alongside the pandemic. There are projections that 30% of American workers may be unemployed within the next month, rivaling the Great Depression. But while Coronavirus has had a huge impact it was the tipping point for a global capitalist crisis which already had the potential to be more serious than the Great Recession of 2008-9 even before the pandemic.

New York’s Democratic Governor Andrew Cuomo recently said on CNN, “We’re talking about protecting lives. There also has to be a parallel track that talks about economic viability … You can’t stop the economy forever, so we have to start to think about does everybody stay out of work?”

Of course economic activity needs to reopen at some point, but under what conditions, in whose interests, and how are these decisions made? Representatives of workers in key sectors from manufacturing to education need to have a direct say and veto in this process.

Left to their own devices the bosses and the corporate politicians will move to reopen sectors of the economy heedless of workers’ safety. And if they ask us to put our lives on the line for their profits, we will need to organize in our unions and with our co-workers to fight back.

We should also be clear that the ruling class and Trump may use the opportunity of the pandemic to move to restrict basic democratic rights which we should also resolutely oppose. This has already happened in country after country, from Chile to Hungary.

The ruling class’s priorities were clearly reflected in the March 27 stimulus package.

The bill included a whopping $425 billion in corporate bailouts which is being used to capitalize an incredible $4 trillion in loans for big business compared to a far smaller amount for ordinary people. Even the inclusion of limited measures for workers is not due to the growth of a conscience, but rather the recognition that without putting some money directly into people’s pockets the economy could collapse completely.

Democratic presidential contender Bernie Sanders successfully defended a substantial expansion of unemployment and other protections, while AOC raised sharp criticisms of the bill. But we should be clear it was a mistake for them to vote for the bailout package. Working-class representatives should not give left cover for a rotten political establishment in exchange for limited reforms.

At the root of the U.S.’s vulnerability to coronavirus has been not only Trump’s breathtaking failures but also the lack of a Medicare for All style health care system. Both Republicans and Democrats have long fought fiercely against public health care – their determination to put profit before human lives didn’t begin with the current crisis. In reality we need to go further than Medicare for All, toward a socialized medical system in which the hospitals, health care, and pharmaceutical industries are taken into democratic public ownership, and run by the workers on the basis of human health and not profit.

In the past month, the Democratic establishment has pulled out all the stops to carry out a coup on behalf of Joe Biden – who has made it clear he would veto Medicare for All – in order to block Bernie Sanders and his political revolution. Yet Biden has been so utterly inept at responding to the pandemic that there has even been speculation about an intervention at the Democratic Convention to replace him with a more capable representative of the ruling class like Andrew Cuomo. But while we completely understand the desire of many to get rid of Trump at all costs, working people can’t support Biden or Cuomo. We need to fight back against the entire corporate establishment.

In order to win Medicare for All, affordable housing, or other real gains in the context of the global meltdown of capitalism, we need to get organized.

In the last days and weeks, working people have initiated heroic struggles against their bosses. From Instacart workers to sanitation workers in Pittsburgh to health care workers in NYC, there is a growing fightback taking place.

Workers and our unions must reject any suspension of collective bargaining or the right to form a union. We must also demand “hazard pay” to all essential workers, who should be paid at least “time and a half” during the pandemic. Companies that refuse to operate under these rules should be taken into public ownership with democratic workers control and management.

Around the country, people are out of work and the rent is about to come due. An organization called Rent Strike 2020 is working with Socialist Alternative and others to build for rent strikes in the coming weeks with a demand for suspension of all rents and mortgage payments during the pandemic. If these demands are not met, they may call for a mass rent strike on May 1. A successful rent strike on this scale will require a high degree of organizing in buildings, in neighborhoods, on a citywide and a national level.

This pandemic has laid bare how rotten and brutal capitalism is. It doesn’t have to be like this. We need to fight not only for emergency measures during the pandemic but also for an alternative to this sick system – for a socialist world in which the resources of society and big corporations are democratically owned and planned in a sane and sustainable way, for our needs instead of their profits.