US: Eye-Witness in Minneapolis: Mass, Coordinated Action Needed to Win

No Trust in the Same Political Establishment That Killed George Floyd

George Floyd gasped “I can’t breathe,” again and again, for nine long minutes. This is murder. It is murder at the hands of the Minneapolis Police. Yet the recent racist killings of Breonna Taylor and Ahmaud Arbery, and the countless cases of racist police murder over the last few years show how commonplace this is in America.

Minneapolis now resembles a police state. The National Guard is occupying key points of the city with tanks and automatic weapons, including bridges and intersections which have been occupied by protestors in recent days.

The Third Precinct police station is still smoldering, and the nearby 5th Police Precinct is surrounded by barbed wire and barricades. Thousands of volunteers are cleaning up the streets and most businesses remain boarded up, yet in an inspiring display of the deep solidarity that still exists, painted on top of the boards are statements of ongoing solidarity.

A lot of businesses in the #ShortNorth Arts District near downtown are boarded up. Some by necessity, others out of caution. And some of the boards on those business convey messages such as “This is on us. For generations they have called the youth stupid, stripped funding from their programs, kicked them out of places and ignored them. What would you expect??? Don’t lock your doors tighter, open your hearts wider. Spread love.“

What’s happening in Minneapolis is a working-class rebellion, headed by young people of color. They fearlessly confronted heavily armed police officers during 24-hour protests and occupations, winning an indictment of the officer that killed George Floyd in the process, and sparking a new wave of the black freedom movement which is spreading nationally, with solidarity protests taking place internationally too. The Democratic Party establishment that runs Minneapolis, and currently runs the state, is working overtime to repress the protests, and channel the movement into more established channels which have routinely failed black and brown people.

We need to be clear about who’s “ruining our city”: the racist police, the political establishment, and big corporations.

There is a real danger of the far right being emboldened with Trump tweeting things like “looting starts, shooting starts.” There have been examples of genuine threats, but the political establishment has amplified the threat of “outside agitators” and right wing militia interference as an excuse to crack down on the genuine protesters.

Media outlets claim that the protests are being directed by “outside agitators” or anarchists and “antifa.” Anyone who’s participated in the Minneapolis rebellion knows this is absolute nonsense. How could “outside agitators” be the key factor in protests that have spread to every major city? What’s happening is an uprising of working-class people with youth of color at the forefront. Trump is threatening to designate “antifa” as a terrorist organization as a distraction to whip up his right-wing base and to try to divide the movement. We need to respond with unity, solidarity, and mass action.

The largest deployment of law enforcement ever in the history of Minnesota is not aimed at stopping white supremacists. If it was, where are the arrests of them? What has been well documented from the “good and righteous” National Guard response is the targeting of journalists, even shooting a photographer in the eye with a rubber bullet, who were covering peaceful protests, and terrorizing working-class people trying to organize neighborhood watch programs to keep people safe.

In fact, working-class people, especially people of color, have been most effective at stopping vigilante violence. For example, when a sketchy looking person was seen trying to start fires at a Somali mall, the Somali community organized to confront him while the police and National Guard ignored reports. In another example, protesters confronted a suspected undercover police officer breaking windows and starting fires at an auto parts store across the street from the Third Precinct. Today, a fuel tanker tried to plow into a large protest on an interstate, and the police and National Guard responded after the event, and then maced and teargassed terrified protestors to leave the bridge.

So far, the National Guard has shown no credible proof of actually stopping a white supremacist threat, yet the political establishment and corporate media continues to emphasize this because it provides a useful pretext to suppress the ongoing protests and solidarity. For example, people have been told to take solidarity signs out of their yards because of the threat of vigilante attacks on their homes. Of course with Trump’s tweets and events like the white terrorist attacks in Charlottesville in people’s minds, there is a threat, but the organized working-class community defense committees that have sprung up are a far more effective tool to address real threats than the National Guard.

Mayor Frey’s and City Hall’s use of the National Guard threatens to cut across the very protests that already won important victories. Initially, Hennepin County Attorney Mike Freeman delayed arresting the cop that killed George Floyd, claiming he had undisclosed “additional evidence” that pointed away from prosecuting the officers. The day after the Minneapolis Police fled the 3rd Precinct station, which was subsequently occupied by protestors and lit on fire, Officer Derek Chauvin was arrested and charged. The lesson here is direct actions gets the goods. 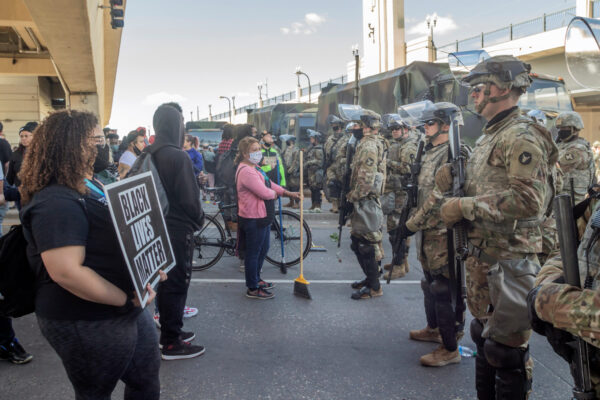 The following day, mass protests continued chanting “one down, three to go,” referencing that the other officers who helped murder George Floyd still had not been charged. In addition, City Hall has made no indication that they have any intention to make any structural changes to policing in Minneapolis. There is still much work to be done, and it would be a critical mistake to put any faith in the same political establishment that got us here to resolve the crisis.

Minneapolis’ own history offers valuable lessons on how to address the intervention of the military. During the 1934 Teamsters Strike, the National Guard mobilized to suppress the strike. They shot striking low-wage truck drivers, terrorized strike organizers’ families, and arrested the entire leadership of the Teamsters. It was ineffective because the socialists who organized the strike had set up truly democratic structures for the movement, which could both carry on the strike under repression, and also handle questions of public safety.

Already, thousands of people in Minneapolis’ working-class communities are organizing committees to clean up the neighborhoods, provide medical aid to those attacked with tear gas, rubber bullets, and mace; notify each other of potential threats; and keep people safe from both the National Guard and the threat of vigilante violence. The local labor movement should play an active role in this process as well, putting in real resources to help.

Already, a member of Socialist Alternative who is a bus driver organized with ATU 1005 showed a powerful example of what labor can do by refusing to drive police and arrested protestors to jail.

This led to similar actions in New York City and ATU International issuing a similar call. Since then over 3,500 people have joined the Union Members for #JusticeForGeorgeFloyd organizing group on Facebook to discuss similar actions. In addition, unions like the ILWU, NNU, CWA, and dozens of local unions have issued solidarity statements. Institutions like the University of Minnesota and the Minneapolis Public Schools have ended their relationships with the MPD.

To win #JusticeForGeorgeFloyd, we need mass, coordinated protests and days of action which are prepared to resist attempts by the military to suppress the demonstrations. The wider working class, and especially the labor movement, should fully mobilize its membership to these actions, and should find ways to disrupt the military’s use of our workplaces to suppress calls for justices. If last night’s violence at the hands of the military are any indication of what’s coming, with community members being shot with rubber bullets for simply standing on their porch, unions should also make immediate preparations for a one day general strike, which would enjoy widespread sympathy from the wider community and even small businesses that are already expressing solidarity with the movement.

These protests should be linked to national days of action across the country, especially in cities that are dealing with emboldened police actions to suppress non-violent protests. Already cities across the country are under similar curfews and the National Guard has been sent into Los Angeles, Atlanta, and Detroit. With nearly 40 million unemployed people, disproportionally people of color, across the country and countless examples of racist police violence everywhere, this sets up a tinderbox, especially with Trump fearing re-election defeat and looking for ways to pander to his base.

Role of the Democratic Party

The bulk of the cities where this rebellion is concentrated are run top to bottom by Democratic Party politicians, and it’s outrageous that they have resorted to fear-mongering about the protests and mobilizing the military rather than addressing the out of control police and deep inequality that flourish in their own cities.

Socialists by contrast, including the socialist leaders of the bus drivers union in Minneapolis, are showing the way, pointing to the critical role of a united, multiracial working class in fighting racism. Look at socialist Alternative Seattle City Councilmember Kshama Sawant’s speech in solidarity with #JusticeForGeorgeFloyd, where she calls for real structural reforms to policing that have teeth, taxing billionaires to build permanently affordable housing, and a green jobs program.

Unfortunately, this stands in contrast to even the left-wing figures in the Democratic Party, including Bernie Sanders and Alexandria Ocasio-Cortez, who have done little more than issue statements of support for the protests. We need more elected officials, like Kshama Sawant, who actually side with the movement when push comes to shove! This means breaking with the Democratic Party, which is tied by a million threads to billionaires, corporate interests, and the police.

We are entering into a new phase of explosive struggle. While we resist state repression against this rebellion, we can lay the seeds for a wider movement this summer and beyond. Determined direct action will be needed to stop housing evictions, Trump’s deportations, unsafe working conditions, cuts to public education and social services, and climate catastrophe. Young and working-class people are moving into action, and we should continue this fight against not only racist police killings, but also all the injustices inherent in this system of exploitation and oppression.

What happened this week in Minneapolis has clearly struck a nerve with working class and oppressed people across the globe. Protests have spread across the U.S., and in cities across the world. Capitalism is a system of brutal violence and oppression, and while the specifics may change from country to country, working class and oppressed peoples identify with George Floyd, and the movement for real justice that has sprung up. It shows the potential for international solidarity against all forms of exploitation and oppression, and against the capitalist system itself. An injury to one is an injury to all!