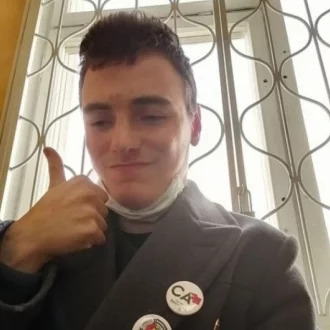 On 27th February the Nikulinsky Regional Court in Moscow took the outrageous decision to send Matvey Alexandrov to prison for 25 days — his crime according to the judge was “participation in an unsanctioned mass activity”. He and two other comrades had just been preparing to hand out leaflets at the Moscow State University calling for support for the Women’s strike on 5th March. They hadn’t even started to leaflet when the police turned up to arrest them. The two other comrades arrested face heavy fines.

The call for people to take part in the protest on 5th March — the last working day before the 8th — by organising action at workplaces, schools and universities is made by Socialist Alternative and Socialist Feminist Alternative following up last year’s successful actions on a wide range of demands including

As he was waiting to go into court Matvey sent us a message:

“Hello everyone, this is Matvey! I am sitting in the corridor of the Nikulinsky District Court, waiting for the hearing to begin. On the whole I am fine, although, of course, I had not planned to be arrested for distributing leaflets. In general, the Police station is OK, although it is rather cold in the cell, I had to hide in several blankets. For the last two days I have been sleeping and reading the paper which they kindly gave me, I’ve received a lot of food and other things passed on by supporters, thank you very much to everyone who sent them.

I have little doubt that I will be imprisoned. Well, in any case, the cell in the detention centre should be more comfortable than that in the police station. Take part in the strike on March 5, organize in workplaces and educational places to fight the repressive regime. I love everyone, I hug you all, Russia will be free, see you in a couple of weeks!”

Socialist Alternative in Russia fully supports this call. The best support that can be given to Matvey at the moment is to use his case to help build for the 5th March. Please take photographs of solidarity using the placards that can be downloaded here and send them to [email protected].