China’s National Bureau of Statistics has revealed a startling 15 percent drop in newborn babies last year compared to 2019. This follows a three-year trend in birth declines presenting a serious challenge to the modernization and superpower ambitions of the Chinese dictatorship (CCP). While many industrialized economies worldwide face aging populations, China is uniquely facing the threat of depopulation while the majority of industries still rely upon labor intensive methods.

The average number of children per woman is now far below what is needed to sustain the current population.

In an age of explosively unequal capitalism, the aging population will cause a myriad of social and economic complications. A notion now common to urban China of a “4-2-1” family structure (a singular working adult supporting two parents and four grandparents) has created potentially a catastrophic amount of pressure on working people.

The CCP has implemented several “solutions” as a result, all of which are doomed to fail precisely because of the short-term and contradictory nature of the capitalist system. Firstly, they have attempted to relax the one-child policy in favor of a “two-child policy”, while this caused a sudden jump in births after the legislative change in October 2015, the birthrate soon returned to the same decreasing trend. This is because the underlying factors determining a falling birthrate – rising living costs, longer working hours, and the exorbitant price to raise children – have been left untouched.

Recent reports estimate that the average child now costs a total of 191,000 yuan to raise from birth to age 17, with the average city kid costing around 273,200 yuan and a rural child costing 143,400 yuan. Again, this is in a country where, as Premier Li Keqiang flatly stated, “600 million people live on 1000 yuan per month”.

Furthermore, it is ironically the regime’s own strategy of capitalist industrialization, through the vast import of hundreds of millions of migrant workers to coastal provinces, that has created a “second rootless generation” robbed of their reproductive rights in practice. These workers are denied social services only available to those with an urban hukou.

As a result, it becomes almost impossibly expensive to raise children, as even public schools would charge the equivalent of private school fees for those with an “outside hukou”. 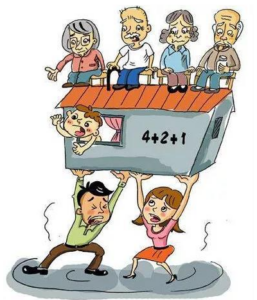 In fact, in response to an aging population and projected labor shortages, the Chinese regime is directing several efforts whose long-term effect will further decrease the birth rate. Chief among these policies is an increase in the retirement age, as part of the 14th Five-Year Plan, which aims to transition from retirement at 60 for men and 55 for women to 65 for both. In essence, the Chinese regime intends to squeeze more profits out of its shrinking labor pool, gearing up for an imperialist confrontation with the United States.

Again, it is ironic that such a policy to “adapt” to an aging population in the short term by forcing workers to work longer is likely to reduce the birth rate further. Firstly, it is expected to reduce the portion of retired grandparents who can raise a grandchild while the two parents are at work. Secondly, this is likely to increase competition in the labor market and further depress wages, thus making it even harder to afford a child. Before the pandemic, new graduates were already out of luck for higher-paying jobs, with a study in 2018 by food delivery app Meituan found that 15 percent of its drivers have at least a bachelor’s degree.

Unlike bourgeois commentators who see this only as an ironic correlation, Marxists see overexploitation of workers and mass unemployment as integrally linked. Without keeping a section of people unemployed, there is no depression of wages, no psychological terror that keeps the overexploited workers from fighting for better pay. Of course, the only benefactors of low wages and low working conditions are Chinese capitalists, who in the year 2020 alone have added 257 new billionaires.

For socialists, the problem of “population control” is unique to capitalism, which cannot fully utilize a society’s productive labor, leading to overexploitation on the one hand and under-employment on the other. However, it is clear that modern production methods are readily sufficient to create a society of abundant wealth no matter an individual’s choice to raise children or not.

Under socialism, an aging demographic would not be a problem as even a small labor force can maintain high living standards for the entire population with the wonders of modern technology if harnessed to the full through a democratic plan of production. We stand for full reproductive freedoms, for both the right to birth control and the right to have children. Ultimately, the abolition of capitalism must mean the abolition of patriarchy, fully socialized healthcare, childcare, and community laundry, cleaning and catering services. Only on this basis can we liberate all workers from recurring attacks on their living standard, along with women from the oppression of menial housework and coercive child-raising.