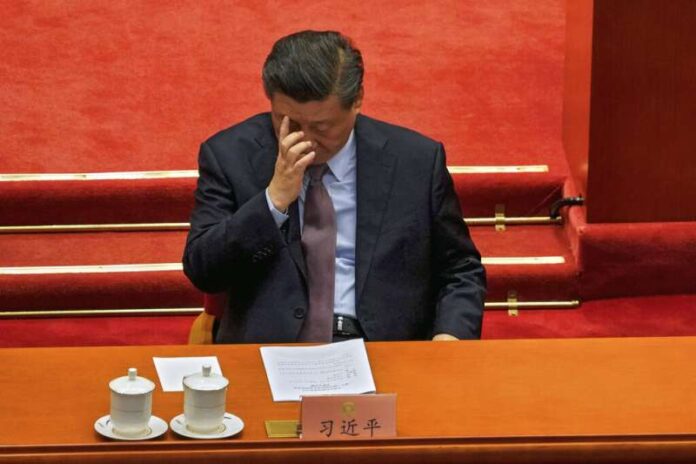 It is there Xi Jinping plans to finalise his coronation as lifetime ruler of China. The congress is a ritual, it’s not a political gathering for debates and democratic votes. This event and the ongoing power struggle inside the CCP-state which could still force Xi into some compromises, are his overriding priority. Every policy and action by Xi’s regime is in some way connected to this project – to consolidate the transition from ‘one-party’ to one-man dictatorship.

This process results not from psychological traits or ambition, not primarily at least, but from the extreme contradictions that have accumulated within the totalitarian state as the crisis of global and Chinese capitalism deepens, raising social tensions at home and sparking a coordinated economic and diplomatic offensive from Western capitalist states in the form of a new Cold War. In general, one-person dictatorships throughout history have been signs of deep crisis.

This is where China finds itself today. Xi’s rule has entered a phase of multiple and overlapping crises. Indeed, his regime triggers new crises as it acts to ‘solve’ existing ones – from Hong Kong and Taiwan, to the population crisis, to the debt crisis. The debt crisis is a good example: it continues to spread like a virus through the economy despite almost six years of “deleveraging” campaigns. When the regulators’ attention on debt problems in one sector shifts to another sector, any temporary easing of debt levels is reversed.

China’s population crisis has extremely serious implications for everything from consumption to debt levels to pensions and elderly care. The country’s population may already have peaked and begun to decline, ten years ahead of most predictions. The nightmare scenario of “growing old before getting rich”, before becoming a high-income country in other words, looks increasingly likely.

The national 10-year census numbers published in May simply don’t add up. Their release was also delayed by a month, raising suspicions the data has been doctored. As in every other policy sphere, government agencies and  media are only allowed to report “victories”. China’s population crisis, a sharply falling birth rate, shrinking labour force and rapidly aging population structure (see our fact check below), “could have a disastrous impact on the country” according to Huang Wenzheng from the Centre for China and Globalization, a pro-CCP think-tank.

Potentially, China’s looming crisis has “Japan” written all over it: A combination of an economic slowdown and a “demographic drag” which could push back or even cancel China’s long-predicted sorpasso, to overtake the United States as the world’s number one economy. China’s GDP is currently around 75 percent of the level of US GDP, measured in dollars. Japan reached a similar level in 1990, but then sank into economic crisis, long-term stagnation and “lost decades”. The US economy today is four times bigger than Japan’s.

The population crisis reveals the incapacity of the CCP-state to plan ahead, despite widespread myths on that score. Why weren’t new policies adopted much sooner? This is yet another massive failing adding fuel to the power struggles within the CCP-state, which in part reflect anxiety over ‘policy drift’ and even paralysis under Xi’s rule. In April, the People’s Bank of China (PBoC) made a highly unusual intervention for a central bank, publishing a report on population policies that urged a radical change of course. Such open criticism is a sign of power struggles in the CCP-state, with the PBoC enjoying slightly more latitude due to its economic role, while other state organs must keep silent. The bank’s report chided the government for its “wait-and-see attitude” and warned that “policy relaxations will be of little use when no one wants to have [more children].” Many commentators believe this particular horse has already bolted and fixing the stable door now won’t make any difference.

The census report, and the possible existence of undisclosed and even more shocking findings, have clearly galvanised the government into action. But its recent flurry of population policies has an aura of panic. A new 3-child policy was announced in May, followed by an even clearer measure in July, abolishing all fines (implemented since 1980) for having more children than allowed by law. But when the 3-child policy was announced, the public response was one of overwhelming scepticism and even anger that the rule change doesn’t address the real problem. In an opinion poll published by Xinhua, 93 percent of respondents said the new policy would not encourage them to have children. The poll was deleted within a few hours. One online comment summed up the popular mood: “The reason I haven’t bought three Rolls Royces is not because the government wouldn’t let me.”

Throughout the four decades since China embraced capitalism, the CCP dictatorship’s reputation as infallible economic and political managers was widely accepted especially by foreign capitalists and their institutions. Yes, a dictatorial government with a lock on all media, the banks, key economic sectors, and the world’s biggest bureaucratic police machinery unchecked by a meddling legal system, can do a number of things that other ‘lighter’ capitalist states can’t do. But they also fail, sometimes disastrously. For one this is because the regime is very often blindsided by a combination of its own censorship, false and exaggerated statistics from regions, and the fear of lower-ranking officials that speaking the truth could incur the emperor’s displeasure. Central government policies are often diluted or blocked by local governments which are highly skilled in the art of protecting their own interests.

This is how Covid-19 started and took over Wuhan, then spreading overseas, before Beijing could decide what to do. All these factors also seem to have allowed the population crisis to gestate to the point that now it’s probably too late for the government to remedy. That would require a massive level of intervention by the state to bring down house prices, raise wages and workers’ welfare protection, end the discrimination of women at work and at large, raise health spending at least to the global average (currently it is only half) and abolish all education fees at secondary and tertiary level. Such policies require revolutionary anti-capitalist change, which is the unique role and task of an organised working class movement. The CCP-state is not capable of such a policy, since it might be the first step towards it losing power.

No retreat in Hong Kong

Xi’s rule, based on concentrating ever more power in his own hands through hardline nationalistic repression, is increasingly operating in the dark, in a fog created by its own propaganda. Its policies tend to multiply existing crises (doubling down) and create new ones, aggravating social tensions to the extreme. The regime’s missteps in the new Cold War, its overconfidence in relation to the now collapsed China-EU market access agreement (CAI) for example, which has boosted Biden’s wooing of Europe, leaves the anti-Xi factions of the CCP lamenting the demise of Deng Xiaoping’s “hide and bide” diplomatic strategy (“Hide your strength, bide your time”).

Hong Kong is another clear example. Xi’s repression, the abrupt cancellation in 2014 of an earlier ‘promise’ to permit a one-person-one-vote electoral system, and the white terror that followed the end of the Umbrella Revolution in that year, massively stoked social tensions which then exploded in 2019 – over an ultimately secondary issue, the amendment to the extradition law. Xi’s policies reaped a whirlwind.

From this point onwards, as retreat is not in the Xi lexicon, the only path was to seize full and direct control of Hong Kong, abolishing its distinctions from the mainland. Making a virtue of necessity Xi has also used this takeover to show his regime’s willingness to use ruthless power in contrast to the “all bark but no bite” paralysis of the US-led Cold War camp.

Of course, the battle for Hong Kong is a one-sided one, with Beijing holding almost all the cards. This is not a reliable gauge of the balance of forces in the intensifying global contest between US and Chinese capitalism, and Xi’s regime will only make more strategic blunders if it believes this. In Taiwan and the South China Sea, the US push back will be more formidable, with the building of a network of upgraded military and diplomatic alliances to protect its imperialist interests in the region.

For the purposes of domestic propaganda, Hong Kong serves Xi well as a significant if untypical strongman ‘victory’. But this comes at a cost. The crackdown in Hong Kong has enormously complicated Beijing’s position vis-à-vis Taiwan. The chance of a negotiated resolution to the cross-strait conflict, which was never high, is now virtually non-existent (see our article Will There be a Taiwan War?).

Also, the downsides even in Hong Kong are likely to emerge after a certain time lag. The ancient Chinese military strategist Sun Tzu advised, “The best thing of all is to take the enemy’s country whole and intact; to shatter and destroy it is not so good.” But Xi and his newly emboldened underlings in Hong Kong have embarked on a rampage of arrests, bans, purges and intimidation. They are now even banning children’s books. In so doing, the CCP is “destroying” the city as hundreds of thousands emigrate or make plans to do so. At the time of writing, around one thousand Hong Kongers are leaving every day, and this is before many pandemic travel restrictions have been lifted.

Multinationals no longer look to Hong Kong to base their Asian headquarters especially since the city was kicked out of the “Economic Freedom Index” on Washington’s orders. Mainland Chinese capital and companies will come in to fill the vacuum as foreign capital successively exits from Hong Kong. Falling back on Hong Kong will also be one of the side-effects of Xi’s latest crackdown on Chinese companies, especially tech companies, blocking their plans for stock market IPOs in the US.

But a future as a Chinese financial centre is obviously not the same as a global one. Hong Kong will in future compete with Shanghai and Shenzhen, but much less with New York, London and even Singapore. This process won’t happen overnight, but the events of the past year make the long-term ‘mainlandisation’ of Hong Kong even in a financial sense an inevitability. The fate of “Asia’s world city” will therefore become a symbol for de-globalisation in the new Cold War era.

Hong Kong’s global financial role could have served the CCP regime as a useful intermediary, to circumvent and to some extent blunt the West’s anti-China protectionism and containment policies. That was the territory’s traditional role in the past. Even Mao’s non-capitalist regime allowed the British to remain in control of Hong Kong because having them there could prove “useful” – the CCP could have seized Hong Kong within 24 hours had they wanted to do so. This is what the Hong Kong Maoists discovered in 1967 when they fought to drive the British out, only to be betrayed by Beijing. This history shows the contrast in terms of diplomatic flexibility and ‘pragmatism’ between Xi’s regime and its predecessors.

Prior to the outbreak of the new Cold War, the CCP’s supposed economic superpowers hugely impressed greedy foreign governments and capitalists who flocked to China and every opportunity to mingle with top CCP officials. China’s rapid suppression of the Covid-19 outbreak – measured against the catastrophic standards of Western capitalist governments – temporarily reinforced the impression of “superiority”, which of course has also been the theme of Xi Jinping’s propaganda. But the number of overlapping crises now proliferating in China begs the question if the regime actually has a plan at all.

Demographic crisis: Legacy of the one-child policy and capitalist restoration