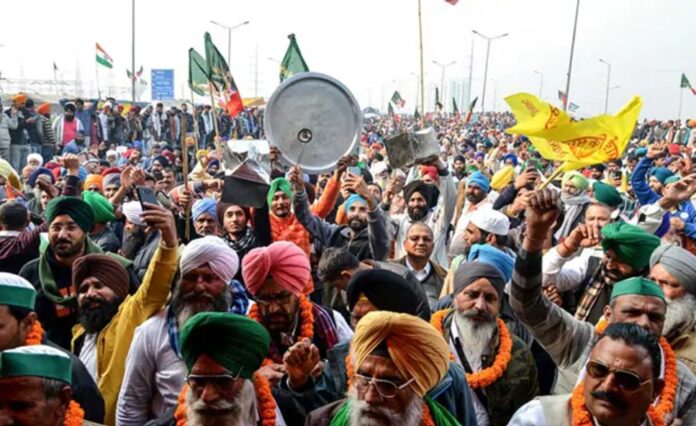 After nearly a year long protest by farmers, their largest mobilization in India in over half a century, the right-wing authoritarian government of Modi has finally caved and given in to the demands of the farmers

This momentous achievement shows the power of struggle and the effect that a large scale movement can have. At the same time there are limitations to the achievements.

This victory was hard fought, with over 750 farmers losing their lives during the course of the struggle. Their families still await justice which there is little hope for. With one of the most polarized and important State Legislative Elections around the corner, the government has tried to woo the voters, yet the adamant farmer still stands tall. The decades-long undermining of farmers’ living standards necessitates not only a cessation of attacks, but a complete reorganization of agriculture and food supply.

For months the biased right-wing-centric media houses of India bombarded the public with endless and baseless allegations through their 24/7 streaming of propaganda. The attempt of these media houses to create false narratives to deflect blame away from the government has backfired. Especially after the Republic Day events in Delhi these media houses labelled the protesting farmers as “Khalistani” (Sikh separatist) or religious extremists and tried to derail the emerging class solidarity and support from other sections of society. To their disappointment it was all in vain. In an utter display of hypocrisy these same right wing channels are now in desperation taking down video after video they had posted on Youtube. This shows the spinelessness of the media houses in India and the extent to which they have auctioned the literal soul of India’s journalism to the ruling class.

Abiding by the people’s will or opportunism for political gain?

The blatant hypocrisy is not just limited to the media but to the government as well. Many supporters of Modi have come out and heralded him as “tribune of the people” after rescinding the laws. Yet Modi remains deaf to the cries of families of those farmers who lost their life at the hands of state sponsored police violence.

It is also not to be forgotten that this victory was not given to the farmers in sympathy, it was earned by their endless sacrifices. That the BJP tries to hide this is evidence of their vulnerability. The main reason why Modi decided to withdraw the farm laws is that the Elections to Uttar Pradesh Legislative Assembly are just 3 months away and the ruling BJP is trailing in the polls. Uttar Pradesh is the most populated, and with over 80 seats in parliament, the most politically significant state of India. Elections are also scheduled in Punjab, where the BJP is traditionally very weak. The farmers movement played a major role in both states. The jury is out to decide why the government decided to withdraw these laws at this very moment.

The government underestimated and minimized the farmers a year ago and it continues to do so now. It expects the farmers to be unaware of its hidden political intentions behind this. The farmers have decided to go ahead with their planned nationwide General Strike within the next week. To the utter despair of the government, huge crowds are expected to turn up in support of the farmers, inspired by seeing the government begin to bend under political pressure. The trade unions plan nationwide demonstrations on 26 November and a two day general strike in 2022 when the federal budget is discussed. The farmers will participate in these actions. They are expected to pressure the government to accept their remaining demands such as declaring MSP (Minimum Support Price) as a legal tender and justice for the 750 farmers who died in the protest. This is expected to have a profound impact on the upcoming State Elections that are to take place in agriculture dominated states.

Future of the movement

A strength of this movement, from which many others can learn, is the determination with which the protest was carried on for months. Even in difficult moments (extreme heat, Covid19, right wing violence…), the protest continued. Even after Modi’s announcement that the three laws would be repealed, the farmers’ organizations continued to call for protest. Such perseverance in struggle is important: it shows the masses that the struggle is taken seriously. And it brings results.

Coupling this with an escalating action plan that explicitly aims to actively mobilize broader sections of the population, especially working class support, and a political program of system change, will lead to more victories. The repeal of the three laws may strengthen the announced general strike of the trade unions. It establishes the idea that struggle pays off, even against a particularly reactionary government. It shows the importance of a determined movement.

While the farmers movement tends to be centered on their own demands, the broad solidarity of the working class strengthened the protest. Conversely, the farmers’ protest inspired the general strike of December 2020. With social unrest once again on the rise, a result of Modi’s failed policies on all fronts (deadly approach to the pandemic, energy crisis, growing social problems), the key will be to strengthen this solidarity with a program of socialist social change. As long as capitalism survives and the ruling class remains in power, they will continue to oppress us.

A different world is possible, and an alternative does exist. Under a democratically planned socialist economy the farmers and other workers will be given the freedom to run the system for the betterment of all, a system based on the needs of the people. This victory by the farmers is a small, yet significant battle won in the long war against capitalism. We the workers must unite in struggle, using movements like this as possible blueprints to topple the tyranny of capitalism and liberate the masses.