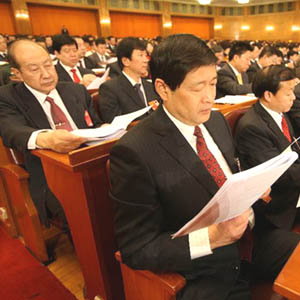 Sensational figures published in Businessweek (27 February, 2012) show that the 70 richest members of the NPC have a combined net worth of 565.8 billion yuan (US$85 billion), which is 11 times the combined $7.5 billion net worth of all 660 top officials in the three branches of the US government – the Congress, the entire US cabinet and nine Supreme Court judges.

The NPC and its twin gathering the Chinese People’s Political Consultative Conference (CPPCC) meets at the start of a crucial transition year for the Chinese dictatorship. The 18th Party Congress to be held in the autumn will cement the accession of a new leadership team headed by Xi Jinping, who is currently Vice President. Signs are emerging of a sharp power struggle between the factions of the ruling ‘communist’ party.

As China has shifted from a Stalinist bureaucratically-run planned economy to embrace a form of ‘state capitalism’, the ruling party has become a holding group of vested interests and business-based clans. One explanation for the staggering wealth of the NPC delegates is the growing presence of top industrialists and private entrepreneurs. As the official China Daily reported, “A third of the 50 richest people in China sit in the National People’s Congress” (NPC) or Political Consultative Conference (CPPCC).”

Capitalists on US visit

Zong Qinghou, chairman of the country’s biggest drinks company Hangzhou Wahaha Group and China’s second-richest person, with a family fortune of 68 billion yuan, is an NPC member. Another is Wu Yajun, chairwoman of Longfor Properties. She has family wealth of 42 billion yuan, according to the Shanghai-based Hurun Report.

NPC membership not only gives the biggest capitalists access to the government in Beijing, but also opens doors internationally. As Businessweek reported, “The third-richest person in the NPC, auto-parts magnate Lu Guanqiu, travelled with Vice President Xi Jinping to the US during his official visit this month, attending a meeting with Vice President Joseph Biden and Treasury Secretary Timothy F. Geithner.”

As the NTDTV video film below shows, Liang Wengen, the CEO of Sany Heavy Industries and China’s richest man with an estimated US$11 billion personal fortune, is widely tipped for elevation to the party’s Central Committee at the upcoming party congress. Some reports say Liang may even be given a government role as a business-friendly gesture. As the China Times wrote, “In autumn 2012, the 18th National Congress of the Communist Party may welcome a billionaire in its Central Committee, for the first time in the nation of “workers and peasants”.

“The prevalence of billionaires in the NPC shows the cosy relationship between the wealthy and the Communist Party,” said Bruce Jacobs, a professor of Asian languages and studies at Monash University in Melbourne, Australia. “In all levels of the system there seem to be local officials in cahoots with entrepreneurs, enriching themselves, and this has led to a lot of the demonstrations.”