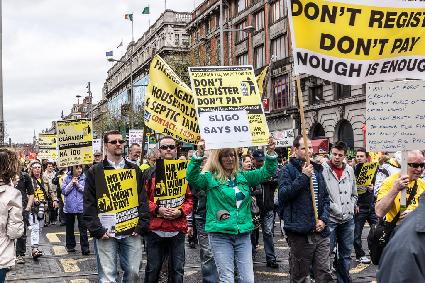 According to the government, after their three threatening letters, they plan to then summons to court those still not paying. They know hundreds of thousands will call their bluff on the letters. They fear that if there are still hundreds of thousands of non-payers next year, non payment can rise, destroying all home tax plans. With no automatic punishments or fines without court appearance, cases against non-payers this autumn therefore seems likely.

If this does happen, it will represent a very serious escalation of the attack on ordinary working class people. It amounts to nothing less than an attempt to use the brute force of the state to ram austerity down our throats, and crush any opposition. 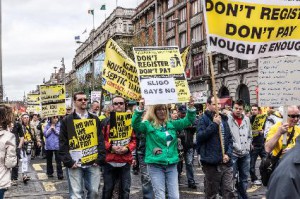 The campaign must prepare for this. Building a legal advice fund, and preparing the legal arguments are important, but there will be no justice in the courts. Loopholes and technicalities can delay and embarrass the government, but ultimately it will be our numbers, determination and militancy that will be key.

Building on the huge successes in the first half of the year, the next battle must be at an even higher level. Any decision to take even a single non-payer to court should be the spark which ignites the underlying anger and opposition to austerity and bullying.

We have seen, time and time again, events like this spur huge eruptions. In 2005, it was the jailing of the Rossport 5 that unleashed such a huge backlash of protests and unrest across the country that they had to be released. Or more recently, we have seen right across North Africa, a whole swathe of mass protests bring down tyrants which were all sparked by a few small events.

We must prepare the ground now to organise a powerful, mass response to any court cases; a response that can shut down the courts, or at least make the court cases such a nightmare for the government that they must back down.