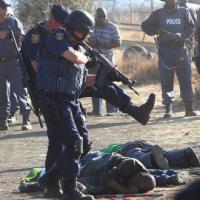 [See also statement of the DSM: For a general strike to end the Marikana massacre]

At least 46 workers were shot dead, and many more injured, on August 16 as a massive police assault was launched to crush a strike by thousands of workers at platinum miner Lonmin’s shafts in Marikana outside Rustenburg, in addition to at least six mine workers who were killed in clashes earlier on in the strike which began August 10. Two policemen and two mine security guards were also killed in the near-civil-war-like conditions. It is clear that the Lonmin bosses, backed by the entire big business elite and its servants in the ANC government, the police and army are hellbent on restoring order at any cost. The Democratic Socialist Movement (DSM – CWI in South Africa) appeals for socialists and trade unionists internationally to protest against the massacre that is now being set in motion. 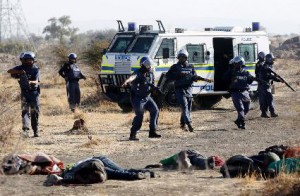 The background is that thousands of workers at Lonmin, the world’s third largest platinum producer, went on strike in demand of an increase from their current R4000 poverty wages to a R12500 living wage on August 10. The strike was initiated by workers belonging to AMCU, a break-away union from the dominant National Union of Mine workers (NUM). It appears the strike, which grew in numbers to involve tens of thousands of workers, was attacked not only by the infamously brutal mine security but also by the NUM, which attempted to force workers to break the strike. This provoked mistaken retaliations such as the torching of a car which led to the death of the two security guards on Saturday and the killing of two police officers on Monday. This has given the government an excuse to restore “law and order”, and Lonmin’s rapidly falling share price, through what is nothing less than an orchestrated massacre.

The area is under siege, with the battle clearly being prepared for in the last couple of days. Lonmin withdrew from negotiations which had been agreed for August 15 stating that the matter would now be “in the hands of the police”. No longer able to rely on containing the workers through the NUM leaders, the bosses have now resorted to brute force. By drowning this uprising in blood, the bosses may win a battle but not the war which has been brewing on Rustenburg’s platinum mines for years now. As a result of the global economic crisis, the platinum price has fallen drastically and the bosses are desperate to make the workers pay.That is why they are resolved, with the backing of the entire ruling class, not to give an inch to the bold strike launched by the Lonmin workers.

The Rustenburg region is the world’s largest platinum ore deposit and the recent closure of shafts by some mines have alerted its tens of thousands of workers to the urgent need to fight back. In doing so, increasing numbers are turning their backs on the NUM –once one of the proudest, most militant trade unions in SA but now, through backdoor deals with the bosses, investment companies and an alliance with the capitalist African National Congress-government, it is so discredited that its leaders only dare to address workers protected by guns, life guards and police armoured vehicles. Seeking a way forward, many workers have gone into AMCU, and with the NUM, backed by management, defending its turf, a tense stalemate has been established this year. 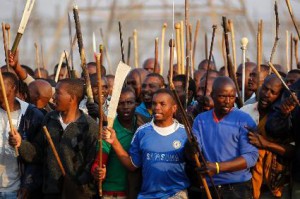 The DSM is calling on workers in both unions to demand united solidarity action, beginning with a local general strike, involving all the platinum shafts and the bitterly poor local working class communities. We also call for a national general strike to end the shooting of striking workers, and for a campaign of rolling mass action for the nationalisation of the mines under workers control and management. 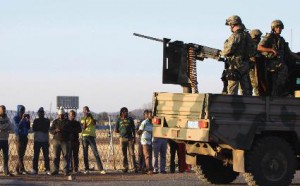 We appeal internationally to send protests to the Lonmin head office in London and to South African missions in your countries, and to picket South African embassies and consulates where possible.

Please send copies of all protests to the Democratic Socialist Movement: [email protected]

Please send copies of all protests to the Democratic Socialist Movement: [email protected]

[See also statement of the DSM: For a general strike to end the Marikana massacre]