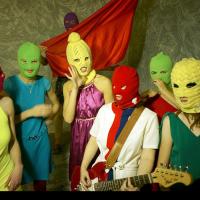 It would have been difficult to predict a year ago that a group of “third generation feminist punk rockers” calling themselves “Pussy riot” and dressed in brightly colored balaclavas and wooly stockings would not only become a symbol of the rapidly growing opposition to Putin but also the subject of his vindictive wrath. Three members of the group were arrested in February following a performance of their “punk-prayer” on the altar of Moscow’s main orthodox cathedral. They have been charged with “hooliganism” and held in jail for nearly six months awaiting trial, even though two of them are mothers with young children. They have seen neither their partners, family or friends in this time.

“Pussy riot” is more of a movement than a band. It has numerous members going under names such as “Blondie”, “Terminator”, “Garage”, “Seraphim”, “the Cat”, “Schumacher” which they interchange at will to maintain anonymity. They have dozens who support their various actions, which have ranged from satire to provocation. In the early days, members took part in actions organized by the “Voina” group such as the painting of a male organ onto one of St Petersburg’s drawbridges. When the bridge was lifted at night, those working in the offices of the FSB political police opposite found themselves staring at this pictorial comment of what many people think of their activities. But more and more, as the opposition to Putin’s regime has grown into mass public protests, the group’s actions have become more explicitly political. The words of their “Punk prayer” are explicitly anti-Putin and anti-Church hierarchy.

The performance of the “Punk prayer” in the “Cathedral of Christ the Savior” in Moscow enraged the ruling elite. Practically unanimously they have demanded firm action be taken against these women. The Cathedral itself symbolizes all that is rotten about the new capitalist Russia – built (rather rebuilt on the site of the former cathedral commemorating Russia’s victory against Napoleon) in the mid-nineties, it has been surrounded by corruption scandals. During the depths of the economic depression which followed the collapse of the Soviet Union, the Yeltsin regime wasted billions of rubles building this church. Its domes were plated with 50 kilogrammes of gold, donated by one of the new banker oligarchs with a criminal reputation. Today, only 7% of the cathedral is used for religious services, the rest is home to various commercial activities.

But this is of little concern to the Russian orthodox Church, one of the most reactionary churches in the world. Instead one after another of the ROC’s spokesmen have bent over backwards to literally demonise “Pussy riot”. According to the Church’s lawyer, “Pussy riot” represents some form of “higher power, trying to destroy the Russian Orthodox Church. These are the same forces behind the 11th September terrorist actions in the USA – Satan!”

Vsevolod Chaplin is the official spokesman of the Church. He blames, in the first place a “satanistic group”, and in second place “a world government” (in Russian history this is a synonym for a Jewish conspiracy). These groups, he explained are connected at the highest level by Satan. He believes that the punk-rockers are sinners who should be severely punished. When asked to justify this, he said he had been told “by God!”.

Chaplin is known for his reactionary and violent beliefs. Earlier this year he called for the works of Lenin and Trotsky to be checked for “extremism” and removed from circulation. He went on to say that he believed it was the moral duty of any Christian to kill as many Bolsheviks as possible. It is not surprising that the Church is often seen side by side with fascists in protests against abortion and against rights for women and the LGBT community. 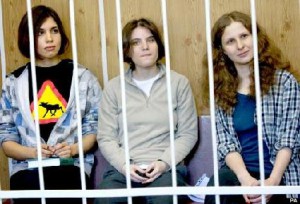 Not one of the official parliamentary parties has spoken out against this vicious campaign against “Pussy Riot”. At the start of the latest trial, Genaddy Zyuganov, leader of Russia’s so called communist party issued a press statement which: “firmly rejected this latest anti orthodox provocation”. In a radio interview he went further. He complained about the growing influence of the West and NATO and warned of the “tragic consequences of the Arab Spring for Christians”. He explained that the Communist Party “is to a large extent the representative of the Orthodox church in politics. It has always defended and will always defend the interests of believers. … We are prepared to use all our influence for the defense of the good name and authority of preachers who have to suffer ridicule, slander and defamation”.

Now that the trial of the three members of Pussy riot has been resumed, it is clear that they are not getting a fair trial. The judge keeps making comments against them, the prosecution has submitted another 200 pages of evidence without given their lawyers time to read it. Witnesses wanting to speak in support of the group are being rejected by the judge.

Somewhat disturbingly given the Stalinist use of psychiatric hospitals to punish dissidents, the judge has called for evidence from a psychiatric expert. He gave evidence that all three suffered from personality disorders, which, in one case he described as “having an active social position and desire for self-realisation” and for one of the others “a tendency to opposition activity”! Apparently hearing “voices from God” and calling for “as many Bolsheviks as possible to be killed” is not seen as having a personality disorder!

The case against “Pussy Riot” however is not an isolated case. It comes against a wave of other arrests associated with the growing protest movement. The Prosecutor’s office is moving against a number of well-known leaders such as the right wing blogger Aleksei Navalniy. The latest charges relate to the time when he was acting as advisor to the Kirov regional governor, during which he recommended a deal to sell timber from the region, which led to significant losses, if not, as the Prosecutor alleges, the misuse of large sums of money. This charge is particularly ironic as Navalny has set up a campaign against corruption called “PilRus” based on the commonly used word for corruption “to saw off money”. On these charges he faces up to ten years in prison.

But aside from the well-known cases, another 16 activists have been arrested and are awaiting trial on charges that could leave many of them in prison for several years.

But the regime is finding itself backed into a corner over these arrests. The arrest of “Pussy riot” has led to a huge international protest. Peter Gabriel, Sting, Steven Fry, Danny de Vito, Terry Gilliam and Pete Townsend are amongst those sending public protests. International groups playing concerts in Russia are more and more showing solidarity with Pussy Riot by wearing tea-shirts or giving other members of the band time to play. These include Franz Ferdinand, Beastie boys, Patti Smith, Faith No More and Red Hot Chili Peppers. Whilst many Russian artists continue to support the regime, knowing that if they speak in opposition they will lose all their air-time, it is significant that over a 100 leading artists, including many, who until recently were pro-Putin, have spoken out.

But far more worrying for the regime is that the whole population is beginning to rapidly change its approach. In the weeks after the action, the vast majority of Russian society, hearing the outright condemnation from all official quarters – even the heads of all Russian faiths, including the “Chief atheist” attacking “Pussy Riot” supported the government’s actions against the group. The latest opinion poll, however show that a majority of Muscovites already think that the regime has gone too far. This is in line with other polls that show that up to 20% of Russians (that’s about 30 million people) are prepared to actively protest against the government.

The CWI in Russia calls for the immediate release of Pussy Riot and all those arrested around the recent opposition protests and for all charges to be dropped. There should be the immediate separation of the Russian orthodox church from the state at all levels. Genuine freedom of speech including the right to criticize the state, the President and the church should be established at all levels. The Putin regime should go with the convening of a democratic constituent assembly made up of representatives from the workplaces, educational institutes and residential areas to decide what forms of government are best for Russia. There should be established a mass workers’ party with a socialist programme prepared to fight for political power and establish a new, socialist society free from capitalism and the bureaucrats and priests who serve its interests.