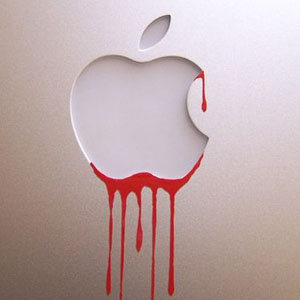 Wages make up just 2-5 percent of the iPhone’s sale price, while Apple’s profit is 57 percent of every iPhone sold. Keep these figures in mind when reading about the latest flare-up at Foxconn, which is a major manufacturer of Apple products including the new iPhone 5.

Security guards are being blamed for triggering the mass riot at Foxconn’s huge factory in Shanxi province in northern China at the weekend – another example of the explosive tensions accumulating among super-exploited Chinese workers in gigantic prison-like sweatshops such as those run by Foxconn.

Up to 2,000 workers were reportedly involved at the height of the unrest, with 40 people sent to hospital, as violent clashes continued for several hours from Sunday evening until Monday morning. News reports say that 5,000 police were called to the plant to restore order. According to Xinhua at least three of the injured are in serious condition. There are even reports of fatalities in some foreign media but this has been denied by Foxconn.

Foxconn Technology Group is a major manufacturer of branded electronics products such as Apple’s iPhone, but the company also supplies products for Dell, Sony, Nokia and Microsoft. The Taiwan-owned company is China’s largest exporter, employing 1.1 million workers in the country, and has a reputation for labour abuses, safety violations, and brutal military-style management methods.

Foxconn has long been tainted by scandals especially since a spate of worker suicides at its massive Shenzhen plants that became world news in 2010. Since then the company has shifted much production to inland regions such as Shanxi, Sichuan and Henan, where wages are lower and it has been courted by local governments. But new scandals have erupted including the coercion of student labour to work as Foxconn ‘interns’. A strike at one Foxconn plant in June led to the dismissal of all the workers involved.

The Shanxi Foxconn plant, located in Taiyuan City, employs 79,000 workers. Workers told news agencies that the riot first started as a fight between a few security guards and workers. The company’s security guards, like the many ex-military personnel among its supervisory staff, have a reputation for strictness and aggression toward assembly-line workers. The weekend’s eruption of anger should therefore come as no surprise. Many commentators are predicting more riots at Foxconn factories and similar sweatshops in China.

“Such riots have become in some ways inevitable,” says labour advocate Liu Kaiming in Shenzhen. “It’s no longer simply a matter of raising the wages.”

A report by several Chinese and Taiwanese universities published last October showed that nearly 28 percent of Foxconn workers have been verbally insulted by supervisors or security personnel, and 16 percent have suffered physical abuse. “Workers aren’t allowed to talk, smile, sit down, walk around or move unnecessarily during their long working hours, which require them to finish 20,000 products every day,” this report stated.

The pent up anger of Taiyuan workers against this routine mistreatment exploded on Sunday night. A relatively trivial altercation between guards and workers returning to their dormitories seems to have set off the riot, which soon spread, with workers attacking police cars, metal gates and shop windows within the factory compound. Microblog postings stated that “factory guards had beaten workers and that sparked the melee”

A worker told the South China Morning Post “Thousands of angry workers searched and beat up every security guard they saw.”

A report by Xinhua claimed that regional rivalries – between workers from Shandong and Henan provinces – may have played a part in the clashes. The roll out of Apple’s iPhone 5 has led to the transfer of workers from some of Foxconn’s other manufacturing facilities to the Taiyuan plant. Especially given the absence of genuine workers’ unions, which are outlawed in China, regional rivalries can become a serious problem in the workplace. But it is also possible the Xinhua report is innacurate or reflects an attempt by the state media to steer blame away from Foxconn and its hardline methods.

Most workers at Foxconn and throughout manufacturing industry are migrants on temporary contracts. Managements practise segregation and workers are often forced to band together with others from the same home province in order to pursue grievances. The absence of unions and repression against workers who attempt to organise, means there is no organised force to unify workers on a class basis.

The mass unrest at Foxconn is symptomatic of wider tensions in China and especially within industry. The massive rich-poor divide and a sharp economic slowdown have resulted in a ‘pressure cooker society’. The Taiyuan riot comes just weeks before the ‘communist’ dictatorship changes its top leadership. What happened at Foxconn on Sunday could happen across China in the period ahead, something that magnifies the problems of the one-party regime which is more divided and factionalised than at any time for at least two decades.

The China Beige Book, a survey of economic trends produced by a government think tank, found one-fifth of surveyed companies were cutting staff, an increase from 13 percent in the previous quarter. The survey showed that 5 percent of companies reported strikes. Many of the strikes this year are related to the economic slowdown with workers demanding payment of overdue wages from failing companies, or pressing for compensation when factories in coastal provinces relocate to interior cities where labour is cheaper. 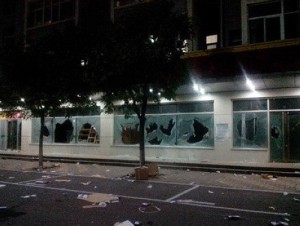 “Because of the launch of the iPhone 5, the workload of workers [at Foxconn] suddenly surges,” said Hong Kong-based Students & Scholars Against Corporate Misbehaviour (SACOM), in a report earlier this month. There is quite probably, therefore, a connection between the Taiyuan riot and the launch of the new iPhone 5. SACOM report widespread abuses at Foxconn factories, which continue despite claims by Apple and other corporate clients to have remedied these problems. These include excessive overtime working – well above that permitted by Chinese law – unpaid overtime and exposure to toxic substances. The working day at Foxconn plants regularly extends to three hours of overtime work. The work is intense due to its intricate nature and rapid technological change, which continually introduces new models and components. SACOM’s report says some employees interviewed at Foxconn’s factory in Zhengzhou had not had a day off in 30 days!

Nor has the problem of conscript labour been eradicated. The Shanghai Daily recently reported “Thousands of students in an east China city are being forced to work at a Foxconn plant after classes were suspended at the beginning of the new semester.” The students “were driven to a factory … after the plant couldn’t find sufficient workers for the production of Apple’s much-anticipated iPhone 5.”

Foxconn is emblematic of globalised capitalism, with global brand companies outsourcing production to non-union sweatshops and then disclaiming responsibility for the inevitable abuses that occur. This model, and Foxconn’s militarised production methods, has helped Apple become the most valuable company in stock market history. Last month the company reached a ‘market-cap’ (the total value of its shares) of over US$620 billion. The late Steve Jobs, former CEO of Apple, famously said of Foxconn after its suicide scandals, “It is not a sweatshop. You go in this place and it’s a factory but, my gosh, they’ve got restaurants and movie theaters and hospitals and swimming pools. For a factory, it’s pretty nice.”

This rosy perspective is sharply at odds with the view of Wang Zhiqian, a Foxconn recruiter. “It’s definitely not a happy place,” he told the Washington Post (26 September 2012). “It’s not about the money… It’s a problem of management. It’s a mess. The guards often abuse their power over the workers. We [Foxconn] attract many fewer workers now than in 2010. People would rather work at a hotel or other places. It’s not a lack of workers in these areas – it’s a problem of spiritual emptiness.”

The riot at Foxconn’s Taiyuan plant, coming just weeks after the launch of the iPhone 5, sums up the brutality of modern capitalism and the ways in which labour is exploited for the super-profits of big corporations.

We oppose any police action or victimisation by the company against workers accused of involvement in the riot at Taiyuan – there must be an independent investigation of this incident involving elected representatives of Foxconn’s workforce and the international trade union movement.

Foxconn’s security apparatus should be disbanded, with security duties performed instead by regular workers on an elected and rotational basis.

Socialists and the chinaworker.info website call for Foxconn and the global technology giants it serves (which are actually just links in one huge production chain) to be taken into public ownership under the democratic control and management of the working class. This demand, which would open the way to ending today’s inhuman production methods, guaranteeing decent wages and working conditions, needs to be taken up in China, Taiwan and internationally as part of the wider struggle for workers’ rights and socialism.