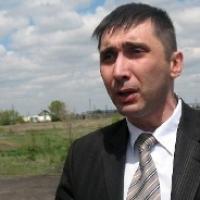 All pretense of a fair trial dropped – Protest Now!

On the second attempt the authorities, Vadim Kuramshin, a well-known campaigner for prisoners’ rights and member of the Socialist Movement Kazakhstan, wsa jailed last weekend, for 12 years.

The charge against Vadim – that he allegedly attempted to extort money from Mukhtar Uderbaev, from the Kordai regional prosecutor’s office – was clearly a fabrication.

Vadim was charged with extortion. He was first arrested on 24 January 2012, as he was about to hold a press conference at which details were to be given of the corruption of members of the Prosecutors’ office. But Vadim was arrested after the Deputy Prosecutor alleged Vadim had attempted to extort a large bribe from him.

Vadim, his lawyers and supporters have always been convinced that the charge of extortion is no more than a provocation by the country’s political police – the KNB – as a means of physically removing Vadim from the struggle for justice. They want to ‘neutralize’ Vadim, one of the country’s most effective human rights’ campaigners, by using this absurd accusation to jail him for many years.

At the end of August, a jury found Vadim not guilty of the extortion charge and he was freed. However the Kazakhstan authorities were out to seek revenge on this fighter against corruption. Vadim was again arrested and dragged before the court. This so angered members of the previous trial jury that they have formed their own ‘action committee’ in defense of Vadim.

Under the lead of Judge Nurmukhammat Abidov, the latest trial was rushed through and the sentence declared without either Vadim or his advocate present in the courtroom. They were replaced by a court-appointed lawyer, who just acted as if he were an additional piece of court room furniture.

Please sends urgent protests at this vindictive jailing of Vadim Kuramshin and demand his immediate release to the Kazakh embassy of your country, as well as to the General Prosecutor of Kazakhstan: [email protected]