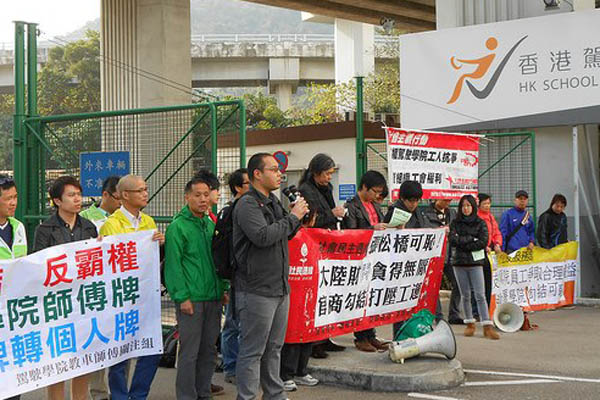 Three driving instructors, two of whom have been sacked, from Hong Kong School of Motoring (HKSM), started a hunger strike on 21 January in protest at the company’s brutal union busting methods. The company is the largest driving school in the territory, employing over 300 instructors. More than 90 employees signed up to join a union and for several months have been trying to get the union recognized by the company. On 10 January, the company sacked two workers, a member of the union registration committee and another union member, solely on the basis of their union affiliation. The company continues to refuse union rights, and hopes its harsh stand will deter others from demanding their legal right to join and form a union.

One of the HKSM hunger strikers have been hospitalized on two occasions since starting their desperate protest to draw attention to this injustice. Hong Kong is a capitalists’ paradise, but while unions are legal, the right to collective bargaining was abolished following the handover to Chinese rule in 1997 and legal protection of workers’ rights is lacking in many key areas including standardized working hours. On Monday 28 January as the hunger strike entered its second week, around 30 supporters, students and social activists, joined a two-hour blockade by a dozen or so driving instructors at the company’s teaching centre in Sha Tin. This action got significant media publicity, and raised morale for the strikers. Socialist Action (CWI supporters) have been active in supporting this struggle, and helped arrange for a hunger striker to speak at last weekend’s pro-democracy demonstration, which gathered around 2,000 marchers.

HKSM is owned by Cross Harbour Holdings, which also has a controlling share in privatised road tunnels that are deeply unpopular in Hong Kong for their extortionate toll charges. The company chairman is mainland Chinese tycoon Cheung Chung Kiu, worth 1.4 billion US dollars according to Forbes list of ‘World’s Billionaires’. Cheung and his companies have featured as examples of government-business cronyism in recent years. Former Hong Kong leader Donald Tsang Yam-kuen was last year embroiled in a corruption scandal after revelations of his close friendship with a number of tycoons, including Cheung, who flew Tsang to a Thai holiday resort on his private jet. It just so happens that the tender for selling out the cross-harbour tunnel was awarded (to Cheung’s company) under Tsang’s administration. From Donald Tsang’s administration to the current CY Leung administration, the government refuses to return the tunnel to public ownership despite huge public pressure and anger.

The hunger strikers have erected a campsite inside the Immigration Tower in Wan Chai, near the office of the Department of Transport, which is responsible for regulating HKSM. This struggle is important for the wider working class and also for all who are seriously fighting for democratic rights – for without union rights, the right to strike and to organise, and without free speech in the workplace, any talk of democratic rights is a fiction. We are appealing to unionists and socialists internationally to send protest letters – supporting the basic right to form a trade union – to HKSM and Hong Kong’s Department of Transport. The model protest letter below can be copied and pasted into your emails and sent to the following addresses. 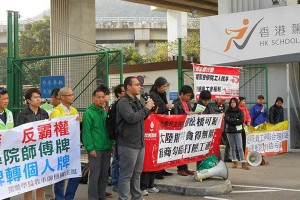