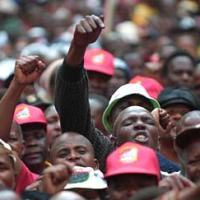 Having already reported here on the important launch of the Workers’ and Socialist Party, a new party for the mass of South African workers, initiated by mineworkers’ strike committees, and the Democratic Socialist Movement (CWI in South Africa), we publish below a media report on the launch of the party, originally carried here

THE official establishment of a leftist political party, sprung from the unrest in the mining sector, is gaining momentum as its founders prepare to register it with the Independent Electoral Commission (IEC) ahead of its inaugural conference in March, their leader Mametlwe Sebei said on Tuesday.

The labour unrest in the mining sector provided a platform for the Democratic Socialist Movement, reconstituted in 2002, to mobilise mineworkers and poor communities into forming the Workers and Socialist Party (WASP) last month. Aside from representing workers in the continuing unrest, the Democratic Socialist Movement was mobilising support for its idea to set up a political alternative to the African National Congress-led ruling alliance.

Steven Friedman, director of the Centre for the Study of Democracy, said the fact that the party was emerging from an industrial conflict was an “important plus” in building a strong movement.

But such strength would not be automatic, as the party would have to work hard if it was to have any effect.

Mr Sebei said its first gathering on December 20 consisted of just 20 representatives from mines and communities in North West, Limpopo and Gauteng, but the party was now fanning out and mobilising members ahead of its March 21 inaugural conference.

In two weeks’ time it is set to meet with grassroots organisations that have “agreed in principle” to be part of the initiative. Mr Sebei would not name them but said these included independent unions and community organisations.

“It is a socialist programme … we will be calling for the nationalisation of the mines, the banks and the commanding heights of the economy,” he said. “Our main support base is in the strike committees.”

Mr Friedman said there definitely is room for the expression of worker interests outside the alliance between the ANC, the Congress of South African Trade Unions and the South African Communist Party (SACP). But he remained sceptical about the party’s prospects.

“Is there a constituency? Yes, in the abstract … and that begs a whole lot of other questions. Does it have the organisational capacity? Can it be anything more than a locally based party?” Mr Friedman asked.

Mr Sebei said WASP “militants” were going out to communities across the county to obtain a million signatures in order for the party to contest next year’s elections.

“The WASP will be a fighting party that will unite service delivery protests, student struggles and workplace struggles,” he said.

The IEC’s Kate Bapela said the party had not yet been registered. At national level, the IEC required 500 signatures of registered voters who supported the founding of a new party and a fee of R500.

SACP second deputy general secretary Solly Mapaila brushed off the prospect of the party presenting any threat, saying it would “dissipate” as quickly as it was formed.

“It is not an easy terrain which we operate in … Those workers will realise that they (the WASP) are not their true representatives,” he said.