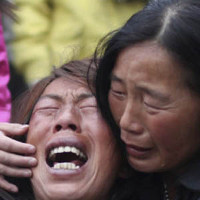 121 killed in one of China’s worst workplace disasters 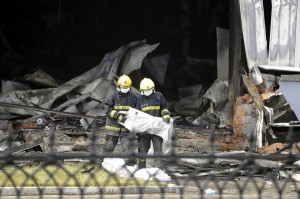 The term ‘slaughterhouse’ has acquired a terrible new meaning after the inferno that engulfed the Jilin Baoyuanfeng poultry plant on Monday 3 June. The blaze, which consumed the main workshop in just minutes, caused appalling loss of life even by the standards of China’s shocking industrial safety record. At least 121 workers died and 77 were injured. Grief-stricken relatives have rightly vented their anger at the company bosses, government officials and the riot police who later descended upon the scene.

“We’re now seeing hundreds of police mobilised within a day to deal with people like us, but what if they could spend a fraction of that cost on workplace safety?” a local resident told the South China Morning Post.

Safety routines at the plant in Dehui, around 100 kilometers from Changchun, provincial capital of Jilin, were a “total mess” according to government inspectors. The big question is why such judgments always come too late – after lives have been lost? Two company executives have been detained by police. But even if stiff punishment awaits them this does nothing to prevent similar disasters in the future.

This was a “man made tragedy” said Yao Chunxue, who lost a niece in the blaze. The fire seems to have been caused by one or more explosions in ammonia tanks that are used for the plant’s refrigeration systems. The flames spread rapidly according to survivors and the lights went out. The main reason the death toll was so high is that workers were imprisoned inside the burning building, with most doors locked from the outside by management. 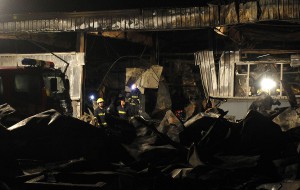 “I’ll never forget the workers banging the metal doors from inside and yelling for help and then the banging gradually dying out,” a survivor said.

The causes of this disaster are not hard to find. The list includes inhuman and illegal labour practises, a total lack of safety equipment and training, and government officials that for the right price will turn a blind eye. The lack of real workers’ unions to fight for elementary safety routines and to protect workers’ rights is the biggest single factor making many Chinese factories potential death traps.

A catalogue of crimes

Only one third of the roughly 300 workers at the Dehui plant escaped from this disaster. The following facts show why:

• Five of six doors in the processing workshop were locked from the outside in a clear violation of safety regulations. This was standard practise at the Baoyuanfeng plant to prevent workers taking ‘unauthorised breaks’.

• There were no fire exits at the Baoyuanfeng plant.

• Workers had never received any instructions in fire safety, according to a worker surnamed Feng who has worked at the plant for three years.

• Local fire safety officials inspected the slaughterhouse just three days before the blaze – yet no measures were taken to deal with the obvious safety hazards.

Chinese workers face super-exploitation, low wages and long work hours, while bosses enjoy the protection of a repressive authoritarian state that puts GDP before all else. 90 percent of the victims were women recruited to work part-time at the slaughterhouse from nearby farming villages. The “pay was lousy” according to locals. 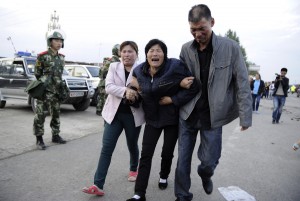 The Dehui disaster has become a political issue, with the local organs of the CCP-state cracking down on any large gatherings of relatives and other residents. The burned-out plant has been cordoned off by police to block relatives congregating in the area. The authorities fear unauthorised assemblies that pose a threat to ‘stability’.

According to the South China Morning Post angry locals blocked traffic and scuffled with police on Tuesday 4 June, one day after the blaze. The newspaper said a crowd of 1,000 people mobbed a local government convoy on 3 June. Some relatives complained of police brutality. A 36 year-old who went to the site seeking information about his wife said riot police beat him up and detained him for several hours.

A furious online discussion has surfaced in the wake of the tragedy. Netizens have criticized president Xi Jinping for not cancelling his visit to the United States and Latin America to return home like “other national leaders”.

The Jilin disaster highlights China’s shocking work safety record. Around 70,000 people are killed on the job each year in the ‘sweatshop of the world’. Official data shows an improvement in industrial accident rates, down 33 percent over the past five years, but this is still unacceptably high. Meanwhile, the incidence of fires at agricultural production plants are up 8 percent over the same period. As even the pro-business South China Morning Post admits, “Rules are widely flouted in the competitive sector in the rush for contracts and profits.”

Conditions are similar to the sweatshops in other low wage economies like Bangladesh, where more than 1,100 textile workers were killed when the Rana Plaza factory building in Dhaka collapsed on April 26.

There is a link between the widespread violation of workplace safety laws and China’s litany of food safety scandals, from leather and melamine tainted milk to cadmium-poisoned rice. These are all symptoms of an insane system where making money overshadows all other considerations.

Such greed and recklessness does not as some claim arise out of ‘human nature’; nor does it represent a rational way to run the economy. On the day of the Baoyuanfeng blaze, hospitals in the provincial capital Changchun reported ten times the normal number of blood donors as local people volunteered in the wake of the disaster. Such acts of spontaneous solidarity show the real face of human nature in contrast to the mean spirited nature of the capitalists and their authoritarian protectors.

In order to make China’s factories and workplaces safe, independent and democratically-controlled workers’ unions are needed. A real union is as different from the dictatorship’s fake unions as safe food and drink differs from China’s mountain of toxic imitations. With workers able to elect their own representatives, carry out independent safety inspections, enforce factory laws, and stand up to management abuses, this would change the balance of power in the workplace.

Compare the mining industry in China, where independent unions are outlawed, and the same industry in South Africa, a poorer country but where workers have established their own unions. The raw data shows that union organisation is a life and death question. The number of fatalities in South African mines dropped from 774 in 1984 to 128 in 2010. In China, almost as many mineworkers are killed every fortnight (around 50 lives lost per week) as in a whole year in South Africa. 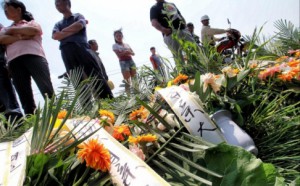 Socialists and the chinaworker.info website send our condolences to the relatives and survivors of the Dehui tragedy. We warn that no official investigation can be trusted to deal with the real causes of this disaster, which are rooted in the greed of the capitalists and their disregard for workers’ lives thanks to a web of government-business collusion. Only mass struggle for democratic rights and independent workers’ organisations can bring about real change. This struggle must inevitably challenge the dictatorship of the CCP and the moneyed elite.