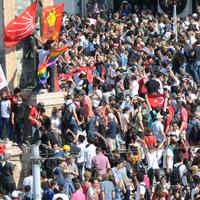 Public sector workers take strike action against police violence – For a one day general strike as a next step to bring down the government!

[Update: DISK, the Confederation of Revolutionary Trade Unions of Turkey, a trade union federation with around 350,000 members, calls now also for a strike tomorrow, Wednesday, 5 June, in protest against the police violence]

KESK, Turkey’s Confederation of Public Workers’ Unions, announced a national strike against police violence for today (4 June 2013) and on Wednesday. Hundreds of thousands are expected to come to the demonstrations. Yet the police continue to use tear gas and to violently attack demonstrators.

The ongoing police brutality, first seen in Gezi Park, on Taksim Square in Istanbul, shows again the arrogance and arbitrary police violence that the AKP (Justice and Development Party) government rests on. Hundreds were injured, some seriously. In the course of the mass movement, two demonstrators were killed.

The policies in Gezi Park were the spark that triggered an explosion. Now the anger, built up over years, has become visible. It is not only in Istanbul that protests are taking place. Hundreds of thousands are taking to the streets all over Turkey, in Ankara, in Inzmir and in Bodrum. In total, it is reported that mass demonstrations have taken place in 67 cities. There are even reports of divisions within the state apparatus, with military personnel distributing gas masks and some police officers supporting demonstrators.

The potential exists to develop a movement that challenges the Turkish capitalist elite.

This is a turning point. The AKP government, confronted with a sharp fall in economic growth rates this year, is now significantly challenged by a mass movement. The rise of the AKP over the last decade or so was based on several factors. This included the masses’ frustration with powerful Kemalist forces, a deep economic crisis at the beginning of the century, the alienation of many people towards the state bureaucracy and the history of interventions by the army in political life, including brutal coups. The AKP’s was able to present itself as a ‘moderate’ Islamic ‘alternative’ to the old establishment and pursued some populist social policies. But the events of the last days have shaken the rule of the AKP and Erdogan.

The mass movement was initially dominated by frustrated lower segments of the middle classes. They were quickly joined by youth from working class suburbs. Now there is an increasing involvement of the organised workers’ movement (though this is still in its early stages). All this points towards ever increasing sections of society moving into mass action. This may be a harbinger of even greater mass struggles, moving towards a pre or revolutionary situation. Splits at the top of the regime, within Erdogan’s party, are also starting to emerge.

The Turkish movement and courage of the protesters has been sympathetically welcomed by working people and youth everywhere. The right wing Turkish regime, a NATO ally with its own ambitions to become a regional power, is challenged by an uprising of anger and opposition. The nightmare of the increasingly sectarian civil war in Syria, which sees imperialist and local powers meddling, and its dangerous spilling over into the whole region, had appeared to threaten all the achievements of the ‘Arab Spring’ – peoples’ uprisings against dictators and for social change. The Turkish regime cynically intervened in the Syrian conflict early on, to try to capitalise for its own interests. But now the start of a potential “Turkish Summer” is offering new hope to re-vitalise the movements from below across the region, encouraging a potential renewal of mass struggle for democratic rights, as well as the need to bring about fundamental change in the interests of the working masses.

It started with protests by environmentalists against the cutting down of trees to allow developers, who are close to Prime Minister Erdogan, to build another shopping mall in the centre of Istanbul. With the full force of police violence, they tried to force this development through to bolster profits for the few. In the eyes of millions, this summarised the programme of the neo-liberal AKP government.

“Tayyip istifa” – “Erdogan resign” became the uniifying slogan of the movement. Sections of the CHP (Republican People’s Party), the main pro-capitalist opposition, and even the fascist, MHP, have tried to also capitalise from the movement. So far, the radical character of the mass movement has not allowed the CHP to dominate.

However, within the movement a debate is essential on the way forward. How can a political mass force be built serving the interests of workers, young people and poor people that is able to bring down the Erdogan government and offer an alternative? This movement cannot have anything in common with the old CHP elite. A new force is necessary, unifying workers and youth. Therefore a political programme is needed that puts democratic rights and the struggle for jobs, decent housing, higher wages and social security to the fore; a socialist programme that does not shy away from challenging the interests of the capitalist elites and multinational companies.
Stop the AKP government’s violation of rights!

Enough is enough! The government has long violated democratic rights, the rights of workers, trade unions and minorities. The violence in Gezi Park was only the tip of the iceberg. Around 8,000 trade union and Left activists, journalists and Kurdish politicians are imprisoned. And Turkish media broadcast – supposedly on Erdogan’s orders – TV cooking shows while the people try to find out through foreign media and the internet what is going on in their country!

The government is also attacking workers in the public sector. It plans to end their job securities, to cut jobs and to reduce wages. The main public sector union, KESK, had already planned for strike action on these issues (with a date for action to be set) before the mass protests started.

At the same time, large-scale privatisations are being forced through by the Erdogan government. Corruption and cronyism, and the enrichment of a few, dominate society.

‘Divide and rule’
The wing of Turkish bosses and international corporations that are close to Erdogan were allowed to enrich themselves for years. The politics of privatisations and neo-liberal attacks and the repression of protests serve the enrichment of a few. In response, we need the united resistance of working people, the youth and the poor.

To be able to implement these policies, the AKP tries to present itself as defending Islamist values. This is what is driving its divisive measures, such as further extending the areas where alcohol cannot be legally sold and sanctioning against people kissing in public. With these measures and more, the AKP tries to organise support amongst more conservative parts of the population. This is an attempt to cover the government’s real policies and attacks. This is absolutely cynical.

By re-starting the debate on building a mosque on Taksim Square, Erdogan now attempts to start a provocation against secular-oriented people. Erdogan’s government seeks the polarisation of the population along religious and ethnic lines. Last week, it was announced that a third bridge over the Bosporus will be named after Sultan Selim I, a mass murderer of the Alevites’ minority in Turkey some 500 years ago. These provocations and the paternalism by the State regarding the forms of personal and cultural expression must be stopped immediately.

Erdogan has made veiled threats to mobilise conservative layers of the population onto the streets, to counter the protest movement. He points to his parliamentary majority and believes the AKP can draw on substantial support in society. The mass movement needs to advocate policies that can win over the rural masses and urban poor, to cut across government attempts at divide and rule. Workers and youth cannot allow themselves to be divided as they resist neo-liberal attacks and struggle for well-paid work, decent housing for all and for full democratic rights.

Tasks for the workers’ movement and the Left

The call by the public sector union KESK for a national strike against police violence is the right decision. The other trade unions should follow this example and extend the strike. A one day general strike across Turkey can be the next step to develop the mass movement and to develop the strongest force possible against Erdogan – the organised workers’ movement – to the centre of the protests.

Trade unions and Left parties and groups, like HDK (People’s Democratic Congress – an umbrella party, including Kurdish parties and Left groups), Halk Evleri (People’s Houses) and others, can contribute, on all levels, to turn this into a strike that sees maximum participation by workers, youth and communities; committees based on mass assemblies in factories and neighbourhoods are necessary to defend them from police brutality, to organise solidarity for a successful strike, and to encourage political debates, on all levels. Bringing together elected representatives of these assemblies locally, in the cities and regions, as well as on a national level, can build the movement in a democratic way, with full accountability and the right to recall all representatives. This can be the basis for a government of workers and the poor.