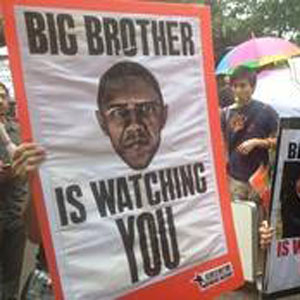 As many as 1,000 protesters turned out on 15 June for a demonstration in support of Edward Snowden who fled to Hong Kong last month after leaking details to the media of US government hacking of internet and phone accounts on a massive scale. In driving rain, protestors shouted “Defend Free Speech”, “Protect Snowden”, and “No Extradition”. Socialist Action, the supporters of the Committee for a Workers’ International (CWI) in Hong Kong, were one of 19 groups who organised the demonstration. Below is the text of our leaflet distributed at the protest in English and Chinese.

Sally Tang Mei-ching of Socialist Action was the first speaker at the demonstration and is interviewed (below) in two video reports, by the London Guardian and by Swedish Television.

Edward Snowden, the former CIA contractor, became a whistleblower and fled to Hong Kong. He has revealed that the US state engages in mass-scale monitoring of ordinary people’s phone calls and internet. In Hong Kong this includes those of public officials, businesses, a university and students, threatening people’s privacy on a gigantic scale. The US National Security Agency (NSA) admits it collected 97 billion pieces of data in March 2013.

Among other things, Snowden has revealed how the US ‘Prism’ program operated by NSA harvests information from private online accounts in the US but also overseas. This has also exposed the roles of tech companies Google, Facebook, Skype, PalTalk, Microsoft, Apple and Yahoo, who cooperate with the Prism program. The Snowden affair has led to a global scandal for the US government which regularly accuses China’s dictatorial government for using similar undemocratic methods against its people. Snowden warns the ‘FBI is trying to bully Hong Kong to extradite him’. The FBI (Federal Bureau of Investigation) said yesterday it had launched a criminal investigation and was taking “all necessary steps” to prosecute Snowden for exposing secret US surveillance programmes.

As a puppet of the Chinese Communist Party (CCP), Hong Kong’s Chief Executive CY Leung is still waiting for orders from the Beijing government. Beijing will make the final decision if it will extradite Snowden, which will be based not on ‘human rights’ or respecting free speech but on geopolitical interests and extracting political gain. While Snowden’s revelations represent political capital that the Chinese government can exploit in order to put pressure on the US government, especially now when China-US tensions are sharpening, Beijing is also looking for ways to reduce US pressure (on trade, the currency war, and Obama’s military ‘pivot’ to block China in Asia). The Chinese state also fears that its own monitoring systems will be exposed if they go too far on this issue.

Wikileaks revealed secret documents of the US government in 2010, including the crimes committed by US troops in Iraq and Afghanistan. The US government is persecuting the founder of Wikileaks, Assange, by all means. Until now, Assange is forced to stay in the Ecuadorian embassy in Britain. Bradley Manning who released over 700,000 secret US documents has already spent nearly 3 years in detention awaiting trial. While in custody, he has been tortured and degraded. This shows that the US which purports to stand for ‘human rights’ has the same attitude as the Chinese dictatorship towards freedom of speech when it comes to defending the interests of the ruling elite. As Philip Cunningham wrote in the South China Morning Post (June 5), “The US and China are not only increasingly on a par in terms of economic power, but are also coming to resemble one another more in terms of spin power and information control when it comes to the question of where the truth lies.”

The US government claims to protect democratic rights around the world. In reality its primary concern is the profit of its corporations. Besides, the US government has passed laws to restrict internet freedom in past years, which have triggered mass protests. The Snowden case shows how ‘democracy’ is just a political weapon the US uses to put pressure on the Chinese dictatorship for its own capitalist interests. Democratic rights and freedom from state surveillance and repression are won by mass struggle, not handed out by elites or imperialist governments.

Benny Tai, the advocator of Occupy Central to fight for democracy in Hong Kong, said the democracy in Hong Kong should follow the ‘western standard’. Edward Snowden’s case ironically shows that US society is controlled undemocratically by the 1% of the ruling class. Under capitalism, democratic rights are continuously being eroded and threatened unless the mass of people persistently defend these rights. Socialist Action supports the struggle for full democratic rights and we warn this will be resisted by the capitalist elite, which is why we need a new system of genuine socialism.