Following the launch of the WASP the work is ongoing to, on the one hand, complete the formal registration of the party and, on the other, sink its roots and establish its structures across South Africa.

The main focus is now on a campaign for real jobs, real wages and decent working conditions for the hundreds of thousands of workers who are exploited at ‘volunteers’ in the public sector, linked to the struggle for the most basic public services such as electricity and housing in working class areas, as well as the mineworkers’ demands for a living wage and against shaft closures.

Democratic Socialist Movement (DSM – the CWI in South Africa) and mineworker activists are building WASP through such protests in for example the mining communities outside Johannesburg and in Limpopo. On May Day, WASP is holding a rally in Carletonville, the gold mining town south of Johannesburg, aimed at tying all these campaigns to the need for nationalisation, under democratic control by workers and their communities, of the mining industry.

In a sea of mass unemployment, the ANC-government is using the most desperate in various ventures such as the Community Work Programme (CWP) and Home Based Care, where they work, for as little as R500 per month (US-$ 54) in some cases. These workers carry out extremely important work – e.g. street maintenance, adult education, basic health care for the most needy – which should be at the core of the public sector responsibilities. Instead of taking these responsibilities, government has reduced its intervention to an unholy mix of ‘charity’, super-exploitation, enrichment of parasitic labour broking firms and corruption. Instead of creating real jobs to fulfil the real needs of the communities, in many cases, government departments hand out tenders to profit-driven labour brokers who then supply ‘volunteers’ who work ‘to make a contribution’ and gain work experience while getting paid a pittance if anything at all. WASP is right now working on bringing together the workers of the CWP throughout Gauteng province in a unified workers committee. 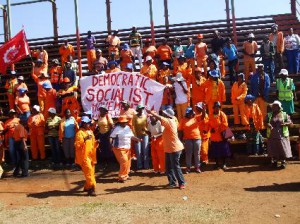 Meanwhile, working class communities are crying out to satisfy the bare necessities of life. In Wedela, a township a stones-throw away from the gold-mining giants deep shafts, the ANC-led council has in recent months cut off the electricity of hundreds who are not coping with the ever-increasing prices. Just months after the mineworkers’ strike movement of last year, and weeks after the united workers’ and community struggle against Harmony Gold’s lock-out and eviction of 6,000 workers, this was of course bound to provoke mass protests. The building of WASP is part of the agenda for the mostly young activists who are leading ‘Operation Khanyisa’ (‘Operation Switch On/ Light’) and protest marches. 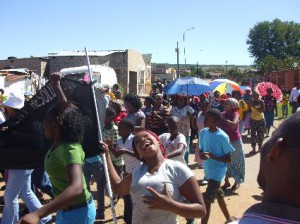 While the workers and unemployed are forced to search for firewood in the bushes and collect water from streams, contaminated by the mines’ pillage, these monopolies are making billion-dollar-profits. Still, jobs on the mines are in jeopardy. By July, 14,000 mineworkers in Rustenburg could be unemployed, if the world’s largest platinum producer Anglo Platinum has its way and pushes through a ‘restructuring’ to rescue its profit margins in the face of plummeting demand on the ailing world market. If carried through, it could unleash further attacks from other mining companies, e.g in gold where the price is also falling. For the capitalists, these are however temporary measures – at the workers’ expense. In the longer term, the mining barons are not worried – in the knowledge that the world’s largest mineral deposits – at an estimated value of at least $2,5 trilllion. The real danger for them lies elsewhere, in the likelihood of the renewed flaming up of conflict with the mineworkers.

The ANC government has made its pro-capitalist stance clear – nationalisation was over-explicitly rejected by the latest ANC congress in December, and President Zuma has declared ‘violent protest’ the state’s first priority when it comes to ‘combatting crime’. Meanwhile, trade union federation Cosatu, in alliance with the ANC, is torn by more and more violent tensions. The need to build WASP and the independent workers’ committees could not be more burning.

In a race against time, the DSM works hard to establish WASP and unite the many ongoing struggles. There is now the beginning of WASP structures in all nine provinces, with openings among several important layers of workers, for example in the municipal and transport sectors. Hopefully May Day can be the starting point for a nation-wide campaign for decent work and pay, housing, electricity and other basic services and for the nationalisation of the mining industry.