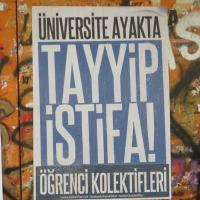 During two weeks of protest hundreds of thousands have taken to the streets. The slogan, “Tayyip istifar” – “Erdogan resign”, unified the protests from public sector workers to people alienated by government’s clampdown on drinking alcohol and kissing in public. It reached out to Kurdish people, who continue to face oppression. It included trade union activists, environmentalists who initiated the protests in Taksim Square. It also mobilised working class youth from the suburbs.

Erdogan tries to mobilise support amongst more conservative and religious people. He described hundreds of thousands of protesters as “a handful of looters” or “vandals”. Erdogan has now announced mass demonstrations in support of his government for Saturday, 15 June, in Ankara and Sunday, 16 June, in Istanbul. The timing of this is no accident. 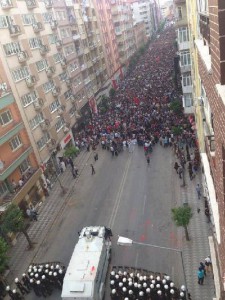 Exhausting battles with the police

Over two weeks working people and youth defended their protests against the police daily. Apart from the main squares in the cities, there were also hundreds of neighbourhoods where – without much media attention – thousands assembled at night. On almost each occasion they were attacked with tear gas.

The public sector strike on 4 and 5 June was not followed up by further action of the organised working class. Activists from left wing groups are organising the camps in the squares and in many ways leading the movement on a daily basis. However, none of the bigger organisations, parties or trade unions puts forward a strategy of how to advance the struggle.

Action committees or committees to defend the protests were formed, but mainly to deal with the day to day questions and mainly composed of left wing groups. This left the majority of the protesters without a voice.

Erdogan resign! – But how?

A bold strategy is necessary, to build the movement with assemblies and committees on all levels, including to defend the protests, to coordinate the struggle and to create a force to bring down the government and offer an alternative in the interests of workers, youth and poor people. Instead of allowing Erdogan to mobilise his support on conservative, Islamic issues, such a movement could undermine his support and win over all those suffering from Erdogan’s policies.

Unfortunately, even on the left, the demands were already being watered down. Over the last days they focussed on defending Gezi-Park and democratic demands, to bring those responsible for the police brutality to justice, and for the right to protest. All of that is necessary, but the limitation of the demands offers no strategy on how to fight for the aspirations, that brought people on the streets.

A majority of the protesters were young and alienated from all the main parties. This vacuum has to be filled by a new, democratic mass party armed with a socialist programme, where left forces like HDK, Halk Evleri and others could massively contribute.

In the absence of these factors the numbers of demonstrators went down slightly on Monday, 10 June. Erdogan seeks to exploit this weakness to regain control although this in turn may provoke a wave of struggle. 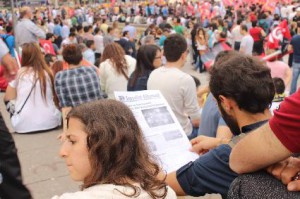 Sosyalist Alternatif (CWI Turkey) argues for protest now against the police attacks, for mass demonstrations in all cities on Saturday and for a national joint demonstration on Sunday in Istanbul to give Erdogan a strong answer and to prepare the ground for a one day general strike as a further step to fight for an end of the AKP’s government.