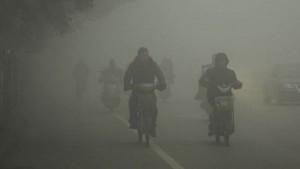 People in China’s cities are choking on smog. This past winter the capital Beijing, and other northern cities, suffered their worst air pollution readings on record. In mid-January the US embassy in Beijing, which irritates the Chinese regime by publishing its own widely watched statistics, said levels of PM2.5, tiny particulate matter that can lodge in the lungs causing serious damage, were 40 times the safe level set by the World Health Organisation (WHO).

On an expressway linking Beijing to Hong Kong and Macau, there were 40 car accidents in nine hours due to smog reducing visibility. The main causes of air pollution in China are coal burning, cars, construction sites, and the expansion of industry. China’s coal consumption has seen explosive growth, to 4.05 billion tons last year. China now burns almost as much coal as the rest of the world combined. Since the failed Copenhagen climate summit in 2009, China’s carbon emissions have almost doubled.

Facemasks are common in cities today. Air purifiers are also popular products for those who can afford them. Mike Murphy, CEO of Swiss company IQAir in China, says sales of household air purifiers tripled in the first months of this year. The lifestyles of children have also changed a lot: schools cancel outdoor activities; parents keep their kids at home. Rich families choose international schools as these have spent money on air filtering systems.

People are perplexed by the worsening air quality over the last couple of years. Improvements promised by the government have not materialised. Less than 1% of China’s 500 biggest cities meet WHO air-quality guidelines. According to the World Bank, 750,000 people die prematurely because of air pollution every year.

Parents are worried about the health of their children. Some company executives speak of a trend of losing talented people, as some middle-class and upper-class parents, and foreigners, are leaving China because of the pollution. But for most of the population – farmers, migrant workers and the poor – there is no choice but to stay and live with it.

In June, premier Li Keqiang announced ten new measures aimed at improving air quality, in an attempt to dampen popular anxiety. Heavy polluters must release detailed environmental information to the general public, and the government vowed to reduce major emissions at heavily polluting industries by more than 30% by the end of 2017. But similar promises have been made before and Li’s new measures contradict government efforts to maintain economic growth at 7-8%.

The Chinese ‘Communist’ Party (CCP) state does not have a unified position on these issues, however. Local governments pursue their own interests often in defiance of Beijing’s orders. They manipulate statistics and try to suppress information, including the protests against polluting industries. 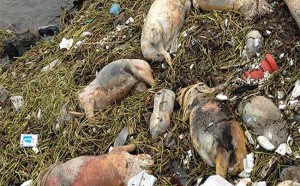 Earlier this year, over 16,000 dead pigs were found floating in the Huangpu river, which supplies one in five Shanghai residents with drinking water. The pigs were dumped by farmers upstream in Jiaxing, a major pig-farming region in neighbouring Zhejiang province. A few weeks later, the same area saw the outbreak of a new bird flu virus, H7N9, which has so far killed 37 people. The WHO warns this is “one of the most lethal flu viruses”.

Both examples show the dire effects of a farming industry run for profit: unsafe and over-crowded conditions, abuse of antibiotics and other chemicals. Researchers have uncovered abusive use of antibiotics in large quantities at major pig farms, with cocktails of drugs used. Some farmers feed organic arsenic to pigs as it makes them look pink and shiny, meaning more profits, despite the fact organic arsenic is a carcinogen.

The environmental ministry admitted for the first time, in a report issued in February this year, the existence of ‘cancer villages’ in China – with cancer rates high above the national average. This phenomenon has been recognised since 1998, but is denied by the CCP authorities. But this report was denounced as ‘inappropriate’ by top health officials at the March meeting of the National People’s Congress (China’s fake parliament). Instructions were sent out to local media to avoid using the term ‘cancer villages’.

Industrial pollution of drinking water, usually by factories built upstream, is the main cause of cancer villages. The factories discharge untreated sewage, containing high levels of heavy metals or other toxic substances, resulting in clusters of cancer illness. There are now 459 cancer villages in China, while the national death rate from cancer has increased 80% in the past 30 years to 2.7 million fatalities every year.

Rural China has also seen outbreaks of lead poisoning as a result of factories and smelters that dump their waste into rivers and landfills. Lead poisoning causes brain, kidney, liver, and nerve damage, and children are especially susceptible. In recent years, thousands of individual cases have been reported across at least nine provinces. A Human Rights Watch report in 2011 accused government officials of “arbitrarily limiting lead testing, withholding and possibly manipulating test results, denying proper treatment to children and adults and trying to silence parents and activists”.

The economic boom in China over the last 30 years has produced an acute environmental crisis. The country is grappling with seriously polluted air, water, land and food. According to a 2013 report, of the ten most polluted cities in the world, China has seven, including Beijing.

The government has hundreds of special farms supplying safe crops to the elite. This reinforces a vicious cycle of government inaction over pollution combined with repression against the victims. In 2008, a toxic milk powder scandal caused the death of six babies and resulted in tens of thousands of children getting kidney disease. The government used repression to silence parents’ groups who wanted to find out the truth behind the affair. Zhao Lianhai, whose own child was a victim, was sentenced to two-and-a-half years in jail because of his activism on this issue. 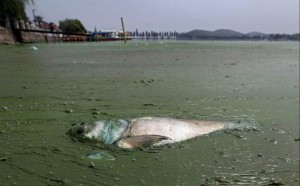 An official report showed that 90% of all environmental protests in 2012 were linked to water pollution. It found that 57.3% of the groundwater in 198 cities in 2012 was ‘bad’ or ‘extremely bad’. One third of rivers and 75% of lakes are seriously polluted, and around 1,000 lakes have disappeared. Unsafe drinking water is being used by 320 million people, and 190 million are sick every year due to water pollution.

The last two years have seen a big increase in environmental protests in China. In cities including Dalian, Tianjin, Xiamen and Kunming, thousands have protested against the building or running of chemical plants. The re-emergence of capitalism in China combines the worst features of neo-liberal capitalism together with repressive one-party dictatorship. It means chaos and an absence of even minimal democratic controls.

China now leads the world in the production of solar voltaic cells and wind turbines, but around two-thirds of capacity from its wind farms is wasted as the electricity grid lacks the technology to absorb it. The solar industry, which is mainly for export, has built up vast overcapacity and is also a huge consumer of coal power. A socialist solution is needed in order to solve this chaotic situation and to save millions of people’s lives – that is, the abolition of capitalism and democratic public control over the economy.