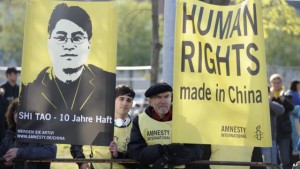 China has released jailed poet and author Shi Tao, who was imprisoned in 2005 based on information provided by US internet giant Yahoo. The case highlighted the close cooperation between US multinationals and China’s police state in suppressing free speech.

Shi was released with 15 months left to serve of his ten-year sentence for “leaking state secrets”. This is a widely used charge to incriminate regime critics, with a vast number of topics classified as “state secrets” in China – from the composition of its foreign exchange reserves to the real number of schoolchildren killed in the 2008 Sichuan earthquake.

Shi was detained after sending an e-mail overseas containing information on a crackdown on democracy advocates. Information supplied by Yahoo was used by state prosecutors to convict him. Shi, who worked as a freelance journalist contributing to a newspaper in Changsha, Hunan province, has told overseas reporters that he was treated “relatively well” in prison.

Wang Xiaoning, another dissident who was similarly convicted with the help of email content supplied by Yahoo, was released from prison in August last year after serving ten years for “subversion”. Wang had used his Yahoo e-mail account to spread essays calling for democratic rights and an end to one-party rule.

Yahoo executives who were summoned to testify before the US Congress claimed they were legally obligated to surrender information about their account holders to the Chinese authorities. But they claimed, somewhat ingenuously, they were unaware it would be used to obtain convictions of political dissidents. The company later apologized and in the case of Wang Xiaoning agreed to pay compensation after human rights campaigners mounted a lawsuit against Yahoo in the US.

The case shows the hypocrisy of capitalist big business and its claims to stand for free speech and democracy. Rather, large foreign companies share a common interest with the Chinese ‘communist’ dictatorship to maximise profits and suppress voices that could threaten the moneymaking ‘stability’ of the current regime.