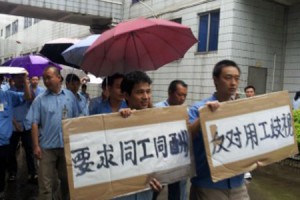 GUANGZHOU Over 100 migrant workers at Hong Kong-owned Luen Shing Industries Limited have been in dispute with the company since August. According to BaGongWatch the workers have staged daily demonstrations, with the protests continuing after almost two months. The company, in Guangdong’s provincial capital, makes molds for household goods, auto parts, and toys, including for McDonald’s happy meals.

The workers went on strike on 3 August after the employers introduced  discriminatory policies and a system of unequal pay. In protest, workers climbed onto the factory roof and threatened to jump off. Workers have attempted to lobby the local government and labour department officials to engage them in the conflict, with no success.

To support their protests Luen Shing workers created a microblog account entitled “Persevere to the end, Justice must prevail!”

The report on BaGongWatch states:

Luen Shing workers reblogged one post from the Shenzhen workers, who recounted the story of the a visit from local union representatives. After investigating the workers situation, the union representatives were found to be having a light-hearted dinner with the management of the plant and local government officials at an upscale club.

The Shenzhen workers asked sardonically, “Is this how the municipal union officials defend the rights of workers, at the table of the bosses?” Luen Shing workers replied in support, saying “those union officials, the government and capitalists are all in bed with each other!” 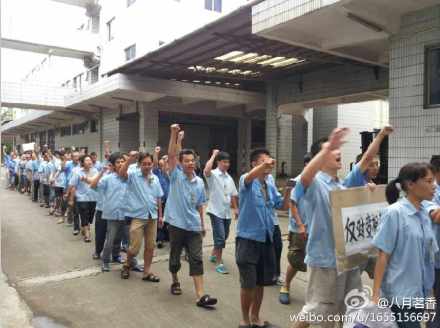